The transit method has proven invaluable for exoplanet detection, as the runaway success of the Kepler/K2 mission demonstrates. But stars where planets have been detected with this method are still capable of revealing further secrets. Consider Kepler-47. Here we have a circumbinary system some 3340 light years away in the direction of the constellation Cygnus, and as we are now learning about circumbinaries — planets that orbit two stars — the alignment of the orbital plane of the planet is likely to change with time.

Let’s pause for a moment on the value of the detection method. Transits detected in the lightcurve have helped us identify 10 transiting circumbinary planets, with the benefit of allowing astronomers to measure the planets’ radius even as variations in the duration of transits and deviations from the expected timing of the transits establish the circumbinary orbit.

At Kepler-47, we’re looking at the only known multi-planet circumbinary system. Moreover, the orbital period of the binary stars is in the range of 7.5 days, making this the shortest known orbital period for any known circumbinary system. The first two Kepler planets were detected in 2012, but San Diego State University astronomers now find a middle planet between these, Kepler-47d, its strengthening transit signal the result of orbital plane adjustment. In fact, the transit depth for the hitherto undetectable world has become the deepest of the three planets.

“We saw a hint of a third planet back in 2012, but with only one transit we needed more data to be sure. With an additional transit, the planet’s orbital period could be determined, and we were then able to uncover more transits that were hidden in the noise in the earlier data.”

And according to co-author and SDSU colleague William Welsh, this planet defied expectations by showing up not exterior to the previously known planets but between them. “We certainly didn’t expect it to be the largest planet in the system. This was almost shocking,” said Welsh. 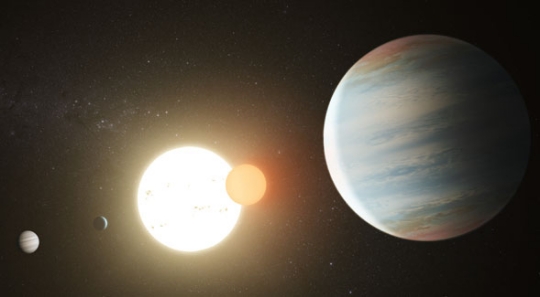 So what we see at Kepler-47, at least at this juncture, is an inner planet 3.1 times the size of Earth, in an orbit taking 49 days around this G-class star orbiting an M-dwarf. The other planets here are, respectively, 7 times Earth-size on an 187-day orbit (Kepler-47d), and 4.7 Earth-size with a 303 day orbit. Remember that we are talking about planets orbiting two stars, in a system compact enough to fit inside the Earth’s orbit of the Sun.

Kepler-47’s system may be telling us something interesting about planet formation. From the paper:

This is the first detection of a dynamically packed region in a circumbinary system, and it further confirms suspicions that planet formation and subsequent migration can proceed much like that around a single star, at least when far from the binary (Pierens & Nelson 2008, 2013; Kley & Haghighipour 2014, 2015). We also find that, although they are close to having integer commensurate periods, the middle and outer planets are not in a mean-motion resonance–and yet they are gravitationally interacting and exchanging angular momentum, as indicated by their anti-phased oscillations in inclination and eccentricity.

This nearly circular, co-planar, packed configuration is unlikely to have arisen as an outcome of strong gravitational scattering of the planets into their current orbits. Rather, the observations suggest that the planetary configuration is the result of relatively gentle migration in a circumbinary protoplanetary disk. 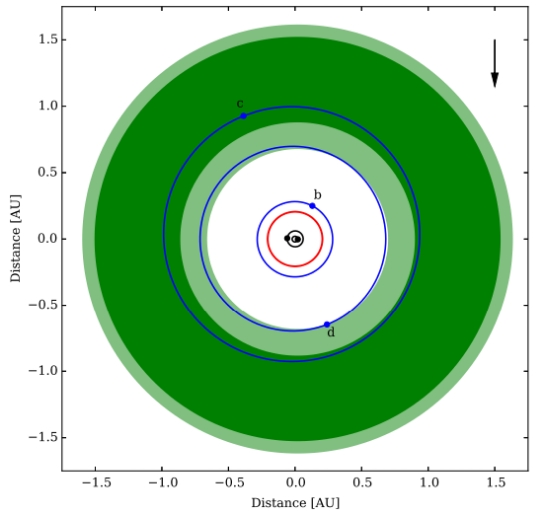 Image: This is Figure 28 from the paper. Caption: The conservative (dark green) and optimistic (light green) habitable zone regions are shown for the Kepler-47 system. The red circle shows the critical stability radius (Holman & Wiegert 1999), interior to which planetary orbits are most likely unstable. Credit: Jerome Orosz/William Welsh et al.

On the matter of habitability, there is little reason to expect life here. These are low density worlds, all three being less dense than Saturn, which implies substantial hydrogen and helium atmospheres. The outer planet receives an average insolation from its two stars that is 86.5 percent of what the Earth receives. But while that puts this world within the boundaries of the circumbinary habitable zone, the density implies a world somewhere in the range between Neptune and Saturn. The newly discovered middle planet skirts the inner edge of the habitable zone, but again its density makes life unlikely.