An Earth-sized Planet for TESS

If Kepler’s task was to give us a first statistical cut at the distribution of exoplanets in the galaxy, TESS (Transiting Exoplanet Survey Satellite) has a significantly different brief, to use its four cameras to study stars that are near and bright. Among these we may hope to find the first small, rocky planets close enough that their atmospheres may be examined by space telescopes and the coming generation of extremely large telescopes (ELTs) on Earth.

Thus the news that TESS has found its first planet of Earth size is heartening, even if the newly found world orbiting HD 21749 is in a tight 7.8 day orbit, making it anything but clement for life. What counts, of course, is the demonstrated ability of this mission to locate the small worlds we had hoped to find. Diana Dragomir is a postdoc at MIT’s Kavli Institute for Astrophysics and Space Research, as well as lead author on the paper describing the latest TESS planet:

“Because TESS monitors stars that are much closer and brighter, we can measure the mass of this planet in the very near future, whereas for Kepler’s Earth-sized planets, that was out of the question. So this new TESS discovery could lead to the first mass measurement of an Earth-sized planet. And we’re excited about what that mass could be. Will it be Earth’s mass? Or heavier? We don’t really know.” 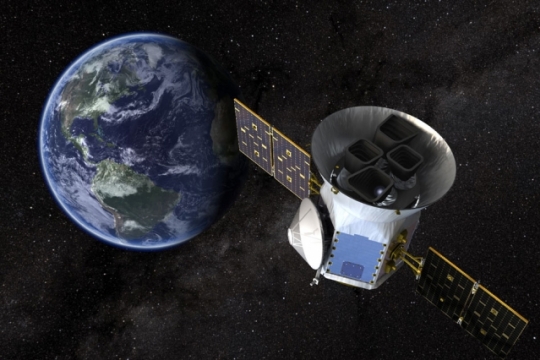 Dragomir considers the new planet around HD 21749, some 52 light years from Earth, a milestone in being the mission’s first planet of Earth size, though the expectation is for at least a few dozen more among the nearest and brightest stars as TESS continues sweeping the sky in overlapping sectors. This is a two-year mission that has already discovered 10 planets smaller than Neptune, four of which now have estimated masses. We’re in the early days of this mission, and that’s a good sign. As noted in the paper, “All of these discoveries are based on only the first two sectors of TESS data, suggesting many more are to be found.”

The star is a K-class dwarf in the southern constellation Reticulum that is known to host a second planet, recently confirmed, that is about three times the size of Earth. The paper reports on the discovery and confirmation of HD 21749b and the discovery of HD 21749c, but it is the latter, given its small size, that is receiving the lion’s share of coverage.

The paper notes that spectroscopic and photometric data have made the confirmation of the larger planet possible, while the Earth-sized HD 21749c would be a challenging observation for radial velocity confirmation, if possibly feasible with a dedicated campaign using the combination of the Very Large Telescope (VLT) and the ESPRESSO spectrograph. But density measurements of both planets should be useful. From the paper:

…the density of HD 21749b indicates that it is likely surrounded by a substantial atmosphere. By measuring the density of these two planets (and other similar planets that TESS may find) more precisely, we can begin to observationally constrain the maximum core mass a planet can reach during its formation before accreting a volatile envelope.

Next post: Probing Parenago: A Dialogue on Stellar Discontinuity