Corridor of Ice Identified on Titan

What an interesting thing Titan’s atmosphere turns out to be. A fine haze produced by sunlight breaking apart methane molecules settles continuously to the surface, leaving organic liquid and solid sediments. Titan also has large lakes, but these contain about a third of the necessary methane, available through evaporation, to replenish that atmosphere, which should be depleted over geological time scales. What produces Titan’s supply of methane?

It was to answer that question that Caitlin Griffith (University of Arizona Lunar and Planetary Laboratory) and colleagues embarked on a study of cryovolcano activity on Titan. Cryovolcanoes erupt not with molten rock but volatiles like water or methane, and thus could provide an answer if they are venting methane found in subsurface reservoirs. A feature on Titan’s surface called Sotra shows cryovolcanic features that imply past icy flows. 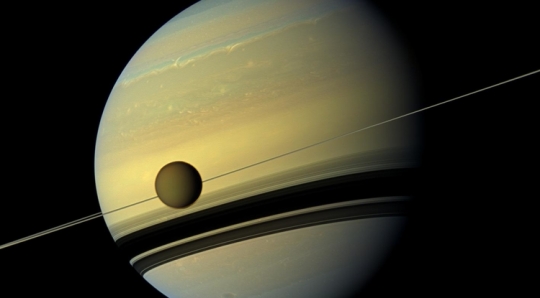 Image: A giant of a moon appears before a giant of a planet. Titan, Saturn’s largest moon, measures 5,150 km across and is larger than the planet Mercury. Credit: NASA/JPL-Caltech/Space Science Institute.

Thus the need for a study of Titan’s surface focusing on potential cryovolcano candidates. But this is tricky work, with weaker spectral features difficult to tease out because of the moon’s dense atmosphere. The work draws on tens of thousands of spectral images produced by Cassini’s Visible and Infrared Mapping Spectrometer. The team developed a principal components analysis (PCA) which allowed a more fine-grained breakdown of surface ice and sediments at the four wavelength bands that most clearly view Titan’s surface from orbit.

Out of this came the detection of an icy linear feature, a ‘corridor’ in Griffith’s words, and one that raises questions:

“This icy corridor is puzzling, because it doesn’t correlate with any surface features nor measurements of the subsurface. Given that our study and past work indicate that Titan is currently not volcanically active, the trace of the corridor is likely a vestige of the past. We detect this feature on steep slopes, but not on all slopes. This suggests that the icy corridor is currently eroding, potentially unveiling [the] presence of ice and organic strata.”

Based on the settling of sediments from the atmosphere, scientists expect the surface of Titan to be an ice bedrock coated with organic materials. What the team has found is that water ice is unevenly exposed in Titan’s tropical latitudes. The exposed icy materials do indeed appear as a long, linear corridor that stretches 6,300 kilometers, with the aforementioned Sotra region especially rich in water ice, and positioned roughly in the middle of the icy corridor.

All of this relates to the methane question, because the distribution of organic sediments on the surface is, the researchers believe, related to the history of Titan’s interior. We seem to be seeing evidence of a past, geologically active period. As Griffith notes, the icy feature does not correlate with topography as measured by Cassini’s radar measurements, nor does it seem to correlate with gravitational field anomalies likewise noted by Cassini, which offer a limited measure of subsurface composition. Just when did it appear, and how? From the paper:

The linearity of the icy corridor over a global scale presents the question of whether tectonic processes shaped this feature, thereby manifesting the processes that mould Titan’s surface and subsurface on a global scale. However, we find no evidence that Titan is geologically active, consistent with Titan’s long-wave topography and gravity field, which indicate a thick ice shell that is conductive rather than convective.

The answer may lie in the past, with methane surging up from below:

Measurements of the 13C/12C ratio in Titan’s atmosphere indicate that methane was injected into the atmosphere not more than 0.5–1 billion years ago. This age is consistent with the volume of dunes that would have accumulated since then, and suggest, consistent with evolution models of Titan’s interior, that a major cryovolcanic event occurred several million years ago. Potentially the topography that established the steep slopes of the icy corridor is a remnant of the time when Titan was geologically active. One example is the Sotra region, which displays cryovolcanic features, the steep terrain of which exhibits the strongest water-ice features.

Thus a past cryovolcanic event could explain Titan’s methane, with the ice corridor a telling reminder of these processes. Icy features in other parts of Titan are found only in local regions exposed by erosion or cratering, which suggests that if cryovolcanism remains an active process on Titan, it is not widespread. The team plans to use the same techniques to examine Titan’s poles, where the moon’s methane seas are prominent, to explore these ideas further.

Next post: 99942 Apophis: The Value of a Close Approach