I rarely get the chance to talk about the exotic dwarf planet Haumea, but it’s a personal favorite when it comes to the outer Solar System. That’s because of its odd shape (a bit like an American football), evidently the result of a catastrophic collision, which makes it an interesting object for close study if we can get a probe to it to examine its composition. Back in 2009, Joel Poncy and colleagues at Thales Alenia Space in France went to work on a fast orbiter mission, an extraordinarily tough challenge that would push our propulsion technologies hard.

But Haumea would surely repay close study. A rapid rotator (3.9 hours, itself a likely indicator of a turbulent past), it’s a dwarf world with a ring as well as two moons, the larger of which, Hi’iaka, is some 300 kilometers in diameter. Add to this the fact that Haumea is quite reflective, indicating a surface covered with crystalline water ice. We know we can get a probe to Haumea, but orbiting it is an order of magnitude tougher. But imagine what we might learn about planetesimal differentiation! For more, see Fast Orbiter to Haumea and Haumea: Technique and Rationale. I provide the citation below for the appearance of Poncy’s later paper in Acta Astronautica. 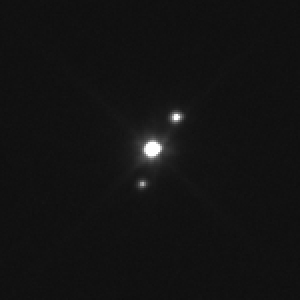 Meanwhile, we study Haumea from afar. Othon Cabo Winter (São Paulo State University) and colleagues home in on Haumea’s ring in a new paper in Monthly Notices of the Royal Astronomical Society. The ring may be evidence of Haumea’s violent past, but we’re learning that rings are anything but uncommon in the Solar System. Beyond Saturn we have identified many ringed objects, including Uranus, Neptune and Jupiter, as well as the asteroids Chariklo and Chiron, which orbit between Jupiter and Neptune. Doubtless we’ll find more.

Image: Haumea and its satellites, imaged on June 30, 2015 by the Hubble Space Telescope. The moon Hiʻiaka is above Haumea, with the other moon Namaka below. The ring is too narrow and tenuous to be visible. Credit: NASA / STScI.

The ring around Haumea has yet to be directly observed, but astronomers reported its existence in 2017 after studying the result of an occultation as Haumea passed in front of a distant star. You’ll recall how useful occultations turned out to be for the New Horizons mission, accurately determining the shape of Ultima Thule long before the spacecraft made its successful flyby. The thought after the Haumea occultation was that the ring was in a 1:3 resonance region, with the ring particles making one revolution every three times the dwarf planet rotates.

But how significant is this resonance? Winter and team examine the question by simulating the trajectories of particles in the ring region, showing that for the resonance to define the ring particle orbits, a degree of eccentricity would be demanded that is not found — the ring is both narrow and practically circular. Thus the resonance does not define the ring’s orbit; rather, the ring is in a stable orbit the authors identify near the resonance region. Says Winter:

“Our study isn’t observational. We did not directly observe the ring. No one ever has. Our study is entirely computational. Based on simulations using the available data on Haumea and the ring, subject to Newton’s law of gravitation, which describes the motions of the planets, we concluded that the ring isn’t in that region of space owing to the 1:3 resonance but owing to a family of stable periodic orbits.”

A bit more on the terminology here. The authors describe Haumea’s ring as being in a family of “first-kind periodic orbits.” The paper relies upon techniques developed by Poincaré to analyze the dynamics of the region in which the Haumea ring is located. Using Poincaré’s methodology, they explain that orbits of the first kind are those “originated from particles initially in stable circular orbits.” This distinguishes them from periodic orbits of the second kind, which are those in which “…the particles are in eccentric orbits in a mean motion resonance, the so-called resonant periodic orbits.” Stability arises either from a highly eccentric orbit forced by resonance or a low eccentricity orbit, likewise stable, but not forced by the resonance.

We wind up with an orbit for ring particles that is of the first kind in what the authors call an ‘island of stability.’ Other factors could influence the orbit, but the paper notes that a ring of only 70 kilometers in width would have to be extremely massive to itself reduce the eccentricity produced by the 1:3 resonance.

And the authors continue:

Collisions between the ring particles were also not considered in this work. They could allow large orbital eccentricities of particles at the 1:3 resonance to be damped and fit within the radial range of the ring. Nevertheless, particles at the ring borders would not remain confined, still needing a confining mechanism. However, independently of collisions, particles associated with first-kind periodic orbits define regions of stability that fit very well in size and location with Haumea’s ring. Therefore, this analysis suggests that Haumea’s ring is in a stable region associated with a first-kind periodic orbit instead of the 1:3 resonance.

Haumea’s ring was the first discovered around a Trans-Neptunian Object, and we should bear in mind how challenging these calculations have to be to account for the non-spherical nature of the parent body. We know that the ring plane lines up with Haumea’s equatorial plane as well as the orbital plane of the outer moon Hi’iaka. What Winter and colleagues have shown is that the ring particles are on circular orbits that are near but not actually inside the 1:3 resonance.

The paper is Winter et al., “On the location of the ring around the dwarf planet Haumea,” Monthly Notices of the Royal Astronomical Society Volume 484, Issue 3 (April 2019), pp. 3765–3771 (abstract). Also of interest: Araujo et al., “Rings under close encounters with the giant planets: Chariklo vs Chiron,” accepted for publication at MNRAS (preprint). Joel Poncy’s paper on a Haumea mission is “A preliminary assessment of an orbiter in the Haumean system: How quickly can a planetary orbiter reach such a distant target? Acta Astronautica Vol. 68, Issues 5-6 (March-April 2011), pp. 622-628 (abstract).