Recent tests of a ‘wafer-craft’, an early prototype for what may one day be the ‘starchip’ envisioned by scientists involved with the Breakthrough Starshot project, have been successful. The work grows out of a NASA-funded effort led by Philip Lubin (UC Santa Barbara), whose investigations into large scale directed energy systems began in 2009. Lubin went on to perform multiple studies for NASA’s Innovative Advanced Concepts program developing the idea that would become known as DEEP-IN (Directed Energy Propulsion for Interstellar Exploration). His NIAC Phase 1 report studied as one option beamed propulsion driving a wafer-scale spacecraft.

Renamed Starlight, the proposal went on to Phase II funding as well as support from the private sector. A subsequent review by Breakthrough Initiatives led to endorsement of the concept within its Breakthrough Starshot effort. Breakthrough is devoting $100 million to studying the viability of sending a ‘starchip’ to a nearby star such as Proxima Centauri, a mission that, moving at 20 percent of lightspeed through laser-beamed propulsion, would arrive at its target within 20 years as opposed to the tens of thousands of years required for chemical propulsion.

But back to that prototype wafer-scale spacecraft, whose launch was conducted in collaboration with the United States Naval Academy. The craft rose into the stratosphere above Pennsylvania via balloon on April 12, 2019 — the 50th anniversary of the Gagarin flight — reaching an altitude of 32 kilometers. The test is part of what Lubin calls “a long-term program to develop miniature spacecraft for interplanetary and eventually for interstellar flight.”

Nic Rupert, a development engineer at UC Santa Barbara, describes the wafer-craft in its current incarnation:

“It was designed to have many of the functions of much larger spacecraft, such as imaging, data transmission, including laser communications, attitude determination and magnetic field sensing. Due to the rapid advancements in microelectronics we can shrink a spacecraft into a much smaller format than has been done before for specialized applications such as ours.” 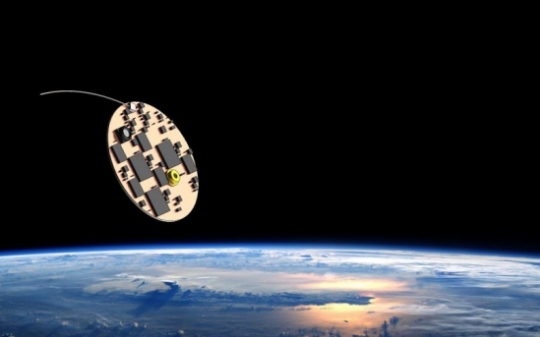 The good news is that the chip performed exceptionally well, returning over 4,000 images of Earth by way of testing what may eventually emerge as a space technology that could turn interstellar. The process is iterative, working with off-the-shelf components that can be pushed to increasingly difficult conditions that will test the wafer-craft’s viability under extreme conditions of temperature and radiation, as well as its potential to survive impact with dust particles.

In other words, to get to ‘starchips,’ we must first get to ‘spacechips,’ and that begins with balloon flights well within the atmosphere to shake out early data on performance. The goal: A one-gram chip that contains within itself a functional spacecraft. At UC-Santa Barbara, an undergraduate group drawing on students from physics, engineering, chemistry and biology is conducting the balloon flights that may result in future, mass-produced interstellar probes.

This news release from UC-Santa Barbara notes that the ramping up of testing points to a suborbital flight next year. Early applications of the technology should involve missions closer to home; indeed, a laser beaming infrastructure would have applications for fast interplanetary travel as well as planetary defense against asteroids and other space debris. Thus testing funded by NASA and private foundations examines the viability of miniaturized spacecraft that, given the beaming resources, could one day give us a close-up look at Proxima Centauri b.

For more on the Starlight effort, visit its website.

Tomorrow I’ll keep the focus on fast interstellar missions in the form of some interesting ideas from a paper by Bing Zhang, an astrophysicist from the University of Nevada, on what he is calling ‘relativistic astronomy’ and its possibilities on the way to distant destinations.