The term ‘destruction radius’ around a star sounds like something out of a generic science fiction movie, probably one with lots of laser battles and starship crews dressed in capes. It’s a descriptive phrase as used in this University of Warwick (UK) news release, but let’s go with ‘Roche radius’ instead. Dimitri Veras, a physicist at the university, probes the term in the context of white dwarfs in a new paper for Monthly Notices of the Royal Astronomical Society. Veras and collaborators are looking at what happens after the challenging transition between red giant and white dwarf, a time when planets will be in high turmoil.

The idea is to model the tidal forces that occur once a star collapses into a super-dense white dwarf, blowing away its outer layers in the process. We see the clear potential for dragging planets into new orbits, with some pushed out of their stellar systems entirely. The Roche radius, or limit, is the distance from the star where a self-gravitating object will disintegrate because of tidal forces, forming a disk of debris around the star. It’s not limited to white dwarfs, of course, and can be applied to the tidal forces acting between any two celestial bodies.

White dwarfs are generally comparable in size to the Earth, while their Roche limit extends outwards to about one stellar radius. They’re also known to have metallic debris in their photosphere, presumably from objects pulled within the Roche radius. Learning about the tidal interactions of such worlds will help us calculate a planet’s inward and/or outward drift, and determine whether an object in a particular orbit will reach the Roche radius and be destroyed. 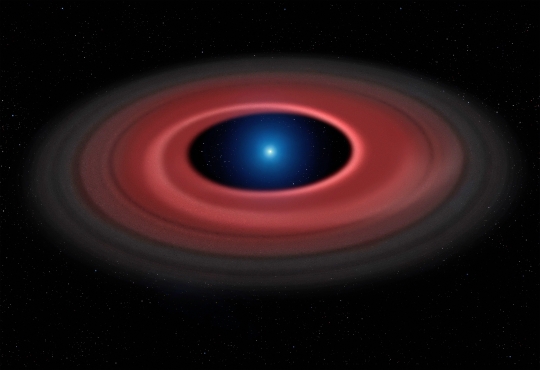 Image: An asteroid torn apart by the strong gravity of a white dwarf has formed a ring of dust particles and debris orbiting the Earth-sized burnt out stellar core. Credit: University of Warwick/Mark Garlick.

I’m not aware of a lot of work on tidal effects in white dwarf scenarios, but Veras believes that now is the time to begin such investigations, for the number of planets around white dwarfs is sure to rise with the advent of new extremely large telescopes (ELTs). We learn here that according to the authors’ models, the more massive a planet, the more likely it will be destroyed by these tidal forces. We do have to factor in the fact that some simplifications needed to run these calculations will need to be further developed to help us characterize such systems.

“Our study, while sophisticated in several respects, only treats homogenous rocky planets that are consistent in their structure throughout,” adds Veras. “A multi-layer planet, like Earth, would be significantly more complicated to calculate but we are investigating the feasibility of doing so too.”

How likely are planets or asteroids to be pulled into the Roche limit? Tidal forces modeled here imply that an object of low viscosity — think of Enceladus as a local example — is ultimately absorbed by the star if it orbits at separations within five times the distance between the center of the white dwarf and the Roche limit. By contrast, a high viscosity world is likely to be eventually swallowed into the star only if it is found at distances closer than twice the separation between the center of the white dwarf and Roche radius. Viscosity counts. Observationally, we might be on the lookout for disruptions in white dwarf disks just outside the Roche limit.

By ‘high viscosity world,’ the paper refers to planets with a dense core of heavy elements, such as the iron- and nickel-rich SDSS J122859.93+104032.9, recently found in a star-grazing 2-hour orbit around a white dwarf by astronomers at the same university (for more, see White Dwarf Debris Suggests a Common Destiny — Veras was on the team that did this work).

The current work suggests that this object has avoided falling into the star because of its small size. Or as the paper puts it: “Because the magnitude of the stellar tides scales as the mass of the perturber, the orbital dynamics of the asteroids in the WD 1145+017 and SDSS J1228+1040 systems are unaffected by stellar tides.” The takeaway: The best chance for survival near the white dwarf is to be small and dense, packed with heavy elements. And a little distance doesn’t hurt. A distance of just .13 AU, a third of the distance between Mercury and the Sun, is enough to ensure survival for the kind of rocky, homogeneous planet this paper models.

We learn that massive super-Earths are more readily disrupted than lower-mass planets, while as seen above, planets of higher viscosity are more likely to survive than their low-viscosity counterparts. We’re dealing with a challenging environment indeed for surviving objects, but one that repays investigation considering its ubiquity. As the paper points out, almost every known exoplanet currently orbits a star that will become a white dwarf. The authors continue:

Exo-asteroids are already observed orbiting two white dwarfs in real time… Planets which then survive to the white dwarf phase play a crucial role in frequently shepherding asteroids and their observable detritus on to white dwarf atmospheres, even if the planets themselves lie just outside of the narrow range of detectability. Further, planets themselves may occasionally shower a white dwarf with metal constituents through post-impact crater ejecta and when the planetary orbit grazes the star’s Roche radius…

The paper’s goal is to create a computational framework for future observations that can grow out of this early study of a two-body system comprising an idealized solid planet and a white dwarf. Of note: “…the boundary between survival and destruction is likely to be fractal and chaotic,” reinforcing the challenge of characterizing these maximally stressed stellar systems.

An interesting question: Can second- or third-generation planets form from white dwarf debris disks? The paper briefly considers the possibility and notes that such worlds would be in near-circular orbits and possibly be out of the reach of detection by current technologies.