Another reminder that the days of the lone scientist making breakthroughs in his or her solitary lab are today counterbalanced by the vast team effort required for many experiments to continue. Thus the armies involved in gravitational wave astronomy, and the demands for big money and large populations of researchers at our particle accelerators. So, too, with space exploration, as the arrival of early results from New Horizons in the journals is making clear.

We now have a paper on our mission to Pluto/Charon and the Kuiper Belt that bears the stamp of more than 200 co-authors, representing 40 institutions. How could it be otherwise if we are to credit the many team members who played a role? As the New Horizons site notes: “[Mission principal investigator Alan] Stern’s paper includes authors from the science, spacecraft, operations, mission design, management and communications teams, as well as collaborators, such as contributing scientist and stereo imaging specialist (and legendary Queen guitarist) Brian May, NASA Planetary Division Director Lori Glaze, NASA Chief Scientist Jim Green, and NASA Associate Administrator for the Science Mission Directorate Thomas Zurbuchen.”

New Horizons still has the capacity to surprise us, or maybe ‘awe’ is the better word. That’s what I felt when I saw the now familiar shape of Ultima Thule highlighted on the May 17 Science cover in an image that shows us what the object would look like to the human eye. The paper presents the first peer-reviewed scientific results and interpretations of Ultima a scant four months after the flyby.

As to the beauty of that cover image, something like this was far from my mind during the 2015 Pluto/Charon flyby, when the occasional talk ran to an extended mission and a new Kuiper Belt target. I wouldn’t have expected anything with this degree of clarity or depth of scientific return from what was at that time only a possible future rendezvous, and one that would not be easy to realize. Another indication of how outstanding New Horizons has been and continues to be. 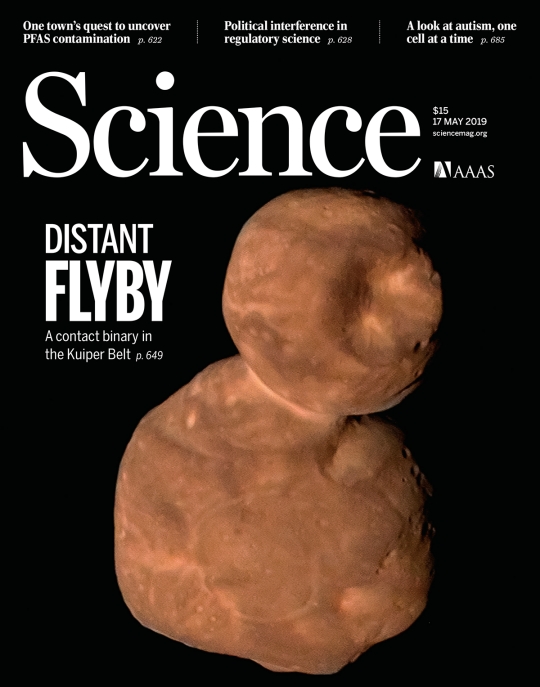 Image: This composite image of the primordial contact binary Kuiper Belt Object 2014 MU69 (nicknamed Ultima Thule) – featured on the cover of the May 17 issue of the journal Science – was compiled from data obtained by NASA’s New Horizons spacecraft as it flew by the object on Jan. 1, 2019. The image combines enhanced color data (close to what the human eye would see) with detailed high-resolution panchromatic pictures. Credit: NASA/Johns Hopkins University Applied Physics Laboratory/Southwest Research Institute//Roman Tkachenko.

I’d be hard-pressed to come up with a space-themed cover from Science that’s more memorable than that. For that matter, here’s an entertaining thought: What would the most memorable space-themed Science cover of, say, 2075 look like? Or 2250? Let’s hope we’re vigorously exploring regions from the Oort Cloud outward by the latter year.

Meanwhile, New Horizons is helping us look back toward our system’s earliest days.

“We’re looking into the well-preserved remnants of the ancient past,” says Stern. “There is no doubt that the discoveries made about Ultima Thule are going to advance theories of solar system formation.”

Indeed. The two lobes of this 36-kilometer long object include an oddly flat surface (nicknamed ‘Ultima’) and the much rounder ‘Thule,’ the two connected by a ‘neck’ that raises the question of how the KBO originally formed. We seem to be looking at a low velocity merger of two objects that had originally been in rotation. Their merger is important; remember, we’re dealing with an ancient planetesimal. From the paper:

For MU69 ’s two lobes to reach their current, merged spin state, they must have lost angular momentum if they initially formed as co-orbiting bodies. The lack of detected satellites of MU69 may imply ancient angular momentum sink(s) via (i) the ejection of formerly co-orbiting smaller bodies by Ultima and Thule, (ii) gas drag, or both. This suggests that contact binaries may be rare in CCKBO [Cold Classical Kuiper Belt Object] systems with orbiting satellites. Another possibility, however, is that the lobes Ultima and Thule impacted one another multiple times, shedding mass along with angular momentum before making final contact. But the alignment of the principal axes of MU69 ’s two lobes tends to disfavor this hypothesis.

Also interesting is the possibility of tidal locking of the two lobes before their merger:

In contrast, tidal locking could quite plausibly have produced the principal axis alignment we observe, once the co-orbiting bodies were close enough and spin-orbit coupling was most effective… Gas drag could also have played a role in fostering the observed coplanar alignment of the Ultima and Thule lobes… Post-merger impacts may have also somewhat affected the observed, final angular momentum state.

And let’s consider what the science team has to say about Ultima Thule’s color. Like many other objects found in the Kuiper Belt, it’s red, much redder than Pluto. This obviously has significant interest because of what it implies about the organic materials on the surface and how they are being modified by solar radiation. Here the mixture of surface organics differs from other icy objects previously examined, though not all:

There are key color slope similarities between the spectrum of MU69 and those of the KBO (55638) 2002 VE 95 (45) and the escaped KBO 5145 Pholus… Also, these objects all exhibit an absorption band near 2.3 mm, tentatively attributed to methanol (CH3OH) or perhaps more complex organic molecules intermediate in mass between simple molecular ices and tholins… Similar spectral features are also apparent on the large, dark red equatorial region of Pluto informally called Cthulhu… suggesting similarities in the chemical feedstock and processes that could operate there and on MU69.

The paper points out that we see evidence for H2O ice in the form of shallow spectral absorption features, indicating low abundance in the object’s upper surface, as compared with planetary satellites and even some Kuiper Belt objects with clearer H2O detections. As expected, we do not see the spectral signatures of volatile ices such as carbon monoxide, nitrogen, ammonia or methane, which were observed at Pluto. These were not expected at MU69 “…owing to the ready thermally driven escape of such ices from this object over time.”

We’re left with a lot of unanswered questions, including the nature and origin of surface features like ‘Maryland crater,’ the largest (8 kilometer wide) scar on the KBO, likely the result of an impact, and the various bright spots and patches. How much of the pitted surface can be related to outgassing via sublimation, or material falling into already existing underground spaces? Bear in mind that the data return from New Horizons is to continue until late summer of 2020. Meanwhile, the spacecraft continues to measure the brightness of other Kuiper Belt objects while also mapping the charged-particle radiation and dust environment of its surroundings.