In a white paper submitted to the Decadal Survey on Astronomy and Astrophysics (Astro2020), Philip Horzempa (LeMoyne College) suggests using technology originally developed for the NASA Space Interferometry Mission (SIM), along with subsequent advances, in a mission designed to exploit astrometry as an exoplanet detection mode. I’m homing in on astrometry itself in this post rather than the mission concept, for the technique may be coming into its own as an exoplanet detection method, and I’m interested in new ways to exploit it.

Astrometry is all about refining our measurement of a star’s position in the sky. When I talk to people about detecting exoplanets, I find that many confuse astrometry with radial velocity, for in loose explanatory terminology, both refer to measuring the ‘wobble’ a planet induces on a star. But radial velocity examines Doppler effects in a star’s spectrum as the star moves toward and then away from us, while astrometry looks for tiny changes in the position of the star in the sky, especially the kind of periodic shift that implies an otherwise unseen planet.

The problem has always been the level of precision needed to detect such minute variations. Long-time Centauri Dreams readers will recall Peter Van de Kamp’s work at Swarthmore on what he believed to be a planet detection around Barnard’s Star, but we can also mention Sarah Lippincott’s efforts at the same observatory on Lalande 21185. Kaj Strand, likewise working at Sproul Observatory at Swarthmore, thought he had detected a planet orbiting 61 Cygni all the way back in 1943. Instrumentation-induced errors unfortunately made these detections unlikely.

But astrometry has major advantages if we can reach the necessary accuracy, which is Horzempa’s point. The Gaia mission makes the case that astrometry is already in play in the exoplanet hunt. Thus the mission’s detections of velocity anomalies at Barnard’s Star, Tau Ceti and Ross 128. Gaia also found evidence for a possible gas giant around Epsilon Indi. For more on this, see Kervella et al., “Stellar and Substellar Companions of Nearby Stars from Gaia DR2,” Astronomy & Astrophysics Volume 623, A72 (March 2019). Abstract. 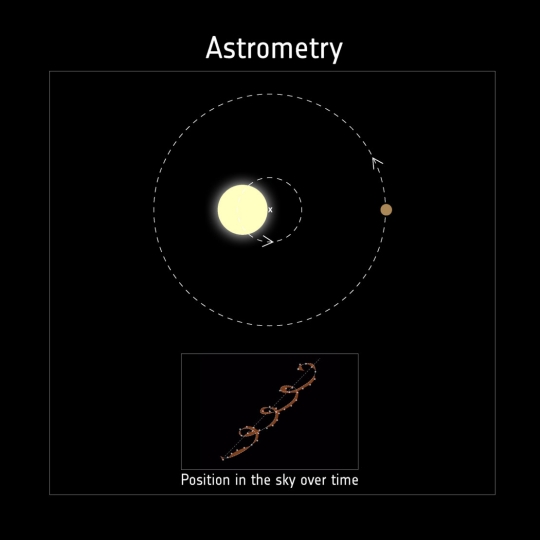 Image: Astrometry is the method that detects the motion of a star by making precise measurements of its position on the sky. This technique can also be used to identify planets around a star by measuring tiny changes in the star’s position as it wobbles around the center of mass of the planetary system. ESA’s Gaia mission, through its unprecedented all-sky survey of the position, brightness and motion of over one billion stars, is generating a large dataset from which exoplanets will be found, either through observed changes in a star’s position on the sky due to planets orbiting around it, or by a dip in its brightness as a planet transits its face. Credit: ESA.

What is significant here is that an era of astrometry 50 to 100 times more precise than Gaia may be at hand. Recall that minutes of arc are used to describe small angles. A circle of 360 degrees can be divided up into arcminutes and then arcseconds (1/60th of an arcminute). A milliarcsecond, then, is one-thousandth of an arcsecond, and a microarcsecond is one millionth of an arcsecond. You can see from this the precision needed for space-based astrometry.

Horzempa believes we are ready for 0.1 micro-arcsecond (μas), or 100 nano-arcseconds (nas) astrometry, a level anticipated for NASA’s canceled Space Interferometry Mission, and one for which hardware had already been constructed. Incorporating advances in laser metrology engineering since 2010, the Star Watch mission he is proposing would leverage the SIM work and make astrometry a valuable tool for complementing radial velocity and transit work. High-definition astrometry at 100 nas, he argues, is the best way to achieve the goal stated in a National Academy of Sciences’ 2018 report, which calls for developing ways to detect and characterize terrestrial-class planets in orbit around Sun-like stars.

Gaia is able to measure the position of brighter objects to a precision of 5 μas, with proper motions established down to 3.5 μas per year. For the faintest stars (magnitude 20.5), reports the European Space Agency, several hundred μas is the working range. Bear in mind that, according to the NAS report, 20 μas is a level of precision “sufficient to detect gas giant planets amenable to direct imaging follow-up with GSMTs” [giant segmented mirror telescopes].

If 10 microarcseconds is the size of a euro coin on the Moon as viewed from Earth, imagine what might be done with 100 nano-arcseconds, a high-definition astrometry that would offer many advantages over conventional radial velocity studies. Radial velocity can only offer a minimum mass determination because we cannot know the angle of inclination of unseen planets, and thus don’t know whether we are seeing a system edge-on or at any other angle.

Horzempa’s case is that astrometry can be used to tune up such radial velocity detections and tease out other worlds in the same systems that are undetected by RV. A case in point is Tau Ceti, which raises questions based on radial velocity work alone. From the white paper, where the author notes that this is a system that has been thought to hold 4 super-Earths::

This would be the case only if the RV m(sin i) mass values are the true values. However, if one assumes that the invariant plane for the system is the same as that of the observed disk (40 degrees), then the masses would range from 2.5 to 10 Me, putting them in the sub-Neptune to Neptune class. That would still be an interesting system but it would not be a system of super Earths. High-Definition astrometry will bring clarity, as these inner worlds of tau Ceti, if they exist, would generate signals that ranged from 1 to 15 uas, well within the reach of the next-generation 100 nano-arcsecond Probe. As a bonus, the Star Watch mission would be able to detect any true terrestrial worlds in the tau Ceti system.

Horzempa cites other intriguing possibilities, such as Zeta Reticuli, a star not known to have any planets through transit or radial velocity methods. Orbital inclination could rule out a transit detection in any case, while smaller planets might be too difficult a catch for RV around this binary system of two G-class stars in a wide orbit. 100-nas astrometry would be able, however, to detect Earth-class planets if they are there around either or both stars. If we are seeing ‘face-on’ systems, astrometry may be the only detection method applicable here.

There is no question about the advantages astrometry presents in being able to measure the true mass of planets it detects as opposed to a minimum mass, and as Horzempa writes, “…it will provide knowledge of the coplanarity of exoplanet systems, and it will discover extremely rare and valuable) planetary system ‘oddballs.’” All this shows the refinement of a method that has disappointed in the past. From the NAS report:

Astrometry has a spotty history involving exoplanet false positive detections and the cancellation of the Space Interferometry Mission. Only two “high-confidence” exoplanets have been discovered with this technique (Muterspaugh et al., 2010), neither of which has been independently confirmed. Despite its intrinsic merit, astrometry has not been viable as a search technique, given that a space mission is needed for large samples and low-mass planets.

It is a space mission that Horzempa now calls for, one building on technology developed for the Space Interferometry Mission and taking astrometry to unpreceded levels of precision. It is far too early to know how the idea will be received in the space community, but given the movement of astrometry toward the 100-nas level, a case can be made for supplementing existing methods with a strategy that at long last is beginning to deliver on its exoplanet promise. We’ll follow the progress of both astrometric measurement and this Star Watch mission concept with interest.

The paper is Horzempa, “High Definition Astrometry,” submitted to Astro2020 (Decadal Survey on Astronomy and Astrophysics) and available as a preprint.