I’m always interested in hearing about new ways to mine our abundant datasets. Who knows how many planets may yet turn up in the original Kepler and K2 data, once we’ve applied different algorithms crafted to tease out their evanescent signatures. On the broader front, who knows how long we’ll be making new discoveries with the Cassini data, gathered in such spectacular fashion over its run of orbital operations around Saturn. And we can anticipate that, locked up in archival materials from our great observatories, various discoveries still lurk.

Assuming, of course, we know how to find them and, just as important, how to confirm that we’re not just looking at noise. What scientists at the Max Planck Institute for Solar System Research (MPS), the Georg August University of Göttingen, and the Sonneberg Observatory have come up with is 18 new planets roughly of Earth size that they’ve dug out of K2, looking at 517 stars that, on the basis of earlier analysis, had already been determined to host at least one planet.

The Kepler mission was jeopardized by the failure of critical system components in its reaction wheel system, out of which emerged K2, looking not at the original 156,000 target stars but at a series of fields and a total of more than 100,000 stars for which light curves could be observed. None of the 18 new worlds were detected in earlier analysis because the search algorithms in play were not sensitive enough. But René Heller (MPS) and Michael Hippke (Sonneberg Observatory), working with Kai Rodenbeck (University of Göttingen) believed the sensitivity of the transit method would be enhanced by modeling a more realistic light curve.

“Standard search algorithms attempt to identify sudden drops in brightness,” explains Heller. “In reality, however, a stellar disk appears slightly darker at the edge than in the center. When a planet moves in front of a star, it therefore initially blocks less starlight than at the mid-time of the transit. The maximum dimming of the star occurs in the center of the transit just before the star becomes gradually brighter again.”

Most of the confirmed planets and those yet to be confirmed from both the original Kepler mission and K2 have been examined with a transit search algorithm called BLS — box least squares — in which, like other algorithms in play, the software looks for box-like decreases in flux from the light curve of the star. Heller and Hippke developed TLS — transit least squares — specifically to look for smaller planets by modeling the stellar limb darkening Heller mentioned above. The method is optimized for the detection of shallow periodic transits. The scientists believe the false-positive rate is suppressed and signal detection enhanced by this method.

In contrast to BLS, the test function of TLS is not a box, but an analytical model of a transit light curve… As a consequence, the residuals between the TLS search function and the observed data are substantially smaller than the residuals obtained with BLS or similar box-like algorithms, resulting in an enhancement of the signal detection efficiency for TLS, in particular for weak signals. 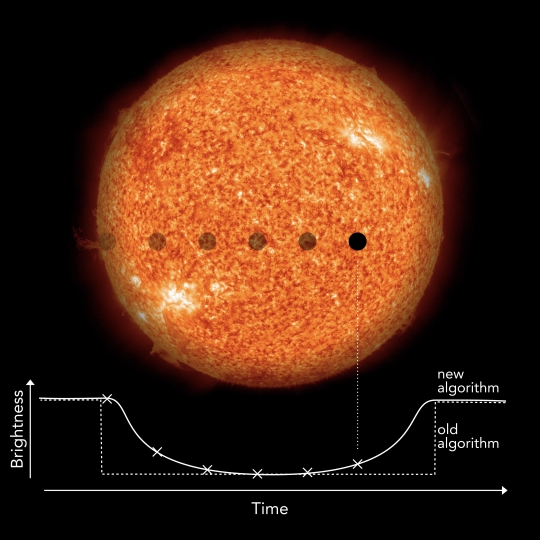 Image: If the orbit of an extrasolar planet is aligned in such a way that it passes in front of its star when viewed from Earth, the planet blocks out a small fraction of the star light in a very characteristic way. This process, which typically lasts only a few hours, is called a transit. From the frequency of this periodic dimming event, astronomers directly measure the length of the year on the planet, and from the transit depth they estimate the size ratio between planet and star. The new algorithm from Heller, Rodenbeck, and Hippke does not search for abrupt drops in brightness like previous standard algorithms, but for the characteristic, gradual dimming and recovery. This makes the new transit search algorithm much more sensitive to small planets the size of the Earth. Credit: © NASA/SDO (Sun), MPS/René Heller.

What we find in this initial cut using TLS is 18 planets that have been overlooked in previous work. The new worlds turn out to be, in most of the systems studied, the smallest planets, and most of them orbit their star closer than the previously known planetary companions. So with one exception we’re talking about planets with temperatures between 100 and 1,000 degrees Celsius. The exception is an apparent super-Earth (EPIC 201238110.02) circling a red dwarf star possibly in its habitable zone.

A system that stands out is that around the star known as K2-32. Heller and Hippke are able to identify a fourth transiting world here to join the three Neptune-size planets already known, this one with a radius roughly the size of Earth’s. With four planets orbiting it, K2-32 joins a list of about a dozen K2 stars with four or more transiting planet candidates. As the paper notes, only K2-138 has been found to host five such planets, all in super-Earth to sub-Neptune range.

The authors discuss the K2-32 system in detail in the first of two new papers, with the second examining the 17 other planets their methods have uncovered. Here we find worlds ranging from 0.7 Earth radii to 2.2 R⊕. That smallest world (EPIC 201497682.03) is the second smallest ever discovered with K2. Half of the planets are smaller than 1.2 Earth radius.

The success of the TLS methodology is provocative and leads to expectations of further discoveries. After all, beyond the K2 data, we have thousands of datasets for other stars. From the paper:

Based on our discovery rate of one new planet around about 3.5 % of all stars from K2 with previously known planets, we expect that TLS can find another 100 small planets around the thousands of stars with planets and candidates from the Kepler primary mission that have been missed in previous searches. 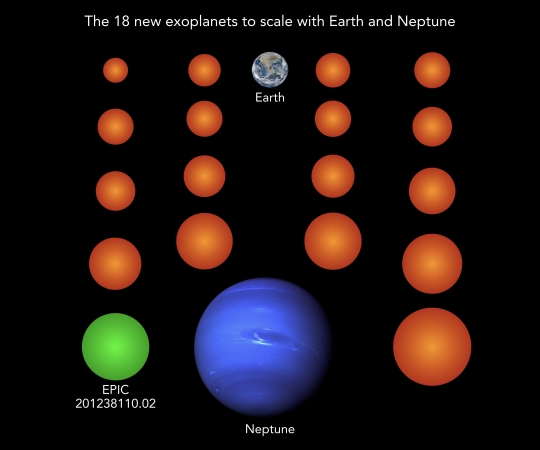 Image: Almost all known exoplanets are larger than Earth and typically as large as the gas planet Neptune. The 18 newly discovered planets (here in orange and green), for comparison, are much smaller than Neptune, three of them even smaller than Earth and two more as large as Earth. Planet EPIC 201238110.02 is the only one of the new planets cool enough to potentially host liquid water on its surface. Credit: © NASA/JPL (Neptune), NASA/NOAA/GSFC/Suomi NPP/VIIRS/Norman Kuring (Earth), MPS/René Heller

The papers are Heller, Hippke & Rodenbeck, “Transit least-squares survey. I. Discovery and validation of an Earth-sized planet in the four-planet system K2-32 near the 1:2:5:7 resonance,” Astronomy & Astrophysics, 625, A31 (abstract); and “Transit least-squares survey. II. Discovery and validation of 17 new sub- to super-Earth-sized planets in multi-planet systems from K2,” Astronomy & Astrophysics, 2019, in press (abstract).

Next post: A Comet Family with Implications for Earth’s Water