Into the Neptunian Desert

A planet labeled NGTS-4b has turned up in a data space where astronomers had not expected it, the so-called ‘Neptunian desert.’ Three times Earth radius and about 20 percent smaller than Neptune, the world was discovered with data from the Next-Generation Transit Survey (NGTS), which specializes in transiting worlds around bright stars, by researchers from the University of Warwick. It turns out to be a scorcher, with temperatures in the range of 1,000 degrees Celsius.

NGTS-4b is 20 times as massive as the Earth, and its orbit takes it around its star, a K-dwarf 920 light years out, every 1.3 days. The planet is getting attention not so much because of what it is but where it is. Lead author Richard West (University of Warwick) comments:

“This planet must be tough – it is right in the zone where we expected Neptune-sized planets could not survive. It is truly remarkable that we found a transiting planet via a star dimming by less than 0.2% – this has never been done before by telescopes on the ground, and it was great to find after working on this project for a year. We are now scouring out data to see if we can see any more planets in the Neptune Desert – perhaps the desert is greener than was once thought.” 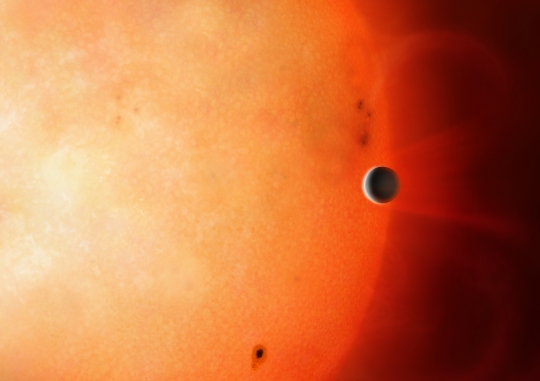 The paper on NGTS-4b has me thinking about all of our exoplanet detection methods in terms of their strengths and weaknesses, for there are some things that each of them can’t do well. Consider Jupiter-class worlds in orbits comparable to the Solar System’s largest planet. Depending on where the planet was in its orbit, an astronomer might look for a transit of such a world for years and never see it, even if it were the dominant planet in its system.

Even an Earth-sized planet in a habitable zone comparable to the Sun’s is going to take a year or so to complete its orbit, so we’d need several years to confirm it. When the exoplanet hunt began to take off in the energizing months and years after the discovery of 51 Pegasi b, we were finding ‘hot Jupiters’ in unexpectedly close orbits and more than a few of them. Here again observational bias was in play — we found these early on because radial velocity methods could detect these more easily than the tougher, smaller targets further out in the system.

But the Neptunian desert does not seem to be the result of observational bias. What we discover in looking at Kepler statistics is that there are few short-period Neptune-sized worlds, a ‘desert’ that the paper on this work defines as a lack of exoplanets with masses around 0.1 Jupiter mass and orbital periods less than 2-4 days. The reason this isn’t considered observational bias is that such planets should be easy to spot, and we’ve found many Neptunes with longer orbits from missions like Kepler and CoRoT. We may still find, however, that short-period Neptunes produce transits too shallow for most ground-based surveys to detect.

The issue of ‘deserts’ may well remind you of the better known ‘brown dwarf desert,’ which refers to the lack of such objects in orbits closer than 5 AU around solar mass stars. This desert turned up statistically at a time when numerous free-floating brown dwarfs were being found. Explanations include the possibility of brown dwarf migration into the primary star, but we’re a long way from fully understanding migration within a protoplanetary disk. Various formation models produce different outcomes as the investigation of the phenomenon continues.

Meanwhile, as the University of Warwick researchers note, the transit of NGTS-4b is the shallowest ever detected from the ground, giving us the promise of further such discoveries. From the paper:

The discovery of NGTS-4b is a breakthrough for ground-based photometry, the 0.13 ± 0.02 per cent transit being the shallowest ever detected from a wide-field ground-based photometric survey. It allows us to begin to probe the Neptunian desert and find rare exoplanets that reside in this region of parameter space. In the near future, such key systems will allow us to place constraints on planet formation and evolution models and allow us to better understand the observed distribution of planets. Together with future planet detections by NGTS and TESS we will get a much clearer view on where the borders of the Neptunian desert are and how they depend on stellar parameters.

The scientists offer two possibilities for the survival of this planet in the Neptunian desert, and in particular for the persistence of its atmosphere in these hellish conditions. NGTS-4b may have an unusually high core mass, or it may have migrated in to its current close orbit, probably within the last one million years, so that its atmosphere would still be evaporating. The question would then be whether the ‘desert’ is elsewhere marked by a mechanism stopping such migration.