We should be glad to run into the unexpected when doing research, because things we hadn’t foreseen often point to new understanding. That’s certainly the case with infant planetary systems as observed through the circumstellar disks of gas and dust surrounding young stars. ALMA (the Atacama Large Millimeter/submillimeter Array) has been central to the study of such targets. An array of 66 radio telescopes in Chile’s Atacama Desert, the facility works at millimeter and submillimeter wavelengths to provide detailed imaging of emerging systems.

Because it has been revealing a variety of small-scale structures within circumstellar disks, ALMA is giving us insights into planet formation as we observe gaps, rings and spiral arms and their interactions with young planets. This is where the unexpected comes in. For researchers looking at a 5 million year old star called HD 163296 are seeing an unusual amount of dust, more than 300 times the mass of the Earth, despite the detection of at least three proposed planets whose masses range between that of Jupiter and twice that of Uranus.

HD 163296 is a Herbig Ae/Be star, a pre-main-sequence object still embedded in a gas-dust envelope. The star has about twice the mass of the Sun, with a massive disk accounting for approximately one tenth of the Sun’s mass. The disk is about 500 AU wide, making it perhaps twice the outer boundary of our own Kuiper Belt. It’s noteworthy that the disk remains as abundant as it is given the age of the system and its production of at least three planets. 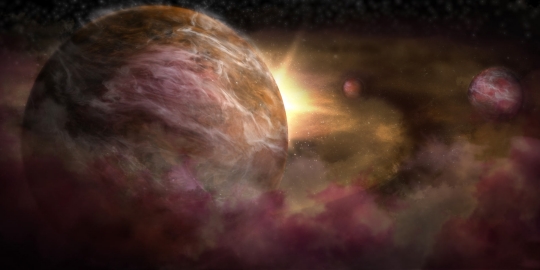 The conventional model of dust distribution in this environment is migration from the outer regions of the disk inward because of coupling and friction with abundant gas, and the assumption has been that this migration would be stopped by the presence of massive planets. The hypothesized result: Dust piling up outside the orbits of the massive planets, while clearing out inside the orbit of the innermost planet as the dust migrates onto the star.

But the new ALMA observations, in tandem with the researchers’ dynamical simulations of this system and their application of a collisional model to test various outcomes, show a different result. The orbital regions inside the first planet, as well as between the first and second planet, have some of the highest concentrations of dust anywhere in the disk. The new work looks at this dust distribution in terms not only of interactions with gas and the new planets but also with what must be a large population of planetesimals, small objects that provide the building blocks of planet formation.

Diego Turrini is lead author of the study and a researcher at the Institute for Space Astrophysics and Planetary Science (IAPS) of the Italian National Institute of Astrophysics (INAF):

“From the study of the Solar System we know that mature circumstellar disks like HD 163296 are not composed only by gas and dust, but also contain an invisible population of small planetary objects similar to our asteroids and comets. We also know that the appearance of giant planets affects these planetesimals by causing in their orbital evolution a brief but intense spike of dynamical excitation that, while short from the point of view of the long life of a planetary system, can have a duration comparable to the life of circumstellar disks.” 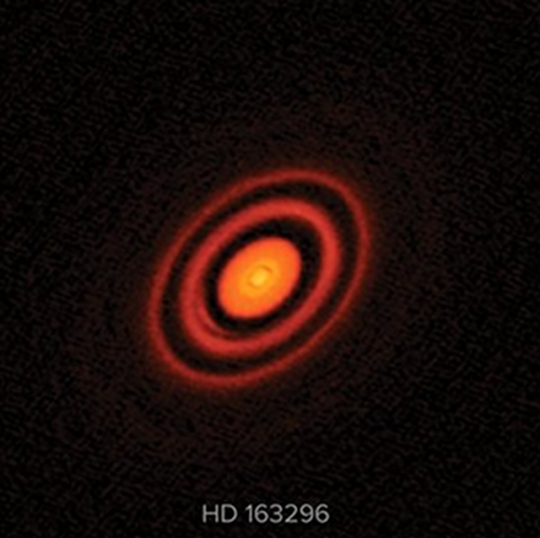 Thus the dynamical simulations calculated to show these interactions and test their limits. What emerges is a regime of planetesimal collisions that remains relatively calm until the giant planets reach their ultimate masses. As the planets grow, more and more planetesimals are driven into eccentric, inclined orbits. At this point, planetesimal collisions become intense. We now have an explanation for the renewed dust in the system, and an orbital distribution of that dust markedly different from before, one where dust accumulates in the inner orbital region of the first planet and also forms a ring between the first and second planets.

These findings jibe with the ALMA observations, linking simulations to a living system. Thus Danai Polychroni, co-author of the study and at the time professor at the Universidad de Atacama and adjunct researcher at INAF-IAPS:

“The fast rate at which ALMA is providing new and more detailed data on HD 163296 allowed us to expand our study beyond its original scope. We noticed that many planetesimals are excited to supersonic velocities with respect to the surrounding gas of the disk and can create shocks waves that can heat both planetesimals and gas. While we could not yet model this process in detail, recent observations reported the unexpected presence of CO gas in regions characterized by temperatures where it should be frozen solid and of possible anomalies in the thermal structure of the disk. Both findings can in principle be explained thanks to the presence of these supersonic planetesimals and the shock waves they create.” 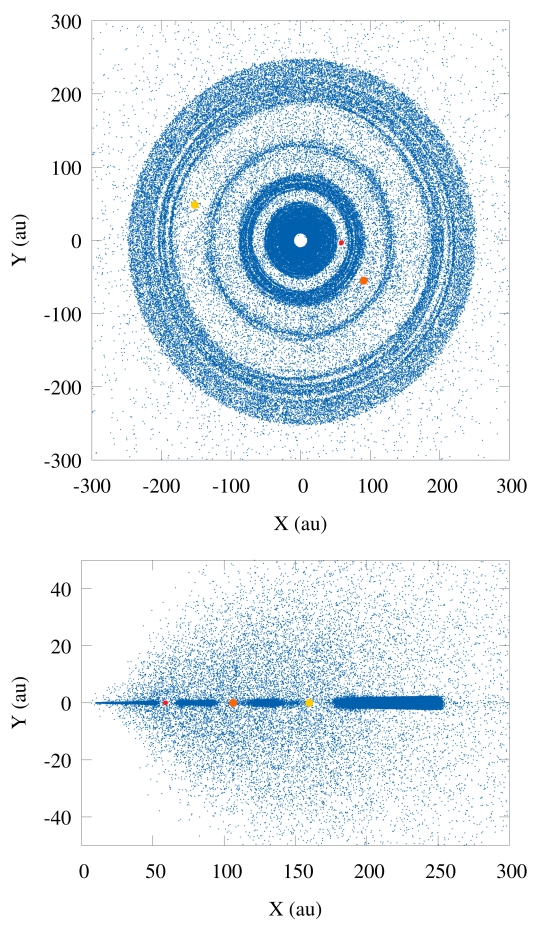 Image: The disk of icy planetesimals hidden in HD 163296’s circumstellar disk seen from above and the side. The young giant planets rapidly create a large population of exocomets acting as high-speed projectiles for the other bodies. Credit: D. Turrini (INAF-IAPS).

We’ve learned, then, that the formation of planets in a circumstellar disk can produce dynamical excitation leading to a resurgence in the ratio of dust to gas that halts the decay of the dust by creating second-generation dust grains through high-velocity collisions. This is useful stuff, for we’re observing more and more possible planets emerging in disks in which planetesimals should be widespread. The disk around HD 163296 may be showing us a stage of planet and system evolution that is common, and one we can now look for in a range of young systems.

The collisional production of second–generation dust in circumstellar disks hosting giant planets …likely represents a common evolutionary phase marking the transition from a circumstellar disk dominated by primordial dust to a debris disk dominated by second generation dust. Whether the amount of collisionally produced dust is high enough to produce observable signatures, like our results suggest being the case for HD 163296’s disk…depends on the characteristics of each specific system, first of all the masses of the giant planets and of the planetesimal disk.