The Moon’s farside used to be a convenient setting for wondrous things. After all, no one had ever seen it, setting the imagination free to insert everything from paradisaical getaways (think Shangri-La in space) to secret technologies or alien civilizations. The Soviet Luna 3 image of 1959 took the bloom off that particular rose, but we also learned through this and subsequent missions that farside really does have its differences from the familiar face we see. More craters, for one thing, and fewer of the dark plains we call maria, or ‘seas.’

We can throw in measurements made by the GRAIL mission (the Gravity Recovery and Interior Laboratory) in 2012. GRAIL was a NASA Discovery-class mission that performed gravitational field mapping of the Moon as a way of examining its internal structure, a set of two probes that worked by analyzing measured changes in distance between the two craft as small as one micron. We wound up with a map of our satellite’s gravitational field that led to deeper understanding of its crust, its thermal evolution and its subsurface structure.

Here again we find variation between farside and what we see from Earth. The Moon’s crust is thicker and contains an additional layer on farside. In fact, the farside crust is on the order of 20 kilometers thicker than nearside, and GRAIL’s remote sensing data tell us that this extra crustal material is composed of silicate minerals, magmas, and rocks which are relatively high in the heavier elements. A collision between a dwarf planet and the Moon that occurred after the Moon had already formed a solid crust is now emerging as one explanation for these differences. 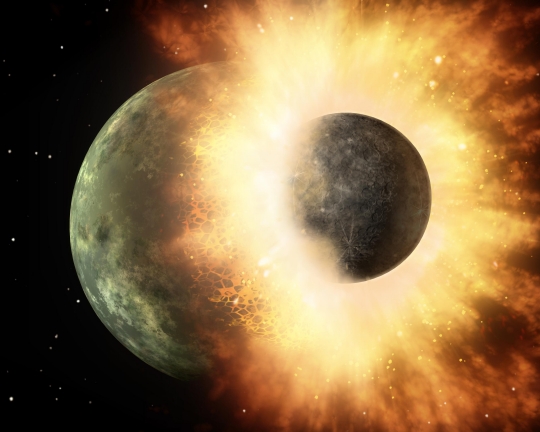 Image: Artist’s depiction of a collision between two planetary bodies. New research suggests the stark difference between the Moon’s heavily-cratered farside and the lower-lying open basins of the nearside were caused by a wayward dwarf planet colliding with the Moon in the early history of the solar system. Credit: NASA/JPL-Caltech.

The research presenting the theory is being led by Meng Hua Zhu of the Space Science Institute at Macau University of Science and Technology. Zhu and colleagues are using GRAIL data as fodder for computer simulations that work through impact scenarios for the early Moon, some 360 of them, to see whether they can reproduce the crustal variation we see today.

The work has produced a model that fits the bill, involving the impact of an object a bit smaller than Ceres (780 kilometers in diameter) striking the Moon’s nearside at 22,500 kilometers per hour. A second fit to the data is a smaller (720 kilometer) object hitting at 24,500 kilometers per hour. In both cases, material blown off the surface would fall back to bury the farside crust in kilometers of debris, which fits the additional crust layer found by the GRAIL mission.

Wouldn’t we see evidence on the nearside of such a titanic collision? Depending on conditions in the early Moon, the telltale signs may be hard to tease out, but the authors believe their model can explain the farside highlands and the nearside lowlands, noting such nearside features as “a large area of low-Ca pyroxene on the nearside observed by Kaguya mission that was explained to be formed via impact through melting a mixture of crust and mantle materials.” Let me quote more from the paper on this, talking about the formation of a ‘mega basin’ covering most of nearside:

…the mega basin structure may not be the same to the surface expression of a typical basin formed later. It is likely that the morphologies of mega basin were heavily modified and possibly even erased due to high internal temperature of the early Moon (Miljkovic et al., 2017), which easily allowed for isostatic relaxation processes (Freed et al., 2014). Therefore, it is highly possible that remnants of a giant impact on the early Moon may be less pronounced and significantly different from the impact basins formed later. To test whether a giant impact on the nearside is a plausible mechanism for the formation of Moon’s asymmetries, we performed a systematic numerical modeling study and quantified the outcome of such impact events. 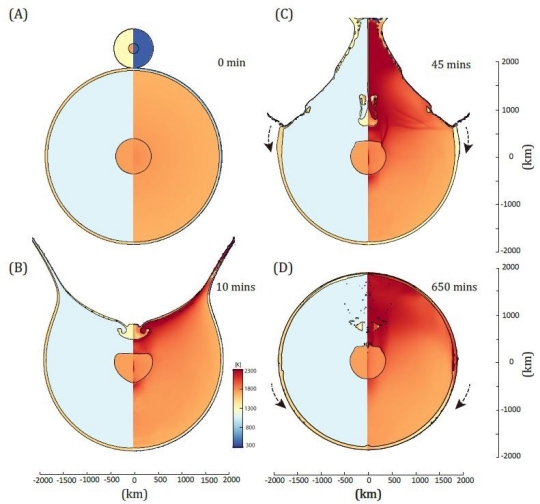 Image: The basin-forming process for an impactor 780 kilometers in diameter (with a 200-kilometer diameter of iron core) with an impact velocity of 22,500 kph (14,000 miles per hour). In each panel, the left halves represent the materials used in the model: gabbroic anorthosite (pale green), dunite (blue), and iron (orange) represent the lunar crust, mantle, and core, respectively. The gabbroic anorthosite (pale yellow) also represents the impactor material. The right halves represent the temperature variation during the impact process. The arrows in (C) and (D) represent the local materials that were moved and formed the new crust together with deposits of material that was blasted from the impact. Credit: JGR: Planets/Zhu et al. 2019/AGU.

Simulating the impact scenarios produces variation in post-impact ejecta and crustal thickness that can reproduce the Moon’s current crust in the farside highlands. The giant impact also fits data on isotope variation in potassium, phosphorus and tungsten-182 between the surfaces of the Moon and the Earth, with the authors positing that these elements would have been added to the Moon’s constituents after its formation. The paper suggests that the impact of an 800-900 kilometer-sized body with the Moon is not unlikely given that the Moon received roughly half of the number of impacts as Mars, many in the form of planetesimals from the early system. 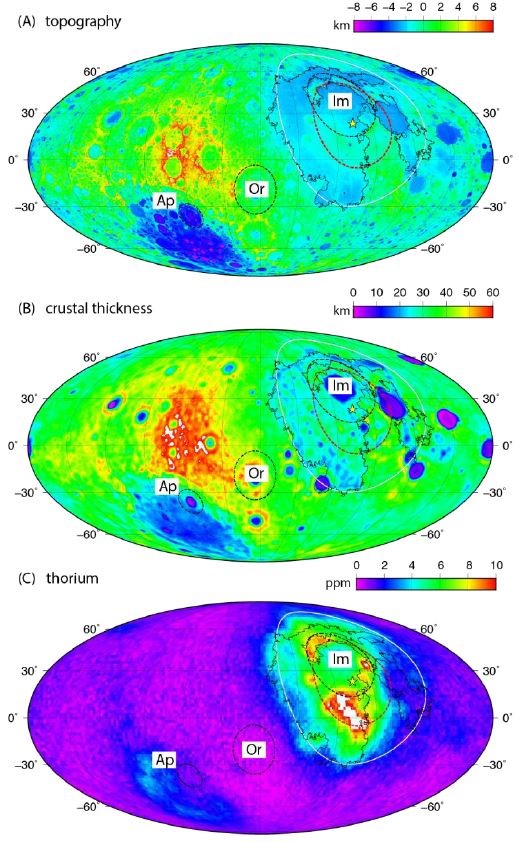 Image: The topographic (A), crustal thickness (B), and thorium distribution of the Moon show a dramatic difference between the nearside and farside. The star on the nearside represents the center of the proposed impact basin. The black dashed lines represent the boundary of Imbrium (Im), Orientale (Or), and Apollo (Ap) basin, respectively. Credit: JGR: Planets/Zhu et al. 2019/AGU.

My own interest in this paper is not so much the Moon itself as the fact that our abundant data on our satellite may help us understand the kind of asymmetries between hemispheres that can occur on large objects as the period of planet formation is drawing to its close. All that is part of learning about the origins of our own Solar System as well as conditions in the young systems we are now beginning to measure in circumstellar disks like the one at HD 163296 that I looked at on Friday (see HD 163296: Emerging Insights into Circumstellar Disks).

The paper is Zhu et al., “Are the Moon’s nearside‐farside asymmetries the result of a giant impact?” Journal of Geophysicl Research: Planets 20 May 2019 (abstract).