We have priceless data on Europa from the Voyager and Galileo missions, but we’re updating earlier interpretations thanks to new work with both the Hubble Space Telescope and the Keck Observatory on Mauna Kea (Hawaii). Thus the discovery that the yellow color visible on parts of Europa’s surface in visible light is most likely sodium chloride (NaCl), familiar as table salt and the principal component of sea salt. That’s an interesting result, given that it suggests a Europan ocean chemically more similar to Earth’s than we had previously assumed.

The re-thinking of the spacecraft data stems from the fact that Galileo was equipped with the Near-Infrared Mapping Spectrometer instrument, useful for analyzing the surface of a planetary body. What Galileo lacked, however, was a visible spectrometer to complement its near-infrared device. The problem: Chlorides are not apparent in the near-infrared. While Galileo had found water ice, it identified a substance believed to be magnesium sulfate salts on the surface.

But spectral data from the Keck instrument showed none of the expected sulfate absorptions. Caltech graduate student Samantha Trumbo is lead author of the paper on this work:

“No one has taken visible-wavelength spectra of Europa before that had this sort of spatial and spectral resolution. The Galileo spacecraft didn’t have a visible spectrometer. It just had a near-infrared spectrometer, and in the near-infrared, chlorides are featureless.”

The researchers used spectra obtained with the Hubble instrument to detect a 450-nm absorption indicating irradiated sodium chloride on the surface. Moreover, this feature correlates with the interesting ‘chaos’ terrain that seems to show interactions with the ocean below, making it appear that there is an interior source for the sodium chloride, as discussed in the paper’s conclusion:

As chaos terrain is geologically young, extensively disrupted, and potentially indicative of locations of subsurface upwelling or melt-through…, and as the leading hemisphere chaos regions are shielded from the sulfur implantation of the trailing hemisphere, the composition of these regions may best represent that of Europa’s endogenous material. However, their spectra are categorically smooth at higher spectral resolution, lacking any identifiable infrared spectral features other than those of water ice. Nevertheless, the unique geology and 1.5- to 4-μm spectra of leading hemisphere chaos terrain suggest a salty composition. Chloride salts provide a potential explanation…

At the Jet Propulsion Laboratory, co-author Kevin Hand put ocean salts to the test under conditions of radiation similar to Europa’s, finding that sodium chloride produced color changes under irradiation that could be identified through analysis of the visible spectrum. Hand likens the substance to invisible ink — radiation is what makes it apparent to the observer. In the laboratory, it turns a shade of yellow similar to the Europan region known as ‘Tara Regio.’ The 450-nm absorption in the visible spectrum detected by Hubble matches the irradiated salt in the laboratory, firming up the idea that Tara Regio’s color comes from irradiated NaCl. 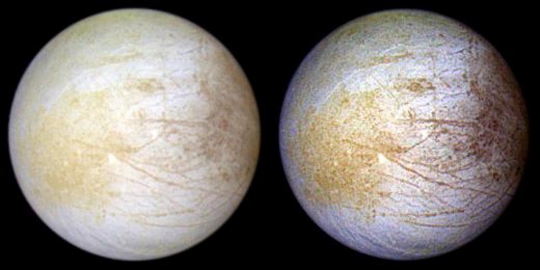 Image: This color composite view combines violet, green, and infrared images of Jupiter’s intriguing moon, Europa, for a view of the moon in natural color (left) and in enhanced color designed to bring out subtle color differences in the surface (right). The bright white and bluish part of Europa’s surface is composed mostly of water ice, with very few non-ice materials. In contrast, the brownish mottled regions on the right side of the image may be covered by hydrated salts and an unknown red component. The yellowish mottled terrain on the left side of the image is caused by some other unknown component. Long, dark lines are fractures in the crust, some of which are more than 3,000 kilometers long. Credit: NASA/JPL/University of Arizona.

We could be looking at sodium chloride as one of the various materials found in the moon’s outer shell, but the prospect that it is derived from the subsurface ocean means that we may have an insight here into the chemistry going on beneath the ice. From the paper: 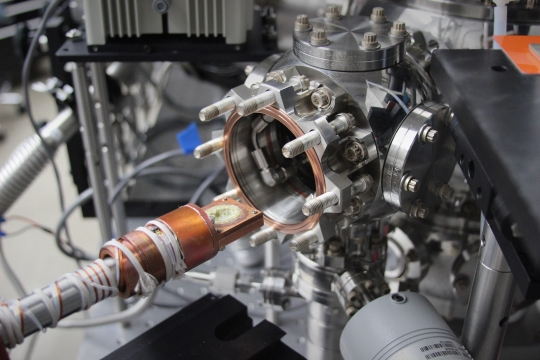 Image: In a laboratory simulating conditions on Jupiter’s moon Europa at NASA’s Jet Propulsion Laboratory in Pasadena, California, plain white table salt (sodium chloride) turned yellow (visible in a small well at the center of this photograph). The color is significant because scientists can now deduce that the yellow color previously observed on portions of the surface of Europa is actually sodium chloride. The JPL lab experiments matched temperature, pressure and electron radiation conditions at Europa’s surface. Credit: NASA/JPL-Caltech.

A more active seafloor than we have assumed? If so, Europan geology becomes still more interesting. A geologically young icy shell with striking areas showing past activity amid evidence of NaCl makes the assumption that these salts derived from the ocean plausible.