We’re getting first results from the Gemini Planet Imager Exoplanet Survey (GPIES), a four-year look at 531 young, nearby stars that relies on the instrument’s capabilities at direct imaging. Data from the first 300 stars have been published in The Astronomical Journal, representing the most sensitive, and certainly the largest direct imaging survey for giant planets yet attempted. The results of the statistical analysis are telling: They suggest that planets slightly more massive than Jupiter in outer orbits around stars the size of the Sun are rare.

The Gemini Planet Imager (GPI), located at the Gemini South Telescope in Chile, can achieve high contrast at small angular separations, making it possible to see exoplanets directly, as opposed to the indirect methods that have dominated the field, such as transits and radial velocity analysis. As successful as the latter have been, they are most effective with planets closer to their stars, whereas an instrument like the GPI can find planets in regions outside the orbit of Jupiter. The GPI can directly image exoplanets a millionth as bright as the host star.

Bruce Macintosh (Stanford University), principal investigator for the GPI, calls this effort “…the most sensitive direct imaging survey for giant planets published to date.” The question it raises is significant: Just how representative is our Solar System in having gas giants like Jupiter and Saturn in outer orbits around a G-class star? We’re only beginning to learn the answer, but surveys like this one are on track to tell us. The answer may have astrobiological consequences, as Franck Marchis (SETI Institute), a co-author of the just published report, explains:

“We suspect that in our solar system Jupiter and Saturn sculpted the final architecture that influences the properties of terrestrial planets such as Mars and Earth, including basic elements for life such as the delivery of water, and the impact rates. A planetary system with only terrestrial planets and no giant planets will probably be very different to ours, and this could have consequences on the possibility for the existence of life elsewhere in our galaxy.” 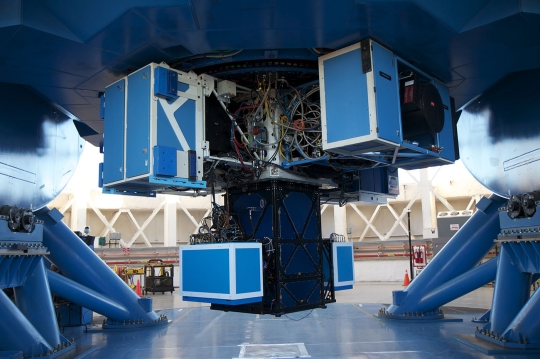 Out of the 300 stars in the thus far released Gemini survey data, 123 are more than one-and-a-half times more massive than the Sun. What the data show is that the hosts of the planets thus far detected are all among the higher mass stars. This despite the fact that given the differential between stellar light and that of a planet, a giant planet orbiting a fainter star more like the Sun is actually easier to see. This relationship of mass to giant planet frequency has been discussed in the literature and is now strengthened by the results of the GPI survey.

The results of the Gemini survey pick up on the theme that other planetary systems tend to be different from our own, despite the assumption that gas giants in outer orbits and rocky worlds on inner orbits would be a fairly standard pattern. Both the GPIES and other exoplanet surveys point to the rarity of giant planets around stars as small as the Sun. Worlds several times more massive than Jupiter and above (the GPIES is not sensitive enough to pick up planets of as low a mass as Jupiter itself) tend to be hosted by stars more massive than the Sun. Our own wide-orbit Jupiter, then, may be a statistical outlier, although that is yet to be determined.

From the paper’s conclusion:

From the first 300 stars observed out of the planned 600-star survey, reaching contrasts of 106 within 1′′ radius, GPIES is one of the largest and deepest direct imaging surveys for exoplanets conducted to date. Our analysis of the data shows that there is a clear stellar mass dependence on planet occurrence rate, with stars >1.5 M☉ [i.e. 1.5 times Solar mass] more likely to host giant planets (5–13 MJup ) at wide separations (semimajor axes 10–100 au) than lower-mass stars.

The paper reports the imaging of six planets and three brown dwarfs, with a sensitivity to planets of several Jupiter masses at orbital distances comparable to those beyond Saturn (at least 12 gas giants had been expected based on earlier models). The only previously unknown planet was 51 Eridani b, which was discovered via GPI as far back as 2014, a gas giant of two-and-a-half Jupiter masses in a Saturn-like orbit around a young star some 97 light years away, and one that had been previously unknown despite attempts to observe the star because no other instrument was able to sufficiently suppress the starlight to make the planet visible. 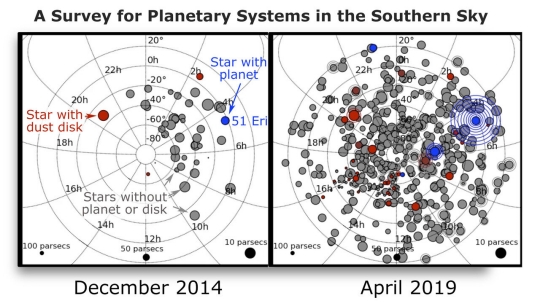 Image: Results of the survey of 531 stars and their exoplanets in the southern sky are plotted to indicate their distance from Earth. Gray dots are stars without exoplanets or a dust disk; red are stars with a dust disk but no planets; blue stars have planets. Dots with rings indicated stars imaged multiple times. Credit: Paul Kalas, UC Berkeley; Dmitry Savransky, Cornell; Robert De Rosa, Stanford.

Another useful find: A brown dwarf labeled HR 2562 B, 30 times more massive than Jupiter in a Uranus-like orbit. This brown dwarf and the other two imaged in the study shed light on planet vs. brown dwarf formation at wide separations from the host star. The question of brown dwarf vs. planet formation is long-standing. Whereas stars have been considered to form through the gravitational collapse of large clouds of gas and dust, planets are thought to have formed largely through core accretion, as small rocky bodies undergo collision and accumulation of mass.

Eugene Chiang (UC-Berkeley) is a co-author of the paper:

So our Solar System evidently doesn’t resemble many other systems that we’ve observed. Gas giants in outer orbits seem to be more common around significantly larger stars. Putting together a catalog of gas giants in the outer systems of other neighboring stars is going to take time — it’s telling that even the GPI can’t detect Jupiter-mass planets in these orbits — but the GPIES is the beginning of that process, and one that will soon publish additional results. Observations in the survey wrapped up in January with an examination of its 531st star. Moving toward their report on the complete dataset, the team is now following up candidate planets at the same time that it begins an upgrade on the Gemini Planet Imager itself.