CARMENES: Two Habitable Zone Planets around a Nearby Red Dwarf

We rarely talk about Teegarden’s Star when mentioning interesting objects near the Solar System, probably because the star was only discovered in 2003 and until now had not been known to host planets. Today we learn, however, that an international team led by the University of Göttingen has found two planets close to Earth mass in what it considers to be the habitable zone around the tiny star. Interestingly, from where the system is located, any local astronomers would be able to see the planets of our Solar System in transit across the face of the Sun, about which more in a moment.

One of the reasons that this comparatively nearby star has been so late to be discovered is its size. We are dealing with an M-class red dwarf, this one in the constellation Aries, and no more than 12.5 light years from us. It took three years of patient radial velocity monitoring to track down planets around a star that is only about 2700 degrees Celsius in temperature, and fully 10 times lighter than the Sun. What we now have are two planet candidates, each with a minimum mass 1.1 times that of Earth, with orbital periods of 4.91 and 11.4 days respectively.

These are, according to the paper, “…the first Earth-mass planets around an ultra-cool dwarf for which the masses have been determined using radial velocities.”

Because no transits have been detected, the scientists have no information on planetary radii, and therefore estimated them based on various possible compositions, from rocky to gaseous mini-Neptune, finding that the resulting radii differ by a factor of about three. The other stellar and planetary parameters were plugged into the Earth Similarity Index (ESI), which compares key parameters to those of Earth. If these worlds are not mini-Neptunes, we get this (from the paper):

Except for the case of a mini-Neptune composition, the two planets have a high ESI. For a potentially rocky composition, the ESI value is 0.94 and 0.8 for planets b and c, respectively. This makes Teegarden’s Star b the planet with currently the highest ESI value. However, the ESI is only an estimate, and different weighting of the parameters may lead to changing ESIs. This ESI definition, for example, does not take into account the stellar spectral energy distribution and the resulting planetary atmospheric composition, which very likely have an effect on habitability.

So we push at the boundaries of what we still don’t know. Lead author Matthias Zechmeister (University of Göttingen) noted the resemblance between these two worlds and the inner planets of our Solar System, saying “They are only slightly heavier than Earth and are located in the so-called habitable zone, where water can be present in liquid form.” I asked Dr. Zechmeister to amplify on the habitability zone finding, to which he replied:

You may have noted that PHL (http://phl.upr.edu/press-releases/pr_draft_tee4321) ranks Teegarden b now as the exoplanet most similar to Earth. The conditions are good for liquid water on the surface, given a similar insolation and mass as Earth’s. Still, we cannot be sure to 100%. We have measured “only” the mass (which is a minimum mass, but true masses are statistically only ~16% higher). So we do not know the true chemical composition, though a rocky composition is probable (see Fig. 12 in the paper for other compositions).

Dr. Zechmeister also made note of the fact that Teegarden’s Star is about 8 billion years old, roughly twice the age of the Sun, allowing plenty of time for interesting things to develop if life ever took hold there. And he raised a caution re the habitability issue, noting that the diminutive star is what he refers to as ‘an extreme host,’ a type of star about which we still have a great deal to learn.

So small is Teegarden’s Star that it is not far above the upper size limit for brown dwarfs, often considered to be somewhere between 60 and 90 Jupiter masses, and at magnitude 15, it demands a large telescope to see it at all. In fact, it was actually discovered in 2003 via stored data in the Near-Earth Asteroid Tracking (NEAT) program, and had been logged in our data earlier, turning up on photographic plates from the Palomar Sky Survey taken in 1951. 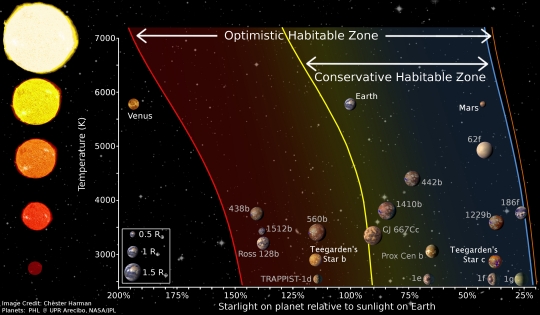 Now ponder this: Radial velocity detections have produced more than 800 exoplanets, but few have been found around old, cool M-dwarfs. In fact, we have only two other planet hosts with effective temperatures cooler than 3,000 K, and one of these is Proxima Centauri, while the other is TRAPPIST-1, around which fully seven transiting planets are known to exist. The authors of the paper on the Teegarden’s Star work consider the lack of planet detections around very late-type stars the result of observational bias owing to the faintness of the objects at visible wavelengths.

Both planets have a minimum mass close to one Earth mass, and given a rocky, partially iron, or water composition, they are expected to have Earth-like radii. Additionally, they are close to or within the conservative HZ, or in other words, they are potentially habitable. Our age estimate of 8 Gyr implies that these planets are about twice as old as the solar system. Interestingly, our solar system currently is within the transit zone as seen from Teegarden’s Star. For any potential Teegardians, the Earth will be observable as a transiting planet from 2044 until 2496.

A later note from co-author Guillem Anglada-Escudé, the discoverer of Proxima Centauri b, unpacks this further. The transit that would be visible from this system in 2044 would have occurred in our Solar System in 2032, factoring in the 12 year light travel time. There have been SETI discussions regarding the possibility of conducting communication attempts of stars whose planets would see our own world in transit around the Sun, so any such attempt would need to take place in 2032 or later, with the earliest potential response expected around 2056. 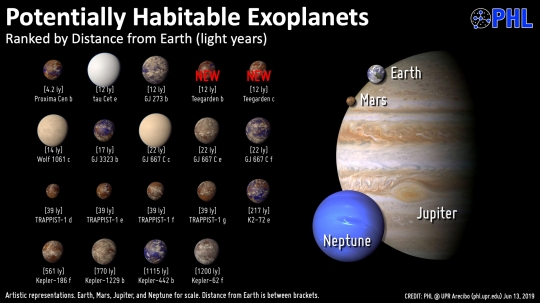 The team behind this work used data from CARMENES (Calar Alto high-Resolution search for M dwarfs with Exoearths with Near-infrared and optical Échelle Spectrographs), an effort using two separate spectrographs located at the 3.5m telescope at the Calar Alto Observatory in Almeria, Spain. The goal of the project, conducted by a consortium of German and Spanish institutions, is to carry out a survey of approximately 300 late-type main-sequence stars with the goal of detecting low-mass planets in their habitable zones.

We have not, in other words, heard the last from CARMENES.