Cassini’s productivity at Saturn continues to provide fodder for scientific papers and encouragement for the builders of complex missions, who have seen enough data gathered by this one to guarantee continuing insights into the ringed planet for years to come. The June 14 issue of Science offers up four papers (citations below) that show results from four of the spacecraft’s instruments, including startling views of the main rings.

The data examined in the Science papers were gathered during Cassini’s ring-grazing orbits from December, 2016 to April of 2017 as well as during the ‘Grand Finale’ between April and September of 2017, when Cassini flew closer than ever before to the giant planet’s cloud tops. Consider the image below, showing an infrared view as captured by the spacecraft’s Visible and Infrared Mapping Spectrometer (VIMS), with (at the left) the natural color view taken as a composite by Cassini’s Imaging Science Subsystem.

Imaging the rings in visible and near-infrared wavelengths, VIMS surprised scientists by finding weak water ice bands in the outer parts of the A ring, a seeming contradiction given the highly reflective nature of this area, which has been taken to indicate less contaminated ice and stronger water ice bands. While water ice is dominant in the rings, the spectral map shows no ammonia or methane ice, nor does it see organic compounds. This is an oddity given that organics have been found flowing out of the D ring into Saturn’s atmosphere.

“If organics were there in large amounts — at least in the main A, B and C rings — we’d see them,” says Phil Nicholson, Cassini VIMS scientist of Cornell University in Ithaca, New York. “I’m not convinced yet that they are a major component of the main rings.” 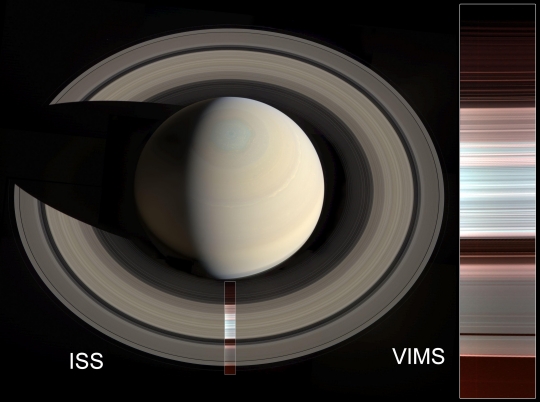 Image: The false-color image at right shows spectral mapping of Saturn’s A, B and C rings, captured by Cassini’s Visible and Infrared Mapping Spectrometer (VIMS). It displays an infrared view of the rings, rather than an image in visible light. The blue-green areas are the regions with the purest water ice and/or largest grain size (primarily the A and B rings), while the reddish color indicates increasing amounts of non-icy material and/or smaller grain sizes (primarily in the C ring and Cassini Division). At left, the same image is overlaid on a natural-color mosaic of Saturn taken by Cassini’s Imaging Science Subsystem. Credit: NASA/JPL-Caltech/University of Arizona/CNRS/LPG-Nantes. Saturn image credit: NASA/JPL-Caltech/Space Science Institute/G. Ugarkovic.

The rings, now believed to have formed much later than the planet itself, continue to deliver complexities that will feed into future models of ring evolution. The last phase of Cassini’s mission is, in the words of project scientist Linda Spilker (JPL), author of one of the papers in Science, “like turning the power up one more notch on what we could see in the rings,” a higher resolution that even as it answers some questions raises still more.

At the outer edge of the main rings, for example, impact-generated streaks appear in the F ring that are of approximately equal length and similar orientation, suggesting a string of impactors striking at the same time. The implication: The F ring, at least, is shaped by materials already orbiting Saturn rather than by materials the planet encounters in its orbit of the Sun. Small moons embedded in the rings can be considered in that sense to be sculpting them, according to Cassini scientist Matt Tiscareno (SETI Institute). Here we might see useful analogs in young exoplanet systems, where stellar systems form out of circumstellar disks that are in turn shaped by the emerging planets within them, processes out of which our own Solar System formed.

We also see how remarkably ring textures can differ even in segments close to each other, as seen in the image below. Teasing out the interactions that shaped the patterns found here will take us deeply into chemistry and temperature changes as mapped by Cassini. 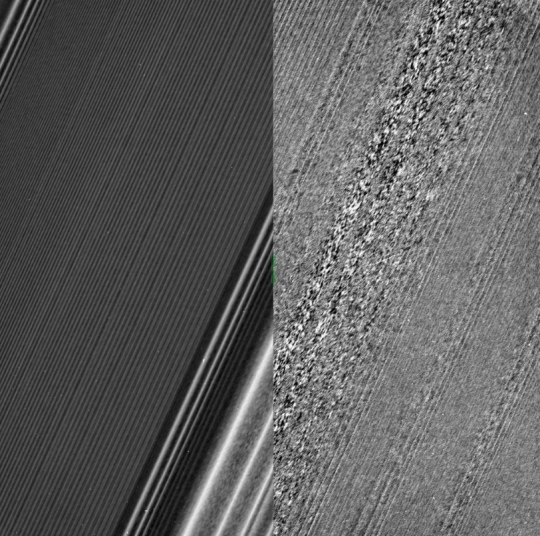 Image: New images of Saturn’s rings show how textures differ even in close proximity of one another. The image on the right has been filtered so that the newly visible straw-like textures and clumps are more visible. Credit: NASA/JPL-Caltech/Space Science Institute.

Now have a look at Daphnis, one of the embedded moons, which is here shown creating three waves in the outer edge of the Keeler Gap, at the outer edge of the A ring. The spacecraft was at a shallow 15 degree angle above the rings when the image was taken. The images here were taken in visible light using Cassini’s narrow-angle camera at a distance of about 28,000 kilometers from Daphnis and at a Sun-Daphnis-spacecraft phase angle of 71 degrees. 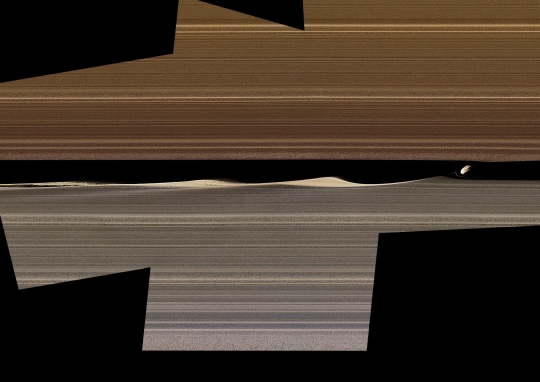 Image: This enhanced-color image mosaic shows Daphnis, one of the moons embedded in Saturn’s rings, in the Keeler Gap on the sunlit side of the rings. Daphnis is seen kicking up three waves in the gap’s outer edge. Three wave crests of diminishing sizes trail the moon. In each successive crest, the shape of the wave changes as the ring particles within the crest interact and collide with each other. A thin strand of ring material to the lower left of Daphnis is newly visible in this image, and there are intricate features that also hadn’t been previously observed in the third wave crest downstream. Credit: NASA/JPL-Caltech/Space Science Institute / Tilmann Denk (Freie Universität, Berlin).

And finally, this image showing the third wave crest, which displays multiple strands of ring material, an indication of the effects of Daphnis on the ring. Here we are again in visible light, now at a distance of 23,000 kilometers and at a phase angle (Sun-Daphnis-spacecraft) of 94 degrees, with an image scale of 160 meters per pixel. 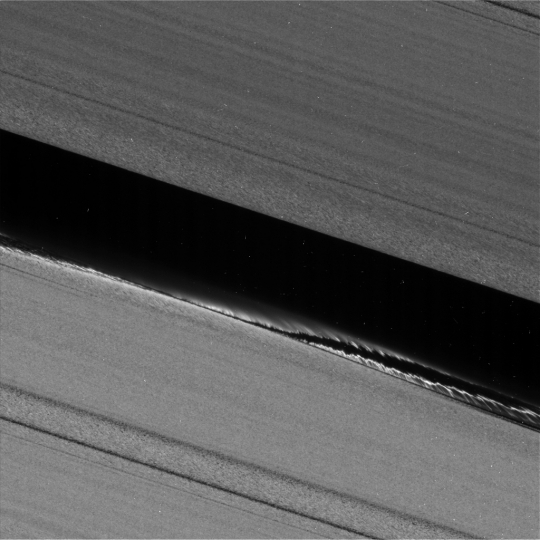 Image: A closeup of the third wave crest (toward the far left in the color image) focusing on detail scientists hadn’t seen before, with multiple strands of ring material visible. The image shows how the ring material behaves after losing the structure Daphnis triggered and goes back to interacting with itself. The ribbon of material that appears to be protruding into the gap in the right-hand portion of the image is probably actually soaring above the ring plane. Toward the left-hand part of the image, that same ribbon of material dives below the ring plane and becomes obscured by the main part of the rings, which is why it disappears from view. Credit: NASA/JPL-Caltech/Space Science Institute.

I had never thought of Saturn as providing a kind of astrophysical laboratory that could illuminate processes at work in the early Solar System, but this is what the four papers in Science suggest, for here we see the kinds of interactions that take place in disk structures that contain larger accreted objects. The Cassini imagery and data will always symbolize the era of early Solar System reconnaissance on which we are embarked. Imagine what we might do with a next-generation craft, a Cassini follow-up around Uranus or Neptune.