Into the Uranian Rings

Both DSAC (the Deep Space Atomic Clock) and LightSail 2 are on the line when a SpaceX Falcon Heavy launches on Monday evening. Both missions portend interesting developments in our push to deep space, with DSAC testing our ability to extend navigational autonomy, and LightSail 2 a solar sail that will use the power of solar photons to raise its orbit. You can follow the launch (now scheduled for 2330 Eastern (0330 UTC) on NASA Live. Also lifting off with the Falcon Heavy from the Kennedy Space Center will be almost two dozen other satellites, a nod both to the Falcon Heavy’s capabilities but also to increasing spacecraft miniaturization.

And speaking of interesting missions, here’s something good about one whose anniversary we’re about to celebrate. My friend Al Jackson, who served as astronaut trainer on the Lunar Module Simulator in the Apollo days, passed along a link to the Air-to-Ground Loop and the Flight Director’s Loop from Apollo 11. Give yourself 20 minutes or so and don’t miss this:

On to today’s topic.

Return to the Planet of Doubt

I first mentioned Stanley Weinbaum’s story “The Planet of Doubt” back in 2011, certainly the most memorable monicker Uranus has ever received, even if Weinbaum’s Uranus doesn’t hold a candle to later imaginings from Geoff Landis and, in particular, Gerald Nordley (everyone should read Landis’ “Into the Blue Abyss” and Nordley’s brilliant “Into the Miranda Rift.”). And then there is Kim Stanley Robinson’s The Memory of Whiteness (1985), a vivid reading memory from a trip with my oldest son to Maine, where I couldn’t put it down. This is how it begins:

Dear Reader, two whitsuns orbit the planet Uranus; one is called Puck, the other, Bottom. They burn just above the swirling clouds of that giant planet, and with the help of the planet’s soft green light they illuminate all that dark corner of the solar system. Basking in the green glow of this trio are a host of worlds — little worlds, to be sure, worlds no bigger (and many smaller) than the asteroid Vesta — but worlds, nevertheless, each of them encased in a clear sphere of air like little villages in glass paperweights, and each of them a culture and society unto itself. These worlds orbit in ellipses just outside the narrow white bands of Uranus’s rings; you might say that the band of worlds forms a new ring in the planet’s old girdle: the first dozen made of ice chunks held in smooth planes, the newest made of an irregular string of soap bubbles, filled with life. And what holds all these various worlds together, what is their lingua franca? Music.

That’s quite a start, and it certainly had me hooked that summer up near Blue Hill. The Memory of Whiteness is one of the ultra-rare pieces of fiction in which the Uranian rings appear, which is why I quote it, because we’re learning more about the rings through the work of a team of scientists from UC-Berkeley and the University of Leicester in the UK, who have released updated views of the system. Here we get a glimpse of the thermal glow of these dim structures, a tough catch in visible light as well as near-infrared for any but the largest telescopes. The instruments in play are the Atacama Large Millimeter/submillimeter Array (ALMA) as well as the Very Large Telescope (VLT).

Results from both sets of observations appeared this week in The Astronomical Journal; note that the VLT work was done in 2017 using the VISIR instrument, a spectrometer working at infrared wavelengths that is now, in upgraded form, in use by the NEAR project in the search for planets around Centauri A and B. This is the first time that the temperature of these rings has been measured, at 77 Kelvin, which is the boiling temperature of liquid nitrogen. Prior images have all shown the rings in reflected sunlight. The new work offers millimeter (ALMA) and mid-infrared imaging (VLT/VISIR) to produce what you see below. 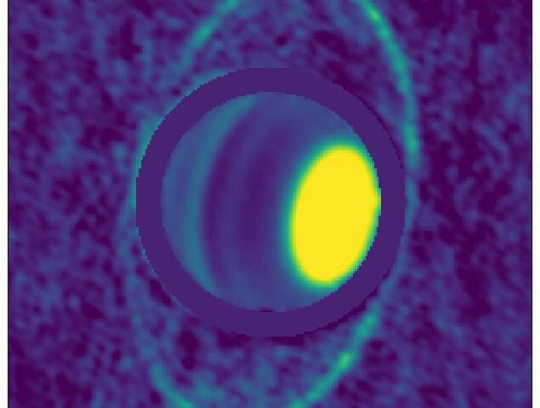 Image: Composite image of Uranus’s atmosphere and rings at radio wavelengths, taken with the ALMA array in December 2017. The image shows thermal emission, or heat, from the rings of Uranus for the first time, enabling scientists to determine their temperature: a frigid 77 Kelvin (-320 F). Dark bands in Uranus’s atmosphere at these wavelengths show the presence of molecules that absorb radio waves, in particular hydrogen sulfide gas. Bright regions like the north polar spot (yellow spot at right, because Uranus is tipped on its side) contain very few of these molecules. Credit: UC Berkeley. Image by Edward Molter and Imke de Pater.

We also learn a good deal about the composition of the rings, which differs from what we see elsewhere in the Solar system. Imke de Pater (UC-Berkeley), a co-author of the paper on this work, points to the range of particle sizes from meters down to micron-size in Saturn’s innermost D ring up to tens of meters in the main rings. At Uranus, the smaller size particles are missing in the epsilon ring, the brightest and densest of the Uranian rings, which appears to be made up of particles no smaller than golf balls. A dust component does show up between the main rings.

“We already know that the epsilon ring is a bit weird, because we don’t see the smaller stuff. Something has been sweeping the smaller stuff out, or it’s all glomming together. We just don’t know. This is a step toward understanding their composition and whether all of the rings came from the same source material, or are different for each ring.”

These rings are also dark as charcoal, as well as being quite narrow compared to the rings of Saturn. The epsilon ring is the widest, varying from 20 to 100 kilometers in width, while Saturn’s rings can range from hundreds to tens of thousands of kilometers wide. 13 rings have thus far been found around Uranus, which Voyager flew past in 1986, likewise finding a scarcity of dust-sized particles. This sets Uranus apart from the other ice giant, for Neptune’s rings are largely dust, while gas giant Jupiter’s are mostly made up of particles of micron size.

Image: The Uranian ring system captured at different wavelengths by the ALMA and VLT telescopes. The planet itself is masked since it is very bright compared to the rings. Credit: Edward Molter, Imke de Pater, Michael Roman and Leigh Fletcher, 2019.

While the observations here are not sensitive to dust down to micron-size, the results are consistent with studies of the rings in optical and near-infrared reflected light that indicate no dust of this size is present. Here’s the paper’s conclusion:

The consensus between our millimeter and mid-infrared observations and literature visible-wavelength observations shows that the properties of the main rings remain the same at any observed wavelength despite the fact that our observations are not sensitive to micron-sized dust. This finding confirms the hypothesis, proposed based on radio occultation results (Gresh et al. 1989), that the main rings are composed of centimeter-sized or larger particles. A simple thermal model similar to the NEATM model for asteroids was applied to determine that the ring particles display roughly black-body behavior at millimeter/mid-infrared wavelengths at a temperature of 77 ± 2 K, suggesting the particles’ thermal inertia may be small enough and rotation rate slow enough, to induce longitudinal temperature differences between their dayside and nightside.

The image below, taken from earlier work, offers a near-infrared view of the rings that shows some of the interleaved dust between them, with the epsilon ring at the bottom. 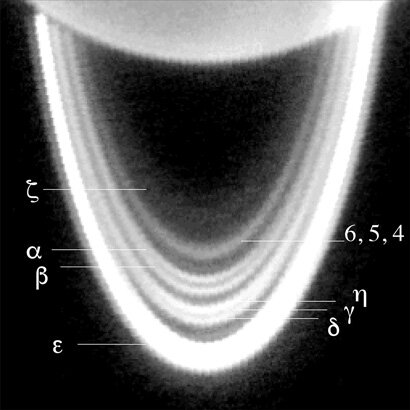 Image: Near-infrared image of the Uranian ring system taken with the adaptive optics system on the 10-meter Keck telescope in Hawaii in July 2004. The image shows reflected sunlight. In between the main rings, which are composed of centimeter-sized or larger particles, sheets of dust can be seen. The epsilon ring seen in new thermal images is at the bottom. Credit: UC Berkeley image by Imke de Pater, Seran Gibbard and Heidi Hammel, 2006.

The paper is Molter et al., “Thermal Emission from the Uranian Ring System,” accepted at The Astrophysical Journal. Preprint.