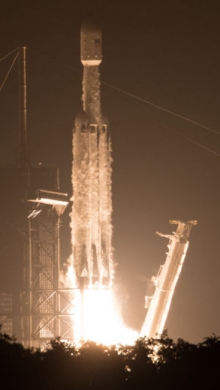 Night launches are spectacular, that’s for sure, especially with a rocket as muscular as the SpaceX Falcon Heavy. Less spectacular, at least at this point in my life, is staying up until 0230, but delays are part of the rocket business, and what counts is a launch successful in everything but the return of the center booster (both side boosters landed upright at Cape Canaveral). Prox-1, the carrier vehicle for The Planetary Society’s LightSail 2, was released at 720 kilometers, with deployment of the sail itself scheduled for July 2.

While we wait for LightSail developments and also follow the fortunes of NASA’s Deep Space Atomic Clock, launched as one of 24 satellites deployed by this bird, the 2019 Astrobiology Science Conference in Seattle draws attention this morning with new information about Saturn’s tantalizing moon Titan. I’m still having to adapt to not having Cassini in Saturn space, but without its presence scientists are proceeding with laboratory studies that re-create conditions like those on the surface of Titan. Among their findings: Compounds and minerals not found on Earth, including a ‘co-crystal’ composed of solid acetylene and butane.

I had to look this one up. A co-crystal (often written without the hyphen) is a molecular crystal with multiple components. An evidently authoritative source (G.P. Stahly, writing in a journal called Crystal Growth & Design in 2007), says that co-crystals “consist of two or more components that form a unique crystalline structure having unique properties.” In the case of the work presented by JPL’s Morgan Cable at the Astrobiology Science Conference, both acetylene and butane appear as gases on Earth, but on Titan, they are solid and combine to form crystals.

The mineral Cable’s team identified in the lab may account for a surface feature found in Cassini imagery in the form of orange shadings around the edges of Titan’s seas and lakes. We know that some of these areas show signs of evaporated material left behind as the liquid receded. These bright features show up in data from the spacecraft’s Visual and Infrared Mapping Spectrometer (VIMS) and Synthetic Aperture Radar (SAR) around lakes in the north polar region. The thinking is that organic molecules generated in the atmosphere and deposited on the surface dissolve in liquid methane and ethane and precipitate when it evaporates. 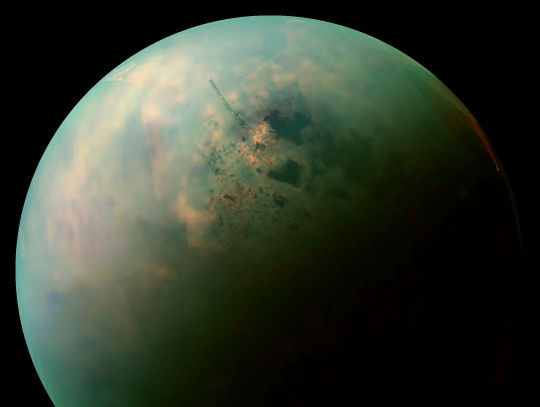 Image: A false-color, near infrared view of Titan’s northern hemisphere collected by NASA’s Cassini spacecraft shows the moon’s seas and lakes. Orange areas near some of them may be deposits of organic evaporite minerals left behind by receding liquid hydrocarbon. Credit: NASA / JPL-Caltech / Space Science Institute.

To investigate, the scientists used a cryostat filled with liquid nitrogen, gradually warming the chamber until the nitrogen turned to gas, and then adding methane and ethane along with other carbon-containing molecules. Benzene crystals emerged from the mix, creating a co-crystal with ethane molecules. The acetylene and butane co-crystal, likely more common on Titan given the moon’s composition, was then discovered. Other undiscovered hydrocarbon crystals may exist, say the researchers, although finding them will require a mission to Titan’s shorelines.

At surface temperatures in the range of 90 K, the authors believe, the acetylene-butane co-crystal “…may be ubiquitous in these regions of Titan’s surface.” Cable and colleagues are interested in chemical gradients that could potentially be exploited by life, as their presentation notes:

The catalytic hydrogenation of acetylene has been proposed as a possible energy-yielding reaction for metabolism (Schulze-Makuch et al. 2005; McKay et al. 2005; Tokano et al. 2009). It is possible that acetylene-based co-crystals might be a mechanism for storing acetylene, in a manner similar to how carbon dioxide is stored in carbonate deposits on Earth, where it might be more readily accessible to a putative microbial community.

What a complex place we’re dealing with, one whose atmosphere undergoes chemical reactions that produce organic molecules that wind up on the surface, where chemical reactions may occur as the landscape is manipulated by frigid winds and rain. A liquid water ocean beneath the surface may exchange materials with the surface over long timeframes. Being discussed at the conference is the question of whether conditions on Titan could produce the chemical complexity and particularly the energy life would demand. We’re a long way from the answer.

The presentation is Cable et al., “The Acetylene-Butane Co-Crystal: A Potentially Abundant Molecular Mineral on Titan,” with abstract here.