We’ve looked at a number of concepts for exploring Titan over the years, from aircraft capable of staying aloft for a year or more to balloons and boats that would float on the moon’s seas. Dragonfly, the work of a team based at Johns Hopkins University’s Applied Physics Laboratory in Laurel, MD, is a rotorcraft with the capability of exploiting Titan’s thick atmosphere to stop, sample, and move on, shaping its investigations along the way as it explores an environment rich in targets.

These are the advantages of a rover, though here we’re in a landscape so exotic that it enables different tools than the ones we use on Mars. And with the success of the Martian rovers in mind, what good news that NASA has chosen Dragonfly as the next mission in its New Frontiers program. We can anticipate launch in 2026 and arrival at Titan in 2034, with a craft that will sample surface organics and examine prebiotic chemistry and potential habitability.

“Titan is such an amazing, complex destination. We don’t know the steps that were taken on Earth to get from chemistry to biology, but we do know that a lot of that prebiotic chemistry is actually happening on Titan today. We are beyond excited for the chance to explore and see what awaits us on this exotic world.”

No more so than all of us who lamented the end of Cassini’s mission and wondered whether the dynamic concepts for Titan exploration being offered would ever see the light of day. But think about how much Cassini itself played into Dragonfly. We have 13 years of data from the Saturn orbiter, which makes target selection a matter of choosing among abundance. The plan is for Dragonfly to land on the moon’s equator, in the dune fields now known as Shangri-La.

Dragonfly can then move on in flights of about 8 kilometers each, sampling the wide-range of Titan’s geography, while heading for an impact crater called Selk, which appears to be rich in complex molecules — carbon united with hydrogen, oxygen and nitrogen. Along the way, the mission takes advantage of Titan’s calm, dense atmosphere (four times denser than Earth’s), along with its low gravity, to travel widely. The plan is for a journey of more than 175 kilometers, twice the distance of all the Mars rovers thus far deployed.

Dragonfly itself has eight rotors, giving it the aspect of a large drone. APL talks about one hop per full Titan day, each of these being 16 Earth days, within the context of a two-year mission. Although Dragonfly in flight is a dazzling prospect, the craft will spend most of its time on the surface conducting science measurements with the help of power from a Multi-Mission Radioisotope Thermoelectric Generator (MMRTG), with recharging occurring at night.

In flight, Dragonfly will provide images of surface geology (imagine the views we are going to see, although bear in mind that during flight, the high gain antenna will be stowed — no live streaming), while scouting for ground sites to study and building up a profile of Titan’s atmosphere. On the surface, the craft will use a mass spectrometer to examine the moon’s chemistry and the production of biologically interesting compounds. A neutron-activated gamma-ray spectrometer will offer readings on surface composition, while meteorology sensors will track atmospheric variation as imaging and seismic sensors probe geologic features. 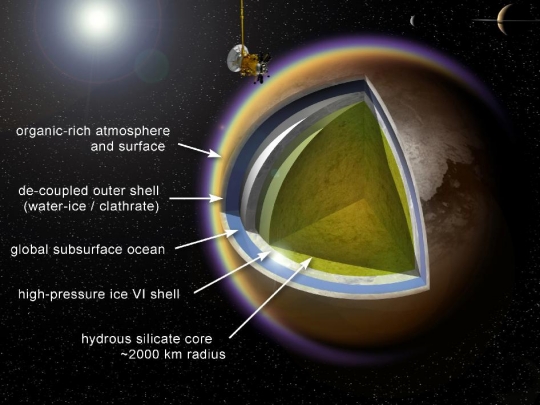 Image: This artist’s concept shows a possible model of Titan’s internal structure that incorporates data from NASA’s Cassini spacecraft. In this model, Titan is fully differentiated, which means the denser core of the moon has separated from its outer parts. This model proposes a core consisting entirely of water-bearing rocks and a subsurface ocean of liquid water. The mantle, in this image, is made of icy layers, one that is a layer of high-pressure ice closer to the core and an outer ice shell on top of the sub-surface ocean. A model of Cassini is shown making a targeted flyby over Titan’s cloudtops, with Saturn and Enceladus appearing at upper right. The model, developed by Dominic Fortes of University College London, England, incorporates data from Cassini’s radio science experiment. Credit: A. D. Fortes/UCL/STFC.

And so we begin preparations for exploring a place of liquid methane seas and the potential for liquid water beneath a surface where water ice stands in for bedrock. We’ll be studying up close an atmosphere composed primarily of nitrogen with about 5 percent methane which, when exposed to sunlight, forms complex organic compounds. All this within a hydrological cycle of methane clouds and flowing liquid methane that fills lakes and seas. Congratulations to Elizabeth ‘Zibi’ Tuttle and the entire team. What prospects await…

Addendum: Paul Voosen’s article on Dragonfly on the Science site adds some details about the equipment aboard:

Dragonfly won’t be equipped with a robotic arm, like the recent Mars rovers. Its exploration will first be guided by an instrument on its belly that will bombard the ground with neutron radiation, using the gamma rays this attack releases to differentiate between basic terrain types, such as ammonia-rich ice or carbon-rich sand dunes. Its two landing skids will also each carry a rotary-percussive drill capable of taking samples and feeding them through a pneumatic tube to a mass spectrometer that can analyze their composition. The sampling system represented a risk for the mission; NASA scientists were concerned Titan’s hydrocarbon-rich atmosphere could clog it, Zurbuchen says. “It’s the oil spill version of an atmosphere.” Over the past 2 years, after extensive testing with “pathological” materials and a redesign, Turtle says, the agency’s fears were allayed.

Voosen also points out that the Dragonfly seismometer could use vibrations induced by Titan’s tidal lock with Saturn to give us some indication of the size of the ocean beneath the crust. Ultimately, the nuclear power source could last for 8 years, meaning extended missions are in the cards.