Unusual Atmosphere of a ‘Sub-Neptune’

We refine our terminology as we go when a field as new as exoplanetology is in play. Take the case of GJ 3470b. At 12.6 Earth masses, is this a ‘sub-Neptune’ or a ‘super Earth’? Neptune itself is 17 Earth masses, so I’d on balance give the nod to ‘sub-Neptune,’ though categories here get confusing. The planet is 0.031 AU out from its star, a red dwarf half the mass of our Sun. Oddly, it has a hydrogen/helium atmosphere in which heavier elements are all but absent.

We know this because scientists have been able to put data from both the Hubble instrument and Spitzer to work on an analysis of the atmosphere of the planet. This is done through a technique we’ve examined before, transmission spectroscopy, in which astronomers study the absorption of the star’s light as the planet passes across its face (a transit as seen from Earth), and then the loss of reflected planetary light as the planet moves behind the star (this is called a secondary eclipse). 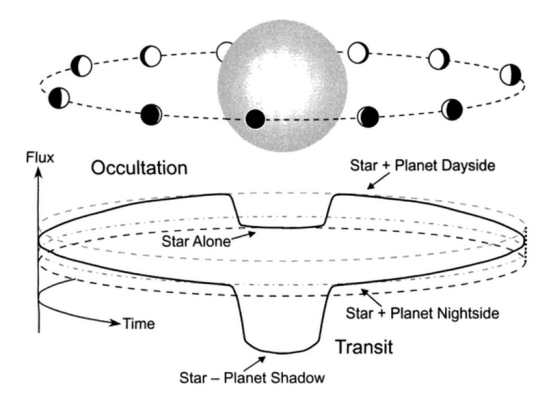 The atmospheric data come from observations of 12 transits and 20 eclipses, giving us a first look at the atmospheric composition of a world like this. GJ 3470b is, to say the least, unusual. Björn Benneke (University of Montreal) is lead author of the paper, now available in Nature Astronomy:

“This is a big discovery from the planet-formation perspective. The planet orbits very close to the star and is far less massive than Jupiter – 318 times Earth’s mass – but has managed to accrete the primordial hydrogen/helium atmosphere that is largely ‘unpolluted’ by heavier elements. We don’t have anything like this in the solar system, and that’s what makes it striking.”

The scientists expected to find heavier elements such as carbon and oxygen, out of which we would detect water vapor and methane. This would point to the Neptune model. But the data threw a curve: What was actually revealed was an atmosphere devoid of heavy elements, to such a degree that Benneke likens it to the hydrogen and helium composition of the Sun. With resemblances to a gas giant atmosphere in being hydrogen-dominated, it is nonetheless one that is depleted in methane.

Here’s how the paper handles the lack of methane, and its bearing on planet formation. One possibility is that there is interior heating that is not being accounted for, but there are others:

Evolution modeling of GJ 3470b indicates that internal heat from formation should have been radiated away within a few Myr, well below the estimated age of the system; however, tidal heating due to forced eccentricity from another unseen planet in the system, similar to the situation with Jupiter’s moon Io could be a possible explanation. The residual non-zero eccentricity of GJ 3470b as independently confirmed by our eclipse observations and radial velocity measurements support this hypothesis. Alternatively, GJ 3470b’s surprising lack of methane could potentially be the results of photochemical depletion due to catalytic destruction of CH4 in deeper atmospheric regions where photolysis of NH3 and H2S release large amounts of atomic hydrogen. The fact that ammonia is also depleted in comparison to expectations based on our chemical-kinetics modeling is consistent with this catalytic-destruction possibility. 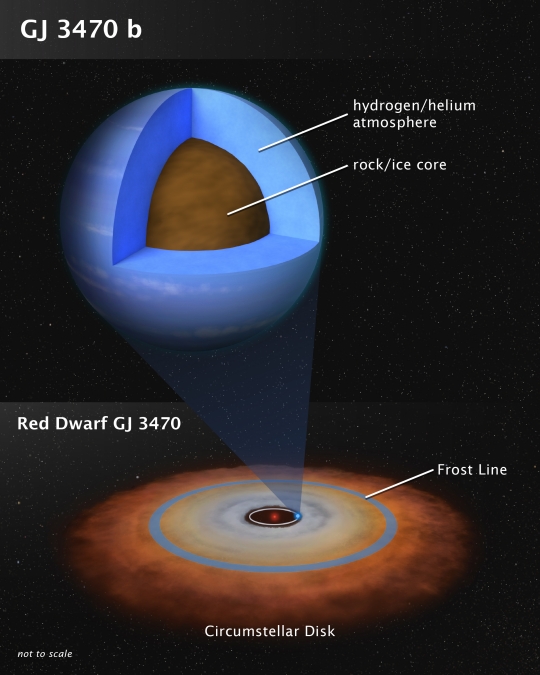 Image: This artist’s illustration shows the theoretical internal structure of the exoplanet GJ 3470b. It is unlike any planet found in the Solar System. Weighing in at 12.6 Earth masses the planet is more massive than Earth but less massive than Neptune. Unlike Neptune, which is 4.5 billion kilometers from the Sun, GJ 3470b may have formed very close to its red dwarf star as a dry, rocky object. It then gravitationally pulled in hydrogen and helium gas from a circumstellar disk to build up a thick atmosphere. The disk dissipated many billions of years ago, and the planet stopped growing. The bottom illustration shows the disk as the system may have looked long ago. Observation by NASA’s Hubble and Spitzer space telescopes have chemically analyzed the composition of GJ 3470b’s very clear and deep atmosphere, yielding clues to the planet’s origin. Many planets of this mass exist in our galaxy. Credit: NASA, ESA, and L. Hustak (STScI).

The authors rule out migration of a world that formed beyond the snow line, for this origin would have produced the heavier elements we do not see here. Instead, they believe that GJ 3470b formed where it is today, showing that sub-Neptunes can form with atmospheres that are the result of direct accretion from the protoplanetary disk onto a rocky core. The implication is that we are looking at a planet-forming process that is essentially distinct from more massive planets, one in which the gas envelope is not enriched to any great degree by later collisions.

There is so much to learn about this, indicating just how far we have to go in our understanding of such low-mass, star-hugging planets. The authors point to GJ 3470b as a prime target for the James Webb Space Telescope. Every time I read something like this I think about how much is riding on JWST being launched successfully and can only keep my fingers crossed. For studying atmospheric chemistry is going to require powerful space-based resources as we start delving into atmospheres on worlds this small and aim at rocky worlds that are smaller still.