One of the many legacies of the Voyager spacecraft is the Interstellar Mapping and Acceleration Probe (IMAP). Scheduled for a 2024 launch, IMAP has as part of its charter the investigation of the solar wind’s interactions with the heliosphere, drawing on data from an area into which only the Voyagers have thus far ventured. Let me hasten to add that IMAP will stay much closer to home, orbiting the Sun-Earth L1 Lagrange point, but like the Interstellar Boundary Explorer (IBEX), it will help us learn more about a region physically reachable only by long-duration craft.

The fact that we’re still talking about Voyager as an ongoing mission is the story here. Launched in 1977, the doughty probes have kept surprising us ever since. In terms of their longevity, I noted in 2017 that when Voyager 1’s thrusters had begun to lose their potency (they’re needed to keep the spacecraft’s antenna pointed at Earth to return data), controllers were able to fire a set of backup thrusters that hadn’t been used for a whopping 37 years.

Even the Voyager Interstellar Mission, an extension to the primary, is long in the tooth, having begun when the two spacecraft had been in flight no more than twelve years. These days Voyager is all about power management, for we’re still getting good data. Voyager 1’s cosmic ray instrument is still at work, along with a plasma instrument, its magnetometer, and its low-energy charged particle instrument. Voyager 2 likewise studies cosmic rays, operates two plasma instruments, a magnetometer, and its own low-energy charged particle instrument.

Voyager instruments are proving to be as tenacious as bulldogs. Consider: Voyager 2’s cosmic ray subsystem (CRS) continues to run although engineers have turned off the heater that keeps it warm to save power, as part of a new power management plan for both spacecraft. The CRS now functions at -59 degrees Celsius, a good 15 degrees colder than it was originally tested for back in the days before launch. Voyager 1’s ultraviolet spectrometer continued to function for years after losing its heater as part of an earlier power strategy implemented in 2012.

Voyager project manager Suzanne Dodd (Jet Propulsion Laboratory) notes how important it is to make choices about power and instruments, given that the heat available from the three radioisotope thermoelectric generators (RTGs) aboard each craft decreases with time, for each spacecraft produces 4 fewer watts of electrical power each year. We’re down to 60 percent of the heat energy the RTGs could produce at launch, so hard decisions have to be made about which systems to keep operational. Says Dodd:

“It’s incredible that Voyagers’ instruments have proved so hardy. We’re proud they’ve withstood the test of time. The long lifetimes of the spacecraft mean we’re dealing with scenarios we never thought we’d encounter. We will continue to explore every option we have in order to keep the Voyagers doing the best science possible.” 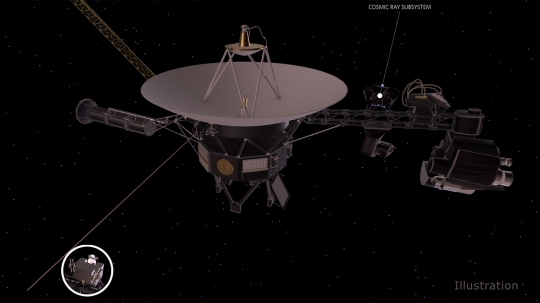 Image: This artist’s concept depicts one of NASA’s Voyager spacecraft, including the location of the cosmic ray subsystem (CRS) instrument. Both Voyagers launched with operating CRS instruments. Credit: NASA/JPL-Caltech.

The cosmic ray subsystem had its heater turned off despite its role in detecting Voyager 2’s passage through and exit from the heliosphere, the ‘bubble’ produced by the outflow of solar wind particles from the Sun. One aspect of this difficult choice is that the CRS can only look in specific fixed directions, making its heater in this environment expendable. Voyager 2 is driving the new power plan because it has one more instrument collecting data than Voyager 1.

If there is one place where power remains essential to the last, it’s the fuel lines that power the Voyager thrusters. In addition, Voyager 2’s current thrusters are degrading, just as Voyager 1’s did, forcing a switch to trajectory correction maneuver (TCM) thrusters last used during the encounter with Neptune in 1989. That switch should take place later this month. Let’s give a nod to Aerojet Rocketdyne, whose MR-103 thrusters have performed beyond all expectation, as has the mission itself, originally slated to last but five years.

One day, probably in the coming decade though perhaps late in it, the amount of electrical power needed to keep both spacecraft operational will no longer be available. Here’s hoping we get at least eight more years out of the Voyagers so that they’re still with us on their 50th anniversary. My own hunch is that the gifted people managing the Voyager Interstellar Mission may just find enough tricks to get them through to 2030 before the flow of data ceases.

As I’m still delighted to say, this mission isn’t over. Go Voyager.