A Gravitational Wave Approach to Exoplanets

We should always be on the lookout for new ways of finding exoplanets. Right now we’re limited by our methods to stars within the neighborhood of the Sun (in galactic terms), for both radial velocity and transit detections are possible only around brighter, closer stars. The exception here is gravitational microlensing, capable of probing deep into the galaxy, but here the problem is one of numbers. We simply don’t make enough detections this way to build up the kind of statistical sample that the Kepler mission has provided in terms of transiting planets.

So how significant is this kind of selection bias, which thus far has been forced upon us? Without knowing the answer, we would do well to explore ideas like those put forward by Nicola Tamanini (AEI Potsdam) and colleague Camilla Danielski (CEA/Saclay, Paris). The two scientists are looking at the possibilities of gravitational wave astronomy, looking toward the launch, in the 2030s, of LISA, the Laser Interferometer Space Antenna. 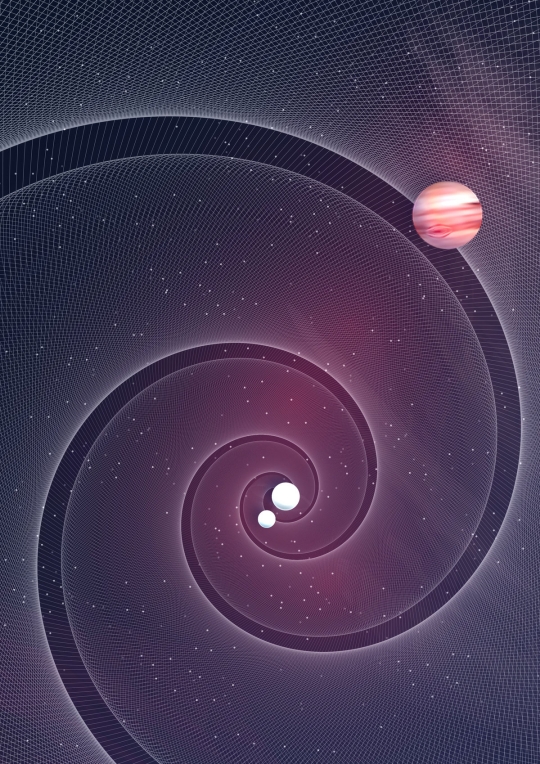 This is rarified air indeed, and the kind of target in play is likewise a rarity, giant exoplanets orbiting detached double white dwarf binaries (DWDs). These are intriguing objects, eclipsing double white dwarfs, remnants of stars like our Sun that have passed beyond their red giant phase. Short-period DWDs with orbital periods less than one hour are rarer still. But they’re worth seeking out because these short-period binaries generate powerful gravitational waves.

What the authors propose in their new paper in Nature Astronomy is to use gravitational waves to find circumbinary planets, worlds that orbit both stars in the binary. We have no planets around white dwarf binaries in our catalog at present, but LISA should be able to remedy that by identifying DWDs both inside and outside the Milky Way. Perturbations in the gravitational wave signal would then flag the presence of a third gravitationally bound object, a giant planet. Thousands of DWDs are expected to be found, producing no shortage of targets.

Tamanini likens the method to Doppler modulations of the kind we use with radial velocity studies, this being their gravitational wave analog. But significantly, gravitational waves are not affected by the kind of stellar activity that can confound radial velocity signals. Nor are we hampered by distance to the degree we are when using electromagnetic means, for gravitational wave perturbations should be apparent from anywhere in the galaxy and nearby galaxies as well. The scientist believes LISA could detect exoplanets down to about 50 Earth masses throughout this range.

If Tamanini’s conclusions are valid, the method would therefore bring the kind of large statistical sample we derived from Kepler to the domain of post-main sequence stellar systems, which means we are pushing into regions in what he calls the ‘planetary Hertzsprung–Russell diagram’ that have not yet been explored. Valid over the entire galaxy, the data would be free of selection effect. Moreover, the paper points out that follow-up observations of close-in DWDs will be helpful in confirming the LISA identification and deepening our knowledge of its characteristics:

Imaging of CBPs [circumbinary planets] around DWDs can be used to test the presence of a second generation of exoplanets in the outer regions of a planetary system, and consequently to provide constraints on migration theories. Emission spectra of these objects will furthermore allow us to estimate their temperature and the main molecular component of their atmosphere, making direct connections to chemical element distributions in the atmosphere of white dwarfs. This would also allow to better understand the observed white dwarf pollution effect. On the other hand, if an existing CBP accretes mass after a common-envelope stage, it becomes brighter, further decreasing the already low planet-to-white dwarfs contrast, meaning that also first-generation, more mature exoplanets can be imaged.

So we are looking at a kind of exoplanet about which we know nothing, if it indeed exists, but bear in mind that about half ot the stellar population occurs in multiple star systems. LISA is expected to measure gravitational waves from thousands of DWDs. Exoplanets here would yield insights into the kind of planet that survives a star’s red giant phase, while probing the regime of any second generation planets — those that form after the red giant phase is complete. We further our knowledge even if LISA finds no exoplanets around DWDs, for then we’ve set statistical constraints on the last phase of planetary evolution.