These are unusual times for a site that usually begins its investigations no closer than the outer Solar System (asteroids are an exception). But there is no way to ignore the Apollo 11 anniversary, nor would I even consider it. Tomorrow I’ll have further reminiscences from Al Jackson, who was on the scene in Houston when Apollo touched the Moon, and on Friday a piece from Neil McAleer with substantial portions of a speech Neil Armstrong gave in Australia in 2011.

For today, a look at how the public views space exploration in our era and earlier, with the surprising result that there seems to be more interest in space than I had assumed. In fact, while it has often seemed as if interest peaked with the moon landings and then slackened, turning instead to space programs of the imagination via high-budget films, there is new evidence that the work we track on Centauri Dreams has a good deal of support.

According to a recent survey, over 70 percent of Americans liken the exploration of space to the European voyages that opened up the western hemisphere and established outposts and trade routes throughout Asia and the Pacific. That’s a higher number than I would have expected, one that reflects, in the words of Jon Miller, director of the International Center for the Advancement of Scientific Literacy at the University of Michigan’s Institute for Social Research, “…the deep-seated impact of the first moon landing in American culture.” 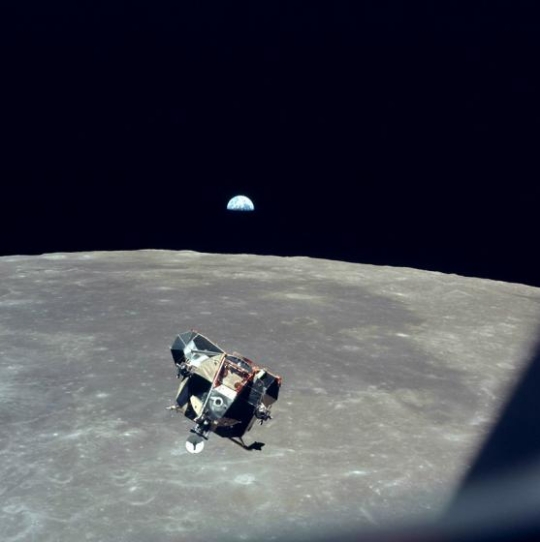 Image: Taken by Michael Collins, this photo shows the lunar excursion module, the Moon, and the Earth from Columbia, the command module, as Armstrong and Aldrin return from the lunar surface. Credit: NASA.

So is this a simple nod to a cherished memory? After all, those who were alive in those days will never forget the experience, a global one, of leading their daily lives with one eye always on the three astronauts on their way to the Moon. Maybe there’s more to it than that, given that the percentage of adult Americans who were alive on July 20, 1969, is only 45%. There does seem to be some movement in peoples’ perception of space exploration, one that this survey tracks.

We’re dealing with the Michigan Scientific Literacy Study, compiled in 2018, with data collected by AmeriSpeak, which is a service of the National Opinion Research Center at the University of Chicago. The survey was taken in November and December of last year and included both online and telephone interviews with 2,312 adults age 18 and older. I have no expertise whatsoever in such surveys, and so cannot judge this one’s accuracy. But let me quote it:

A national survey conducted in 1988 found that 67% of American adults agreed that we should think of space exploration in terms similar to the early explorers of this planet. Thirty years later, a 2018 national survey found that 72% of American adults agreed with the same statement. This level of continuing general support for space exploration indicates that most Americans see the last six decades as a period of positive achievement and that they are supportive of continued efforts to explore space.

Again, I’m surprised. Maybe I’ve been too pessimistic. The study from thirty years earlier refers to the work of the Public Opinion Laboratory at Northern Illinois University, which sampled 2,041 adults by telephone on the same topics. This one was published in the National Science Board’s Science and Engineering Indicators for 1988. The current survey repeated a question from 1988’s survey, asking for agreement or disagreement on this statement: “The space program has paid for itself through the creation of new technologies and scientific discoveries.”

Here again the numbers were something of a surprise, at least to me. Thirty years ago, 56 percent of adults agreed with the statement. In 2018, that percentage had risen to 69%. That’s a fairly robust figure, and it removes the perceived benefits of the space program from the experience of having watched the Apollo missions themselves. Says Miller: “This pattern reflects a long-standing public belief in the indirect benefit of the space program apart from spectacular events like the lunar landing.”

The question I mentioned in the first paragraph on the exploratory impulse asked respondents to agree or disagree with the statement “The United States should seek to explore space in the same spirit that led Europeans to explore this planet in earlier centuries.” 1988’s figure was 69 percent, roughly the same as the 72% tagged in the 2018 results. Interestingly, older adults were more supportive of this view in 2018 than they were in the earlier survey, while men were more supportive than women, though with a difference that has narrowed over the years.

You can see the results of the 2018 survey here. Another excerpt:

Here’s the survey’s Table 2, labeled “Public agreement with statement concerning the value of new technologies from the space program, 1988-2018.”

What to make of all this? It’s heartening to see the rise, a steady one, in the proportion of adults who believe the space program has been worthwhile in producing new technologies and generating scientific data. This recognition of the program’s value and the substantial majority of Americans who see space exploration as similar to earlier periods of exploration shows that there is public support for future missions. At the same time, note this: One in five adult Americans were unable to recall any achievements of the space program.

Let’s go with the other 4/5ths. It’s no surprise that, for them, the landing of Apollo 11 on the Moon ranks as the most important result of the space program in its first 60 years, and the media attention to Apollo accompanying the anniversary reinforces that perception. But even as more than 70 percent of Americans want to see space exploration continue, there is no information within this work that shows us how to translate this interest into larger budgets for space.

Remember that Apollo at one point was absorbing 4.4 percent of the federal budget. According to a recent analysis by The Planetary Society (reported in this CBS news analysis), that is the equivalent of spending NASA’s current annual budget on a single project and sustaining the effort for over a decade, some $288.1 billion in inflation-adjusted dollars. This at a time, at least in the earlier ’60s, when rather than today’s gigantic deficits, the United States had a budgetary surplus and increased spending as a way to stimulate the economy was much in the air.

So while a new Gallup poll backs the University of Michigan study that most Americans support space exploration, the kind of big-ticket effort that Apollo represented is ruled out by financial realities. Even so, exciting exoplanet discoveries and spectacular one-off missions like New Horizons are holding the public’s interest, and there is a sense that space delivers tangible results in everyday life as well as scientific return. As we celebrate Apollo 11, then, we can remember how unique the entire Apollo effort was while recognizing that there is still support for creative missions that expand the human spirit while operating on a much slimmer budget.

It would be fascinating to see similar polling on space in Europe and Asia. If anyone has any leads on such, please let me know.