Al Jackson shares more memories of Apollo this morning in his account of a little known spacecraft component, the Abort Guidance System. A NASA historical document on computers aboard the Apollo spacecraft refers to the Abort Guidance System as “…probably the most obscure computing machine in the manned spaceflight program to date.” The AGS was a backup computer system offering the capability of aborting the mission if the Lunar Module’s primary guidance system failed during descent to the lunar surface, ascent or rendezvous.

The very invisibility of the system is in its way a tribute to the primary guidance and navigation systems, for while the AGS could abort a landing, it was never needed for that purpose. But NASA’s abort policy made its presence mandatory — an abort would be ordered if one additional system failure could potentially cause the loss of the crew. Thus a loss of either the primary guidance and navigation control system or the AGS would have caused an abort. Usefully, the AGS could verify navigation data when the Lunar Module was behind the Moon. Al was a subsystem expert on the AGS as part of his role as instructor on the Lunar Module Simulator. Here are his further thoughts.

The Apollo Spacecraft News Reference, compiled for the press, is 330 pages long and contains not a single note about the Lunar Module (LM) Abort Guidance System (AGS). There is, justifiably, a fair amount about the Primary Guidance, Navigation, and Control System (PGNCS). As it happened the Abort Guidance System was never used for a landing abort on any mission, even though it was on and in backup mode if it was needed.

The AGS existed due to a NASA requirement that at the Moon there could not be a single-point failure in the Guidance, Navigation and Control (GN&C) system for the LM. During the Saturn V launch the trajectory was controlled, for a while, by a computer with the exotic name of Instrument Unit. If the Instrument Unit failed, the crew could switch control of the Saturn to the Command Module’s computer; both these system had abort modes. Once inserted into Earth orbit, the Command Module (CM) Primary Guidance, Navigation, and Control System was programmed to do aborts from everywhere: from Earth orbit and after insertion onto the transfer orbit to the Moon. 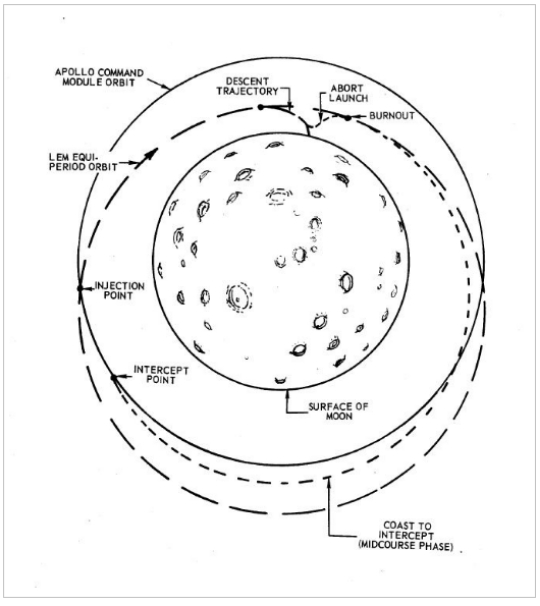 On Apollo 13 a nominal translunar abort could not be done because the Service Module Motor was gone. The primary computer in the LM was used, though the procedure had to be created on the spot. Apollo 13 was flying the first non-free-return trajectory of the Apollo missions, so Lunar Orbit Insertion became Trans Earth Injection, so to speak. Once the LM Descent Engine was fired to put the LM on a trajectory that made an Earth re-entry, the AGS was used for most of the return to Earth, which included two mid-course burns to correct the trajectory. This was necessary because the Primary Guidance and Navigation System used too much water — it used gyros that needed cooling — and the LM’s supply of water was tight.

The AGS was a pioneer in that it was the first “strapped-down” guidance system. The system used sensors fixed to the LEM to determine motion, rather than a stable platform as in conventional inertial guidance systems. The entire system occupied only 3 cubic feet and consisted of three major components: (a) an Abort Electronic Assembly (AEA), which was the computer; (b) an Abort Sensor Assembly (ASA), which was the inertial sensor; and (c) a Data Entry and Display Assembly (DEDA), which was a simple version of the data entry keyboard on the primary system. (There is a nice compact technical description of the AGS in Wikipedia: https://en.wikipedia.org/wiki/Apollo_Abort_Guidance_System).

Buzz Aldrin got a doctorate from MIT with a thesis about manual orbital rendezvous of two spacecraft. The primary Guidance Navigation Computer did this perfectly and Buzz thought the AGS was almost as good. Buzz did practice a lot of rendezvous without navigation aids or the primary system or the AGS but he never had to do it in a flight, though I think itched to. 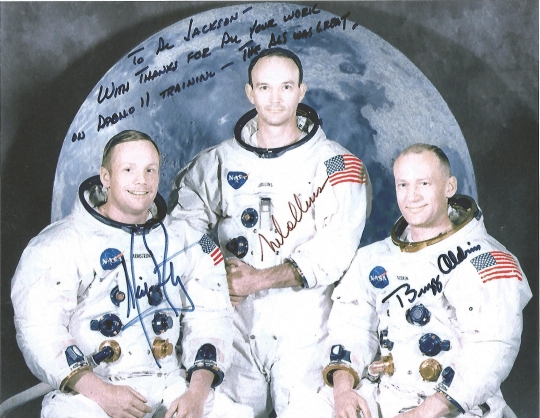 Image: Buzz put a personal message on this photo to me. I did not have much to do with the creation of the Abort Guidance System, AGS, but I was the prime AGS instructor in Houston at the Manned Space Craft Center 1967-1970. The message from Buzz reads: “To Al Jackson — With thanks for all your work on Apollo 11 training — the AGS was great.”

The AGS worked fine. I know of one funny story. When flying with the computers they had to have a ‘coordinate’ system to know where the spacecraft was and where to point it. Apollo had a platform called the Inertial Measurement Unit, designed by MIT, who were the super masters of doing inertial navigation. The IMU could be aligned from the ground or through star-sighting from the Command Module or the Lunar Module.

The AGS could be lined up with this coordinate system by communicating with the primary system. During Apollo 10, the AGS was aligned with the primary. However, after the ‘practice’ descent, ready to rendezvous with the Command Service Module, the Lunar Module had to stage, separating from the descent stage. This was done with the AGS in guidance control. Just prior to separation the LM did a wild spin. A mode switch was in the wrong setting, which led to Gene Cernan’s famous ‘Son of a Bitch’… All the technical details are in the mission report, beginning at 102:45:15 in the document: https://history.nasa.gov/afj/ap10fj/as10-day5-pt20.html.

[[PG: Cernan described the event this way: “I saw the lunar horizon go by about seven or eight times in ten seconds. That’s a hair-raising experience. That’s when I said, ‘Son of bitch, what the hell happened?’” Cernan and Tom Stafford jettisoned the LM’s Descent Stage and were quickly able to regain control, guiding the craft to rendezvous with the Command Module.]]

Another funny instance involves Bill Tindall. Howard Wilson Tindall, Jr. (February 20, 1925 – November 20, 1995) was an American aerospace engineer, NASA engineer and manager. He was an early expert in orbital mechanics and coordinated mission techniques during the Apollo program. In the words of flight director Gene Kranz, Tindall “was pretty much the architect for all of the techniques that we used to go down to the surface of the Moon.”

Bill was a sharp and amusing guy. Here is a note of his referring to how small the memory in the AGS was. In the memo, CSI refers to Co-elliptic Sequence Initiation, and CDH is Constant Delta Altitude, while a ‘G’ mission is a lunar landing and rendezvous mission. MPAD stands for Mission Planning and Analysis Division. Because the image may be hard to read online, I’ll also supply the main text, slightly truncated, after it. 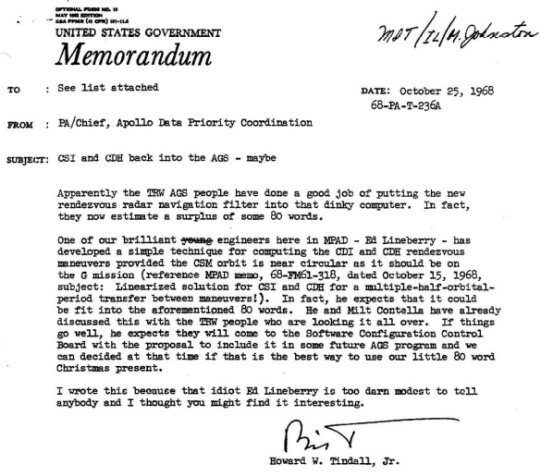 Subject: CSI and CDH back into the AGS – maybe

Apparently the TRW AGS people have done a good job of putting the new rendezvous radar navigation filter into that dinky computer. In fact, they now estimate a surplus of some 80 words.

One of our brilliant young engineers here in MPAD — Ed Lineberry — has developed a simple technique for computing the CSI and CDH rendezvous maneuvers provided the CSM orbit is near circular as it should be on the G mission… In fact, he expects that it could be fit into the aforementioned 80 words. He and Milt Contella have already discussed this with the TRW people who are looking it all over. If things go well, he expects they will come to the Software Configuration Control Board with the proposal to include it in some future AGS program and we can decide at that time if that is the best way to use our little 80 word Christmas present.

I wrote this because that idiot Ed Lineberry is too darn modest to tell anybody and I thought you might find it interesting.

I remember when Pete Conrad and Alan Bean were in the Lunar Module Simulator cockpit talking about a failure of the primary guidance just before ascent, but the AGS was working. Then the ascent engine would not fire. One could access the ascent engine within the LM cockpit. Conrad said “I am gonna make sure we bring a screwdriver. We will take the ‘lid’ off the engine and hot wire it!”

The Abort Guidance System was tested on Apollo 9 and Apollo 10 (10 with the wrong mode switch settings). However, it was running in the background on all Apollo missions that used the LM. So Buzz is right about it working well. 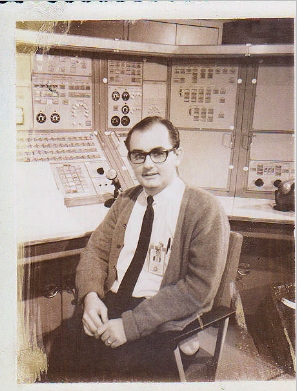 Here is a picture of me at the Lunar Module Simulator Instructors Console, AGS side, taken by a CBS crew for Cronkite’s 20th Century in 1970. The back of my head appeared for about 3 seconds on TV. 3 seconds! (Walter Cronkite did not travel with that film unit.)

And here is the LMS cockpit (crew cabin). Panel 6 is where the AGS keyboard and display are. Click to enlarge the image. 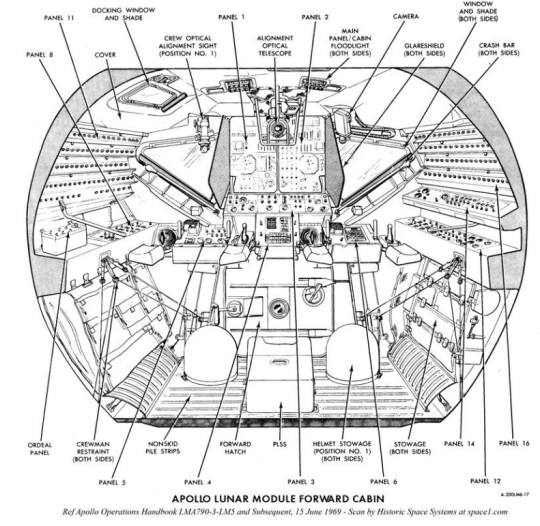 Many Apollo documents are at the following site, though I don’t think all MSC internal documents are there. https://www.ibiblio.org/apollo/Documents/