One thing that James E. Webb insisted on during his tenure as NASA administrator was that the space program was larger than an attempt to get humans to the Moon. The man who did so much to ensure that Apollo would succeed, and who will be rightfully honored in the form of the James Webb Space Telescope, was a proponent of exploration throughout the Solar System through robotic craft, and weather and communications satellites that would become part of a permanent reliance on a growing space infrastructure. Marc Millis noted some of the results in his recent essay.

For while the frustration of abandoning the Moon in the 1970s lingers, we do have over 4600 spacecraft in Earth orbit, many of them doing the kind of work Webb envisioned. We’ve completed the initial reconnaissance of the Solar System and made our first tentative ventures into the Kuiper Belt and out past the heliopause. We’re charting exoplanets and looking to explore Saturn’s largest moon. So these are things to keep in mind when frustration begins to build.

The anniversary of Apollo’s first landing was a time for looking back, but The Planetary Society has just reminded us that we have to keep looking ahead as well. With the successful deployment of the solar sail aboard LightSail 2, we are seeing the kind of change Millis talked about in action. Much of the space business has turned commercial, while we continue to sort out how to handle the change (SLS or Falcon Heavy?), and in the midst of this, private organizations using off-the-shelf hardware can produce crowd-funded missions of real value.

We’re in that confusing time — one that future historians will be able to sort out more readily than we can define it today — when the pace of technological change drives new models for the accomplishment of grand goals. How we interrelate big government projects with corporate space activities and private contributions will define an era that will one day have its own name, just as the 1960s could be partially defined by the term ‘Space Race.’ And it’s understandable that Planetary Society CEO Bill Nye should be proud of what his organization has accomplished: “We are advancing space science and exploration,” says Nye. “We are democratizing space. We are innovating.”

Apollo 8 gave us gorgeous photographs of our planet seen entire, a blue and brown crystal filling the frame. Now we have LightSail 2’s view of Earth, showing vast portions of the Pacific Ocean and part of the North American landmass. CubeSats in their various configurations make it possible for organizations like The Planetary Society as well as universities and other private groups to contemplate missions that move the ball forward. In the case of LightSail 2, we will have learned more about sail deployment, and orbit raising by the pressure of sunlight alone. 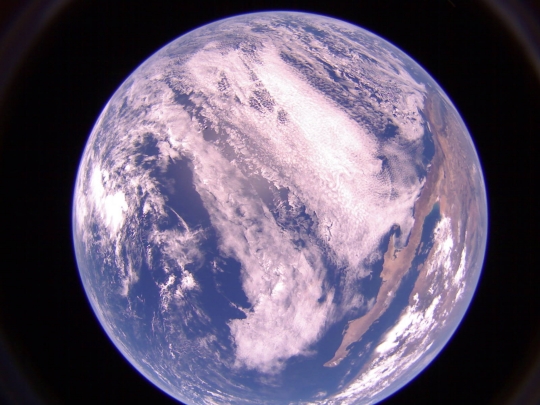 Image: This image of Earth, which shows the Pacific Ocean with Baja California and Mexico on the right, was captured by LightSail 2 on 18 July 2019 at 21:45 UTC while the spacecraft was in range of its ground station at Cal Poly San Luis Obispo in California. Though LightSail 2’s altitude is only 720 kilometers, its 185-degree, wide-angle camera lenses allow it to capture horizon-to-horizon Earth imagery. Credit: The Planetary Society.

The deployment command to LightSail 2 went out at about 1445 EDT (1845 UTC) on the 23rd, with the momentum wheel, responsible for orienting the sail in relation to the Sun, spinning up successfully. Now we wait for images of the deployed sail, which should be downloaded today.

Here’s a photo of the LightSail 2 team set up for sail deployment. It’s impossible to ignore the contrast between the Mission Control operations we see at NASA (think of the operation Chris Kraft ran!) and the ad hoc effort at Cal Poly. What makes this possible is vision, public financial support and technology trends working in favor of small, light spacecraft, not to mention gritty persistence. I’ll feel better when I’ve seen actual sail images, but for right now, things look good, and the entire Planetary Society team deserves our congratulations. 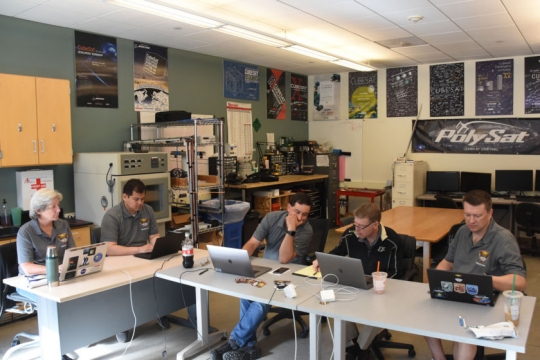 You can track LightSail 2’s condition on its own Mission Control page, which offers data on temperature, degree of rotation, control mode and location over the Earth. 40,000 private donations (totalling in the region of $7 million) went into LightSail 2 over 10 years. The results of the effort will also feed a NASA project called Near Earth Asteroid Scout, which will likewise employ CubeSat technology to visit an asteroid early in the 2020s. Launched by a Falcon Heavy, LightSail 2 emphasizes today’s mix of commercial, corporate and private effort.

I fall back on what Marc Millis said in these pages on Monday:

It is my hope that progress will continue along all these fronts and improve the human condition. The next steps toward the Moon, Mars and recreational spaceflight will usher in a new era, a suitable name for which will probably be conceived years later. It’s certainly no longer a “space race” with only one finish line. It is the beginning of a new stage of humanity.