If it seemed amazing to me that 50 years had gone by since Apollo 11, it surprises me as well to realize that, on a much shorter scale, the Transiting Exoplanet Survey Satellite (TESS) has been at work for a full year. In a recent news release, NASA is calling this “the most comprehensive planet-hunting expedition ever undertaken,” presumably a nod to the mission’s broad sky coverage as opposed to the sharply confined field of view of the Kepler mission.

Whereas Kepler took a ‘long stare’ at its starfield in Cygnus and Lyra, TESS keeps alternating what it sees, looking at a 24-by-96 degree section of sky for 27 days at a time. Moreover, TESS scientists are homing in on stars much closer to our Solar System. While Kepler was looking along the Orion arm of the galaxy at stars generally between 600 and 3,000 light years out (more distant stars were too faint to observe transit lightcurves), TESS puts the emphasis on stars closer than 300 light years, though with a similar method of looking for transits. The mission will wind up studying 85 percent of the sky, an area 350 times greater than Kepler.

George Ricker, TESS principal investigator at MIT, is thinking the mission he leads has had an outstanding first year:

“The pace and productivity of TESS in its first year of operations has far exceeded our most optimistic hopes for the mission. In addition to finding a diverse set of exoplanets, TESS has discovered a treasure trove of astrophysical phenomena, including thousands of violently variable stellar objects.”

That last bit is a nod to the fact that even as TESS hunts exoplanets, beginning with the southern sky in July of 2018, it also has been on the lookout for supernovae and other deep sky objects within its line of sight. The exoplanet haul in the past year includes 21 planets, with 959 candidates still waiting for confirmation by ground-based telescopes (the candidate list will swell enormously as the voluminous data yet to be analyzed comes into play). Its first year concluded, TESS is now looking at the northern sky. Bear in mind that the sections of sky TESS looks at can overlap — some parts of the sky thus wind up being observed for almost a year.

This is helpful, because an area near the poles in its observational ‘sphere’ will be under constant observation, producing targets for follow-up with the James Webb Space Telescope. The video below is useful for illustrating the TESS sky-coverage technique. Have a look, while pondering the words of Padi Boyd, a TESS project scientist at NASA GSFC:

“Kepler discovered the amazing result that, on average, every star system has a planet or planets around it. TESS takes the next step. If planets are everywhere, let’s find those orbiting bright, nearby stars because they’ll be the ones we can now follow up with existing ground and space-based telescopes, and the next generation of instruments for decades to come.”

Among the early TESS catches: 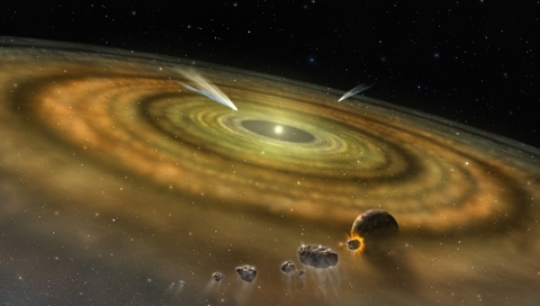 We’re extremely early in the analysis of TESS data, considering that an object must make three transits to be considered an exoplanet candidate, after which a number of additional checks remain to be made before the object is submitted to study by ground-based telescopes. When the dust settles, TESS is expected to land more than 20,000 exoplanets, dozens of them the size of Earth and up to 500 planets less than twice the size of Earth. Of the total haul, scientists anticipate that the observatory will find about 17,000 planets larger than Neptune.

“The team is currently focused on finding the best candidates to confirm by ground-based follow-up,” said Natalia Guerrero, who manages the team in charge of identifying exoplanet candidates at MIT. “But there are many more potential exoplanet candidates in the data yet to be analyzed, so we’re really just seeing the tip of the iceberg here. TESS has only scratched the surface.”