Looking for Life Under Flaring Skies

The faint glow of a directly imaged planet will one day have much to tell us, once we’ve acquired equipment like the next generation of extremely large telescopes (ELTs), with their apertures measuring in the tens of meters. Discovering the makeup of planetary atmospheres is an obvious deep dive for biosignatures, but there is another. Biofluorescence, a kind of reflective glow from life under stress, could be detectable in some conditions at astronomical distances.

New work on the matter is now available from Jack O’Malley-James and Lisa Kaltenegger, at Cornell University’s Carl Sagan Institute. The duo have been on the trail of biofluorescence for some time now, and in fact their paper in Monthly Notices of the Royal Astronomical Society picks up on a 2018 foray into biosignatures involving the phenomenon (citation below). Here the question is detectability in the context of biofluorescence as a protective mechanism, an ‘upshift’ of damaging ultraviolet into longer, safer wavelengths.

“On Earth, there are some undersea corals that use biofluorescence to render the sun’s harmful ultraviolet radiation into harmless visible wavelengths, creating a beautiful radiance,” says Kaltenegger.” Maybe such life forms can exist on other worlds too, leaving us a telltale sign to spot them.” 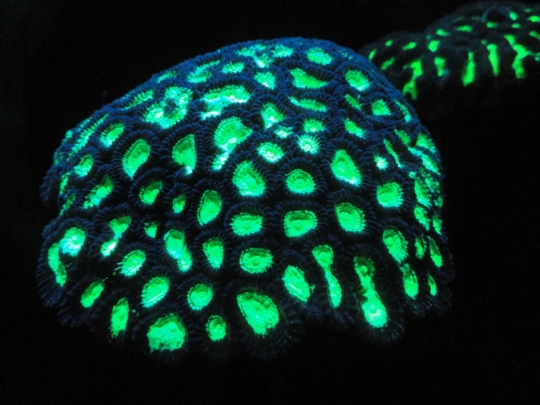 Biofluorescence in vegetation is an effect that is detectable from Earth orbit. Here the effect is comparatively small, accounting for 1-2 percent of the vegetation reflection signal, but of course it is also widespread given the coverage of vegetation over much of Earth’s surface. The phenomenon is also seen in corals, which produce a higher degree of fluorescence. Earth levels of biofluorescence are clearly too small to act as useful biosignatures for exoplanets, but higher levels may well occur elsewhere.

That’s because our early work on the atmospheres of Earth-sized planets will delve into systems around small M-dwarf stars. Such worlds are plentiful and the Transiting Exoplanet Survey Satellite (TESS) is expected to add to our inventory of habitable zone examples nearby. Even now, we have interesting targets: Proxima Centauri b, Ross 128b, TRAPPIST-1e, -f, -g, LHS 1140-b, for example, all of which orbit M-dwarf stars. And M-dwarf stars are known to flare.

This, in fact, is one of the cases originally made against life in such systems, for extreme X-Ray and UV radiation would create a challenging environment for even the simplest lifeforms. M-dwarfs vary in terms of the amount of radiation they produce; indeed, a planet around an inactive M-dwarf receives a lower dose of ultraviolet than Earth. But planets around active stars, particularly given the fact that the habitable zone is so close to the small star, receive much higher flux, and such flaring remains active for longer on M-dwarfs than on stars like the Sun.

Life could conceivably flourish underground on such worlds, or within oceans, but even on Earth, the authors note, we see biological responses like protective pigments and DNA repair pathways that are ways of mitigating radiation damage. The corals mentioned above use biofluorescence to reduce the risk of damage to symbiotic algae, absorbing blue and ultraviolet photons and re-emitting them at longer wavelengths.

Corals that display this phenomenon cover a mere 0.2 percent of the ocean floor, making for only a tiny change in our planet’s visible flux. But the situation could be different in actively flaring M-dwarf systems. To study the matter, O’Malley-James and Kaltenegger begin with a biofluorescent surface biosphere in a shallow, transparent ocean, adjusting the variables to simulate different ocean conditions. They vary fluorescent protein absorption and emission to produce values for reflected and emitted light. The assumption is that life evolving in conditions of extreme UV flux will produce ever more efficient fluorescence, in terms of absorbed vs, emitted photons (at maximum efficiency, all photons are absorbed and re-emitted).

The authors calculate the UV flux for different classes of M-dwarfs and quantify the outgoing emissions of common pigments during fluorescence. The model also includes atmospheric effects with varying cloud coverage, generating spectra and colors for hypothetical planetary conditions. False positives from mineral fluorescence are considered, as are signals produced by surface vegetation, with different fractions of surface coverings and biofluorescent life.

But let’s cut to the chase. A biosphere otherwise hidden from us could be revealed through the temporary glow resulting from the flare of an M-dwarf. From the paper:

Depending on the efficiency of the fluorescence, biofluorescence can increase the visible flux of a planet at the peak emission wavelength by over an order of magnitude during a flare event. For comparison, the change in brightness at peak emission wavelengths caused by biofluorescence could increase the visible flux of an Earth-like planet by two orders of magnitude for a widespread biofluorescent biosphere and clear skies, with low-cloud scenarios being more likely for eroded atmospheres. In an M star system, the reflected visible flux from a planet will be low due to the host star’s low flux at these wavelengths; however, the proposed biofluorescent flux is dependent on the host star’s UV flux, resulting in additional visible flux that is independent of the low stellar flux at visible wavelengths. This suggests that exoplanets in the HZ of active M stars are interesting targets in the search for signs of life beyond Earth.

If biofluorescence can evolve on the planets of active M-dwarf stars, it may turn out that high ultraviolet flux could be the key to reveal its existence. We need to quantify such effects because our ground- and space-based assets in the hunt for biosignatures are going to be homing in on the most readily studied planets first, and that means nearby worlds around red dwarfs. What O’Malley-James and Kaltenegger are doing is charting one possible signature that we may or may not find, but one which we now know to include in our investigative toolkit.