You would think that heading toward the Sun, rather than away from it, would not necessarily fall under Centauri Dreams’ purview, but missions like the Parker Solar Probe have reminded us that extreme environments are ideal testing grounds for future missions. Build a heat shield that can take you to within 10 solar radii of our star and you’re also exploring possibilities in ‘sundiver’ missions that all but brush the Sun in a tight gravity assist.

Or consider the two proposals NASA has just selected in the area of small satellite technologies, which grow directly out of its heliophysics program. Here, the study of the Sun’s interactions with the Solar System, and the consideration of Sun, planets and heliosphere as a deeply interconnected system, takes pride of place. Let’s start with a mission called SETH — Science-Enabling Technologies for Heliophysics. One of its two technology demonstrators, called the HELio Energetic Neutral Atom (HELENA) detector, involves solar energetic neutral atoms, which can provide advanced warnings of potential radiation threats to astronauts.

The other demonstrator aboard SETH is an optical communications technology expressly designed for CubeSats and other small satellites, one that could allow a hundred-fold increase in the return of deep space data. Building out a robotic infrastructure in the Solar System will involve increasingly miniaturized technologies. We can envision small satellite constellations that can network and operate one day in ‘swarm’ fashion to create a continuous presence around targets ranging from asteroids to the gas and ice giants that can shape their orbits. 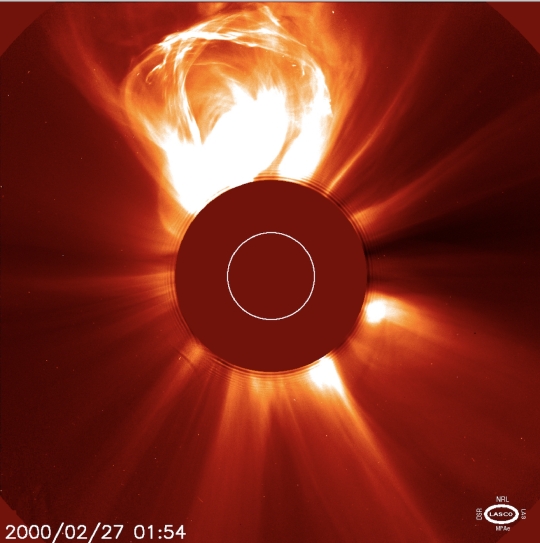 Image: NASA has selected two proposals to demonstrate technologies to improve science observations in deep space. The proposals could help NASA develop better models to predict space weather events that can affect astronauts and spacecraft, such as coronal mass ejections (CMEs). In this image, taken by the Solar and Heliospheric Observatory on Feb. 27, 2000, a CME is seen erupting from the Sun, which is hidden by the disk in the middle, so the fainter material around it can be seen. Credit: ESA/NASA/SOHO.

Toward a Large Solar Sail

But if you’re looking for a mission with real interstellar punch, consider Solar Cruiser, whose two technology demonstrations involve measurements of the Sun’s magnetic field structure and the velocity of coronal mass ejections (CMEs), those vast explosions of plasma that can create space weather nightmares for utility grids on Earth. Making this mission possible will be a solar sail of almost 1,700 square meters. The timing on this proposal seems propitious given The Planetary Society’s recent success at raising the orbit of LightSail-2 using sunlight. Pushing toward much larger designs is the next step.

“This is the first time that our heliophysics program has funded this kind of technology demonstration,” said Peg Luce, deputy director of the Heliophysics Division at NASA Headquarters. “Providing the opportunity to mature and test technologies in deep space is a crucial step towards incorporating new techniques into future missions.”

⛵️ A nearly 18,000-square-foot solar sail that would demonstrate the ability to use solar radiation as a propulsion system

☀️ An instrument called a coronagraph that would help scientists study explosions of material from the Sun pic.twitter.com/ZFCLwm4GTy

Lots to work with here, and I’m drawing together more information about Solar Cruiser, which would not only be by far the largest solar sail yet deployed, but would also experiment with using the momentum of sunlight to continuously modify its orbit. This would allow us to obtain views of the Sun that orbits involving gravity alone would not make possible. Robert Forward explored the original concept and introduced it to the public first in the pages of Analog and then in his book Indistinguishable from Magic (1995), where he considered how we might use such spacecraft near the Earth. He called a spacecraft that uses a solar sail to hover over a region rather than orbiting the Earth a ‘statite,’ and explained it this way: 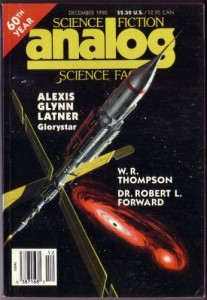 …I have the patent on it — U.S. Patent 5,183,225 “Statite: Spacecraft That Utilizes Light Pressure and Method of Use”… The unique concept described in the patent is to attach a television broadcast or weather surveillance spacecraft to a large highly reflective lightsail, and place the spacecraft over the polar regions of the Earth with the sail tilted so the light pressure from the sunlight reflecting off the lightsail is exactly equal and opposite to the gravity pull of the Earth.

Here we are using a solar sail for station-keeping rather than transport, and Solar Cruiser may turn out to be the first time we experiment with the technique, which offers options that other kinds of satellite do not:

With the gravity pull nullified, the spacecraft will just hover over the polar region, while the Earth spins around underneath it. Since the spacecraft is not in orbit around the Earth, it is technically not a satellite, so I coined the generic term ‘statite’ or ‘-stat’ to describe any sort of non-orbiting spacecraft (such as a ‘weatherstat’ or ‘videostat’ or ‘datastat’).

Image: Analog‘s December, 1990 issue contained an article by Robert Forward describing the ‘polesitter’ concept, one of many innovative ideas the scientist introduced to a broad audience. Credit: Condé Nast.

Can Solar Cruiser push these ideas forward in orbits near the Sun? Forward called orbits that are non-Keplerian ‘displaced orbits’ and also referred to such satellites as ‘polesitters.’ It will be fascinating to see how far Solar Cruiser will explore such capabilities as part of its larger mission, which should also teach us much about large sail materials and deployment.

What will follow is a nine-month study period, with both proposals funded at $400,000 for concept studies, after which one of the two proposals will be selected to go into space. Launch will take place in October of 2024 as a secondary payload along with the Interstellar Mapping and Acceleration Probe (IMAP) probe, another mission we’ll be following closely as it investigates the interactions of the solar wind with the local interstellar medium (the spacecraft will orbit the Sun-Earth L1 Lagrangian point and will also be used to monitor space weather).