These days we have a keen interest in small red dwarf stars (M-dwarfs) not only because they’re ideal for study, with deep transits of worlds in their habitable zones and the prospect of future analysis of their atmospheres, but also because they are so plentiful. Comprising perhaps 80 percent of all stars, they may well be home to the great majority of planets in the galaxy. And while they are common, they’re also long-lived, so that life would have plenty of opportunity to develop.

Now we have word of new work using both the Transiting Exoplanet Survey Satellite (TESS) and the Spitzer Space Telescope. TESS is, of course, a transit hunter, looking for the telltale dips in light from a parent star when a planet passes in front of it. The planet in question is LHS 3844b, about 48.6 light years out, and discovered by TESS in 2018. Follow-up observations in the infrared with Spitzer have detected light from the surface of this newly discovered world, allowing study of its atmosphere and composition. Note: This is not direct imaging; see below for more on the techniques used.

LHS 3844b orbits its star in 11 hours, making it almost certainly tidally locked; i.e., with one side always facing the star. The Spitzer data show that the dayside here reaches 770 degrees Celsius, while the nightside temperature is consistent with 0 Kelvin. In other words, the researchers could detect no heat being transferred from one side to the other, a process we would expect in the presence of an atmosphere.

Heat transfer is a mechanism that could ameliorate the effects of tidal lock, spreading warmth to the dark side and moderating global temperatures, but it takes an atmosphere to do that. We learn, then, that LHS 3844b is an object something like the Moon, or at any rate, a large version of it. Laura Kreidberg (Harvard-Smithsonian Center for Astrophysics), lead author of the paper that appears in Nature, says that this planet “…matches beautifully with our model of a bare rock with no atmosphere.” The scientist continues:

“We’ve got lots of theories about how planetary atmospheres fare around M dwarfs, but we haven’t been able to study them empirically. Now, with LHS 3844b, we have a terrestrial planet outside our solar system where for the first time we can determine observationally that an atmosphere is not present.” 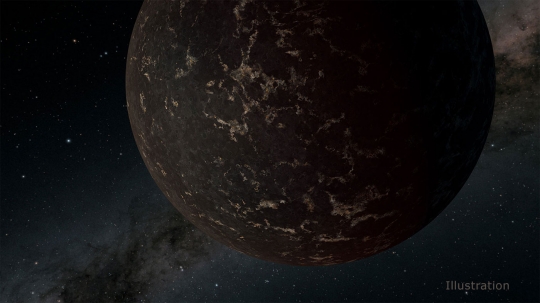 Image: This artist’s illustration depicts the exoplanet LHS 3844b, which is 1.3 times the mass of Earth and orbits an M dwarf star. The planet’s surface may be covered mostly in dark lava rock, with no apparent atmosphere, according to observations by NASA’s Spitzer Space Telescope. Credit: NASA/JPL-Caltech/R. Hurt (IPAC).

This is painstaking analysis indeed, drawing on phase curve data from the planet’s transits. Phase curves are a combination of reflected light and thermal emission from the planet. Unable to resolve the planet from the host star, astronomers must work with their combined light, and observe light variations of exquisite subtlety as planets go through phase changes as they orbit. A phase curve, then, is the time-dependent change in the brightness of a planet as seen from Earth during one orbital period. 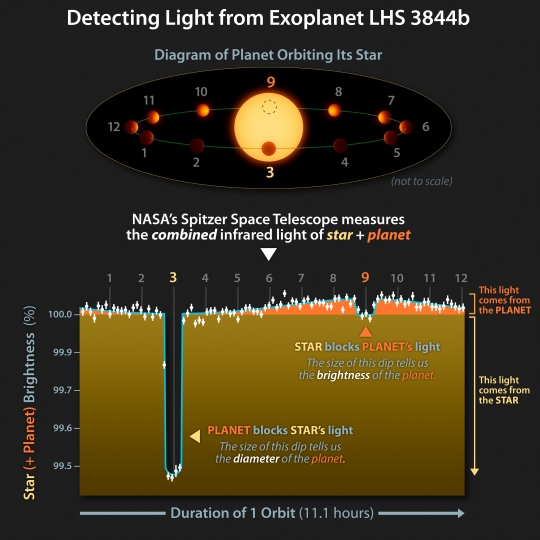 Learning about the atmosphere (or lack thereof) of a small rocky world — LHS 3844b has a radius 1.3 times that of Earth — is therefore something of a coup, and bodes well for future discovery. The authors infer from the planet’s reflectivity (albedo) that it is covered with basalt, much like the mare of the Moon, which is probably an indication of volcanic activity in the distant past. From the paper:

We modeled the emission spectra of several rocky surfaces and compared with the measured planet-to-star flux… We considered multiple geologically plausible planetary surface types, including primary crusts that form from solidification of a magma ocean (ultramafic and feldspathic), secondary crust that forms from volcanic eruptions (basaltic), and a tertiary crust that forms from tectonic re-processing (granitoid). Governed by the reflectivity in the visible and the near-infrared and the emissivity in the mid-infrared, the surface types have distinct emission spectra. The measured planet-to-star flux for LHS 3844b is most consistent with a basaltic composition. Such a surface is comparable to the lunar mare and Mercury, and could result from widespread extrusive volcanism.

But this is a world much larger than the Moon, so what happened to its atmosphere? M-dwarf flare activity is thought to erode early planetary atmospheres, especially given how closely worlds like this orbit their star. The researchers rule out an atmosphere of over 10 bars (Earth’s atmospheric pressure at sea level is about 1 bar), and largely rule out one between 1 and 10 bars. They believe stellar winds and flares are the culprit. Modeling atmospheric escape over time, they assess how an early atmosphere dissolves within a magma ocean during planet formation or photolyzes into hydrogen and oxygen because of the intense bombardment of X-rays and UV from flares.

Thus a thick atmosphere is ruled out by the data, while stellar winds could account for further erosion of a thin atmosphere, all leading to the conclusion that LHS 3844b is a bare rock unless a thin atmosphere is replenished over time. Should we assume that hot terrestrial planets orbiting well inside the habitable zone of M-dwarfs are all devoid of atmospheres? Perhaps, but these stars may still be of astrobiological interest:

The results presented here motivate similar studies for less-irradiated planets orbiting small stars. Cooler planets are less susceptible to atmospheric escape and erosion, and may provide a friendlier environment for the evolution of life. In coming years this hypothesis can be tested, thanks to the infrared wavelength coverage of the James Webb Space Telescope and the influx of planet detections expected from current and future surveys.

The paper is Kreidberg et al., “Absence of a thick atmosphere on the terrestrial exoplanet LHS 3844b,” Nature 19 August 2019 (abstract / preprint)