Europa Clipper Moves to Next Stage

Europa Clipper stays on my mind, with the intent of digging deeper into the spacecraft as development moves forward. We are talking about a craft that is by necessity radiation-tolerant as it will make a series of close flybys of Europa during its long orbit of Jupiter. 45 such flybys are in the cards, at altitudes varying from 2700 to 25 (!) kilometers, with flybys of Ganymede and Callisto in the mix as well. The latter are considered gravitational maneuvers intended to refine Europa Clipper’s orbit, and while they should be productive, they are not science priorities. 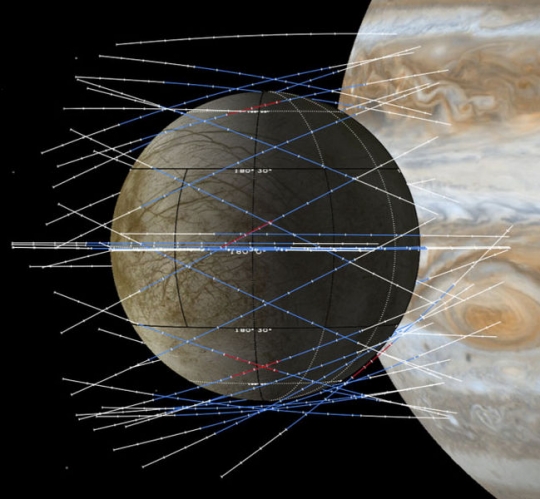 Image: Because Europa lies well within the harsh radiation fields surrounding Jupiter, even a radiation-hardened spacecraft in near orbit would be functional for just a few months. Studies by scientists from the Jet Propulsion Laboratory show that by performing several flybys with many months to return data, the Europa Clipper concept would enable a $2B mission to conduct the most crucial measurements of the cancelled $4.3B Jupiter Europa Orbiter concept. Here we see how the mission can achieve global coverage during successive flybys. Credit: NASA/JPL.

NASA has now announced confirmation of Europa Clipper’s next mission phase, which means we proceed to completion of the final design, which will in turn be followed by construction and testing of the spacecraft and its science payload. NASA associate administrator for the Science Mission Directorate Thomas Zurbuchen frames Europa Clipper within the sequence of outer system missions that most recently has included Cassini’s operations at Saturn:

“We are all excited about the decision that moves the Europa Clipper mission one key step closer to unlocking the mysteries of this ocean world. We are building upon the scientific insights received from the flagship Galileo and Cassini spacecraft and working to advance our understanding of our cosmic origin, and even life elsewhere.” 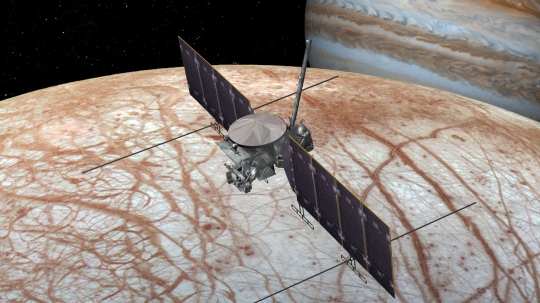 Image: This artist’s rendering shows NASA’s Europa Clipper spacecraft, which is being developed for a launch sometime in the 2020s. Credit: NASA/JPL.

As the concept evolves, we’ll see how closely it tracks the image above, in which the ice-penetrating radar antennae are attached to the solar arrays extending from the spacecraft. The magnetometer boom and round high-gain antenna are visible on the side of the spacecraft, with a remote-sensing palette housing the rest of the instrument payload on the left.

The instruments NASA has selected to study Europa include nine of the thirty-three originally proposed. As you would imagine, they include a thermal instrument that will search the surface for recent eruptions of warmer water even as other instruments look for tiny particles in the thin atmosphere around the moon. It was back in 2012 that Hubble data indicated water vapor above the south polar region, giving us the possibility of water plumes linked to the subsurface ocean. As at Enceladus, that would open sampling options without drilling through the ice.

Ice-penetrating radar will be used to determine the thickness of the ice shell while also looking for the kind of subsurface lakes found beneath Antarctica. The matter has been the subject of controversy for years and clearly determines what is and is not possible in terms of ocean sampling from the surface, although collection of materials near Europa’s chaos regions, where the surface has been deformed, may one day allow a lander to study frozen ocean brines.

Long linear cracks on the surface seem to be the result of tidal forces causing the ice shell to flex. The constant gravitational interaction with Jupiter could provide enough heat energy to enable chemical reactions in the interior that, through volcanoes or hydrothermal vents, recycle nutrient-rich water between the ocean and the rocky interior. How well Europa’s different layers move material between them may determine whether living organisms can flourish here.

Image: This view of the Conamara Chaos region on Jupiter’s moon Europa taken by NASA’s Galileo spacecraft shows an area where the icy surface has been broken into many separate plates that have moved laterally and rotated. These plates are surrounded by a topographically lower matrix. This matrix material may have been emplaced as water, slush, or warm flowing ice, which rose up from below the surface. One of the plates is seen as a flat, lineated area in the upper portion of the image. Below this plate, a tall twin-peaked mountain of ice rises from the matrix to a height of more than 250 meters. The matrix in this area appears to consist of a jumble of many different sized chunks of ice. Though the matrix may have consisted of a loose jumble of ice blocks while it was forming, the large fracture running vertically along the left side of the image shows that the matrix later became a hardened crust, and is frozen today. Credit: NASA/JPL.

Europa Clipper will also carry cameras and spectrometers to produce high-resolution images and map surface composition, along with a magnetometer to measure the moon’s magnetic field, offering insights into the depth and salinity of the ocean. NASA announced in March that it was going to replace the earlier magnetometer designed for the mission — Interior Characterization of Europa Using Magnetometry, or ICEMAG — with a less complex (read ‘expensive’) instrument. The current list of instruments can be accessed here.