Impacts seem to have run rampant in the early Solar System, to judge from what we keep uncovering as we survey today’s evidence. The Moon is widely considered to be the result of Earth’s impact with a Mars-class object, while Mercury’s big iron core may show what happens when a larger world is stripped of much of its mantle in another ‘big whack.’ Then there’s Uranus, spinning lopsidedly in the outer system.

We also know that impacts continue to make their mark. They’re shown up on Jupiter at a fairly brisk pace, with Shoemaker-Levy striking the gas giant in 1994, and another evident impact from an asteroid earlier this month, creating a definitive flash.

For that matter, we have a Hubble image from 2009 showing an impact, an expanding spot twice the length of the United States. That one was discovered by Australian amateur astronomer Anthony Wesley. Later observations allowed scientists to estimate the impactor’s diameter at 200 to 500 meters, with an explosion thousands of times more powerful than the Tunguska event in 1908. Juno mission scientist Ravit Helled (University of Zurich) jokes that when planetary scientists lack a solution, they tend to invoke a giant impact. If so, it seems to be an understandable assumption. 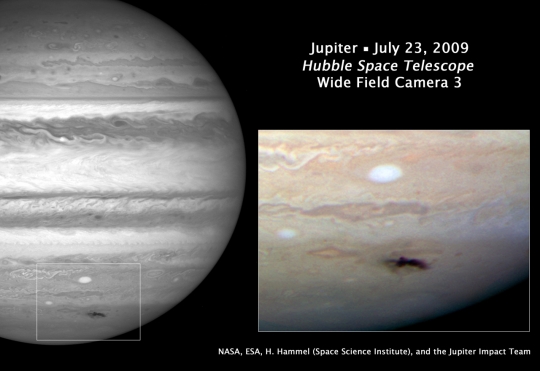 But Helled and colleagues in the National Centre of Competence in Research PlanetS (Bern, Switzerland) aren’t joking when it comes to results from Juno that are forcing them to change their views of Jupiter’s core. The gravity data demand explanation, which may emerge in a massive impact early in the history of Jupiter’s formation:

“Instead of a small compact core as we previously assumed, Jupiter’s core is ‘fuzzy,’” Helled explains. “This means that the core is likely not made of only rocks and ices but is also mixed with hydrogen and helium and there is a gradual transition as opposed to a sharp boundary between the core and the envelope.”

In a paper just published in Nature, Helled and an international team led by Shang-Fei Liu (Sun Yat-sen University in Zhuhai, China) present the results of simulated collisions between an early Jupiter and planetary embryos. They worked with software code developed by PhD student Simon Müller that probed planetary evolution. Particularly puzzling is the thermal evolution of the planet after the impact. Could the diluted core Juno found really persist for billions of years until today?

Giant impacts, the authors argue, are most likely to occur not long after runaway gas accretion. This is when the gravitational effects of the growing planet increase 30-fold in the space of a few million years, destabilizing the orbits of nearby embryos. The team’s simulations show that Jupiter’s gravitational effect on nearby planetary embryos would have been profound, with at least a 40 percent chance that a large embryo would hit Jupiter within the first few million years.

The scientists worked through tens of thousands of simulations to model this effect, and went on to use separate computer code to investigate what these impacts would do to Jupiter’s internal structure. To produce the diluted core we see today, heavy elements in the core and the embryo need to mix with the surrounding gas envelope.

Analyzing heat transport and heavy element mixing, the team finds that it would take an impactor with about 10 times Earth’s mass to stir Jupiter’s core, mixing denser layers with less dense layers above. The team’s 3D models show the effects of a major hit below.

Image: This is Figure 3 from the letter in Nature. Caption: Three-dimensional cutaway snapshots of density distributions during a merger event between a proto-Jupiter with a 10M⊕ rock/ice core and a 10M⊕ impactor. a, Just before the contact. b, The moment of core–impactor contact. c, 10 h after the merger. Owing to impact-induced turbulent mixing, the density of Jupiter’s core decreases by a factor of three after the merger, resulting in an extended diluted core… Credit: Shang-Fei Liu/Sun Yat-sen University.

The authors go on to compute the thermal evolution following the impact of a 10 Earth mass impactor until the present day, a span of 4.56 billion years. There is only one solution that produces a diluted core like that found by Juno. From the paper:

We conclude that Jupiter’s diluted-core structure could be explained by a giant impact event, but only under specific conditions including a head-on collision with a massive planetary embryo, a post-impact central temperature of about 30,000 K or an initial thermal structure created by the accretion shock during the runaway phase. Indeed, the hydrodynamic simulation suggests that most of the impact energy is not deposited in the deep interior, and therefore the central temperature is unlikely to increase substantially, supporting the diluted core solution.

Interestingly, such an impact would demand the collision be head-on, for grazing impacts would not produce the core-density profile that Juno has now measured. Even a grazing embryo of 10 Earth masses, in this scenario, would be disrupted while sinking to the center of the planet. Meanwhile, smaller impactors (1 Earth mass or less) disintegrate in the envelope of the gas giant before they ever reach its center.

How definitive is this impact solution? The paper points out in its conclusion that a gradual accretion of planetesimals along with runaway gas accretion could produce a disrupted core, but the authors question whether this would allow a diluted core to be preserved to the present day. They also note that giant impacts like the one they model here may be producing an observational signature in extrasolar gas giants, in the form of the high metallicity found in some of these worlds. And this is interesting:

Since impacts of planetary embryos are expected to be frequent after a gas giant’s runaway gas accretion phase, such an event with different impact conditions (such as a small impactor or an oblique collision) may have also happened to Saturn, and could in principle explain the differences between the internal structures of Jupiter and Saturn.