We usually talk about habitability in binary form — either a planet is habitable or it is not, defining the matter with a ‘habitable zone’ in which liquid water could exist on the surface. Earth is, of course, the gold standard, for we haven’t detected life on any other world.

But it is conceivable that there are planets where conditions are more clement than our own, as Stephanie Olson (University of Chicago) has recently pointed out. The work, presented at the just concluded Goldschmidt Geochemistry Congress in Barcelona, models circulatory patterns in oceans, some of which may support abundant life if they exist elsewhere. The emphasis here is not so much on surface ocean currents but upwelling water from deep below. Says Olson:

“We have used an ocean circulation model to identify which planets will have the most efficient upwelling and thus offer particularly hospitable oceans. We found that higher atmospheric density, slower rotation rates, and the presence of continents all yield higher upwelling rates. A further implication is that Earth might not be optimally habitable–and life elsewhere may enjoy a planet that is even more hospitable than our own.” 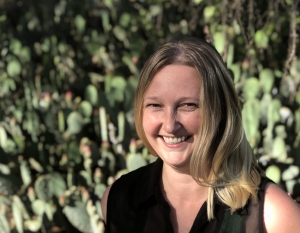 All this has implications for how we use the term ‘Earth-like,’ and reminds us to be careful, as Olson told a Los Angeles Times interviewer in 2018:

Stephanie Olson makes the case that life has to be far more common than what we can detect at our current stage of technology. An ecosystem beneath the surface of an icy moon may defeat our methods, as could microorganisms deep within a planet’s mantle. So what we need to do, in this scientist’s view, is build our target lists for future study around a subset of planets, those that meet the habitability demands of forms of life that are global, active and detectable. This also builds the list of those worlds for which a non-detection would be the most telling.

In general, our developing models for habitability have tracked our interest in finding atmospheric biosignatures, for we are closing in on the capability of doing this for small, rocky worlds circling nearby M-dwarf stars. The complexities of ocean dynamics have been left out of the picture other than when used as a mechanism for climate regulation or heat transport.

In her conference abstract at the Goldschmidt conference, Olson argues that the implications of circulatory patterns in oceans should be folded into the habitability question. Cycles of ocean upwelling driven by winds can recycle nutrients from the deep ocean back to shallower waters where they can play a role in stimulating photosynthesis. From the abstract:

Photosynthesis,,,provides energy in the form of chemical disequilibrium that sustains life more broadly on our planet. Ocean circulation is thus a first-order control on the productivity and distribution of life on Earth today and throughout our planet’s history. Moreover, ocean circulation patterns, sea ice coverage, and sea-to-air gas exchange kinetics modulate the extent to which biological activity within the ocean is communicated to the atmosphere. The chemical evolution of Earth’s atmosphere has ultimately been an imperfect reflection of the evolution of Earth’s marine biosphere owing to these oceanographic phenomena.

Olson’s tool for exploring ocean dynamics on a range of modeled, habitable exoplanets is a global circulation model (GCM) called ROCKE-3D. The software is designed to examine different periods in the evolution of terrestrial-class planets, with the goal of finding what kind of techniques might flag the presence of life in these environments. You can have a look at ROCKE-3D in action in this NASA page on the simulation of planetary climates. Different parameters can be selected on a form to create maps of a number of climate variables.

Below is an example of one of these maps, as created by the ROCKE-3D software. 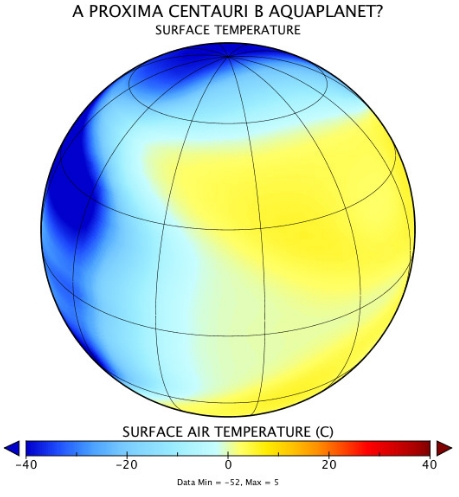 Image: The discovery of the planet Proxima Centauri b orbiting the star closest to Earth has generated much research about whether it has a chance to be habitable. With ROCKE-3D we have imagined Proxima Centauri b as an “aquaplanet” covered by water. Because the planet is close to its star, it may show the same face to the star all the time, as the Moon does to the Earth. If so, the dayside remains a few degrees above freezing (yellow colors). Elsewhere, the ocean is perpetually covered by ice (dark blue colors), except near the equator where winds and ocean currents push sea ice eastward onto the dayside where it breaks up and melts (pale blue to light yellow colors). Credit: NASA Nexus for Exoplanet System Science (NExSS) / NASA Goddard Institute for Space Studies (GISS).

Three-dimensional planetary general circulation models have been used to project climate change into future decades, but have matured to the point that they can probe habitability questions such as how a planet can become habitable under variations in stellar radiation and atmospheric chemistry. The NASA Nexus for Exoplanet System Science (NExSS) effort works on these matters in a cross-disciplinary effort to parse habitability in terms of the factors that make it happen, from host stars to protoplanetary disks and rocky planet atmospheres.

ROCKE-3D stands for Resolving Orbital and Climate Keys of Earth and Extraterrestrial Environments with Dynamics, now developing as a collaborative investigation within NExSS. At NASA GSFC, the Goddard Institute for Space Studies (GISS) developed ROCKE-3D to run global circulation model simulations deploying and manipulating past climates of Earth and other planets by way of analyzing climates and ocean habitats. The idea is to produce model spectra and phase curves for future observations. Let me quote from the GISS website:

Our project uses solar radiation patterns and planetary rotation rates from simulations of spin-orbit dynamical evolution of planets over Solar System history provided by our colleagues at the Columbia Astrobiology Center and at other institutions that are part of our NExSS team. In turn, the synthetic disk-integrated spectra we produce from the GCM will be used as input to a whole planetary system spectral model that emulates observations that candidate future direct imaging exoplanet missions might obtain…

Here you can see the direction of this work. What these teams are trying to do is model what future observatories may see when we become capable of directly imaging rocky exoplanets. We need to learn what kind of signals may be detectable as we allocate precious observing time to those targets most likely to repay the effort. Here theory about the kind of spectral details that life may produce is the foundation for later direct observational data.

Back to Olson, who wants to fold ocean dynamics into this effort and consider how they may be manifested on habitable exoplanets. Can features of ocean circulation that we cannot observe be inferred from atmospheric properties we can see? Olson’s work is an attempt to link ocean circulation with key planetary parameters, invoking the biological constraints differing ocean habitats may place on worlds around a variety of stars.

We can’t say how this work will develop, but there is the real prospect for the telescope design of future missions — think LUVOIR (Large UV/Optical/IR Surveyor) or HabEx (Habitable Exoplanet Observatory) — to be affected as we learn more about what we need to look for. Adds Olson:

“Our work has been aimed at identifying the exoplanet oceans which have the greatest capacity to host globally abundant and active life. Life in Earth’s oceans depends on upwelling (upward flow) which returns nutrients from the dark depths of the ocean to the sunlit portions of the ocean where photosynthetic life lives. More upwelling means more nutrient resupply, which means more biological activity. These are the conditions we need to look for on exoplanets.”

Immense effort is going into modeling planetary climate and evolution to guide our investigation of habitability. It will be fascinating to watch the trajectory of these studies as we begin to deploy advanced space-based resources to probe for biosignatures. My guess is that we will see early detections of potential biosignatures — these will receive huge press coverage — but we will not find anything that is unambiguous.

That may seem like a letdown when it happens, but ruling out abiotic mechanisms for possible biosignatures is equally a part of global circulation modeling, and this work will take time.

Next post: HR 5183 b: Pushing Radial Velocity Techniques Deeper into a Stellar System