A Major Step for the James Webb Space Telescope

The James Webb Space Telescope has been assembled for the first time, meaning its two halves — the spacecraft and the telescope — have been connected, following up earlier testing in which the two parts were temporarily connected by ground wiring. The latter took place almost a year ago, in September of 2018, allowing spacecraft and telescope test teams to begin working together as the process pointed to the physical connection that has now been achieved.

The connection was completed at Northrop Grumman’s facilities in Redondo Beach, California, with the telescope, its mirrors and science instruments, lifted by crane above the sunshield and spacecraft, which had already been combined. With the mechanical connection complete, the next step will be the electrical connection of the two halves and subsequent testng. 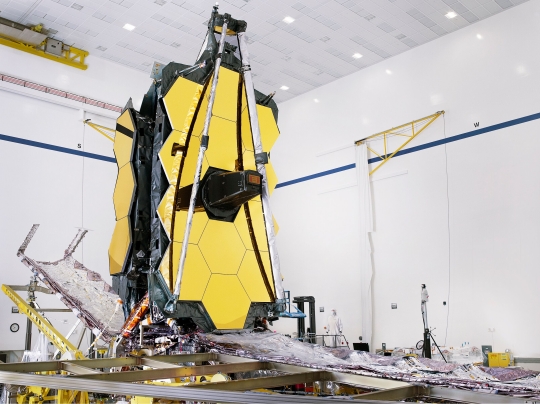 Image: The fully assembled James Webb Space Telescope with its sunshield and unitized pallet structures (UPSs) that fold up around the telescope for launch, are seen partially deployed to an open configuration to enable telescope installation. Credits: NASA/Chris Gunn.

“This is an exciting time to now see all Webb’s parts finally joined together into a single observatory for the very first time,” says Gregory Robinson, the Webb program director at NASA Headquarters in Washington, D.C. “The engineering team has accomplished a huge step forward and soon we will be able to see incredible new views of our amazing universe.”

The next round of testing includes full deployment of the JWST sunshield. Its critical role: To keep the observatory’s mirrors and scientific instruments cold to allow its infrared observations to achieve maximum resolution. The sunshield, layered in five sections, will have one side, facing the Sun, that can reach 383 Kelvin (110 degrees Celsius), while the other side has a modeled minimum temperature of 36 Kelvin, or -237 degrees Celsius. And it’s big, measuring 21.197 m x 14.162 m (this makes it about the size of a tennis court, a fact I throw in for those Centauri Dreams readers who enjoy sports comparisons in relation to space topics). 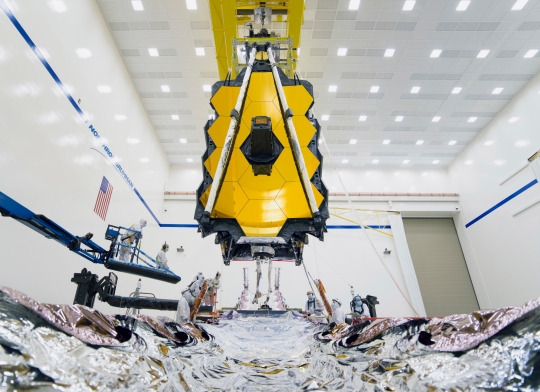 The sunshield should allow the telescope, once at the L2 Lagrangian point, to cool down below 50 Kelvin (-223 degrees Celsius) by simply radiating its heat into space. This will allow successful functioning of the near-infrared instruments, which include the Near Infrared Camera (NIRCam), the Near InfraRed Spectrograph (NIRSpec) and the Fine Guidance Sensor / Near Infrared Imager and Slitless Spectrograph (FGS/NIRISS) — all of these work at 39 K (-234°C). The Mid-Infrared Instrument (MIRI) will operate at 7 K (-266 degrees Celsius) using a cryocooler system. Thermal stability will allow proper alignment of the primary mirror segments. 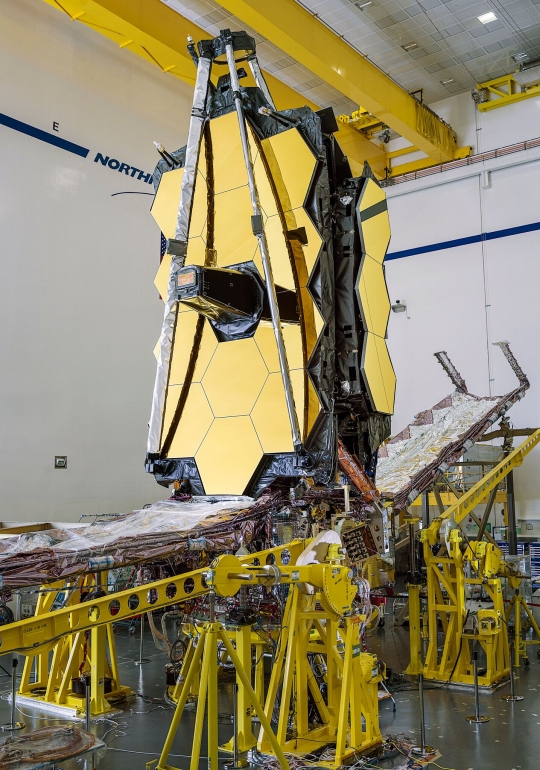 With launch scheduled for 2021, extensive environmental and deployment testing will now be undertaken for the fully assembled observatory. All of the telescope’s major components have gone through rounds of environmental tests including launch stress and vibration, but we now have to put the integrated assembly through its paces. As if launch wasn’t stressful enough, we’ll have to sweat out deployment of the sunshield and the 6.5-meter primary mirror, all destined for Earth-Sun L2, which is far beyond the orbit of the Moon. Plenty of suspense ahead as we tune-up for 2021. Getting this expensive bird in place is going to be a nail-biter.