Spectroscopic Evidence of a Possible Exomoon

It shouldn’t surprise us that first discoveries can be extreme. Consider that the first main sequence exoplanets we detected were ‘hot Jupiters.’ Nobody expected these (unless you discount John Barnes and Buzz Aldrin in Encounter with Tiber, and Greg Matloff, who advised them — see Probing Ultrahot Jupiters — but a radial velocity detection is rendered far more likely if a large planet is orbiting close to its star. And so we got 51 Pegasi b, and soon, others in the hot Jupiter category. Incidentally, the Barnes & Aldrin novel was finished though not published when the discovery of 51 Pegasi b was made in 1995. Nice prediction!

Hot Jupiters may not be all that common, but they show up in early radial velocity work. I could throw in the first exoplanets of another kind as well, these being planets around a pulsar. Who, as Isidor Rabi once said about muons, ordered that? Extreme objects that push hard enough on their environment to be flagged by our current instrumentation are of course what we will see first. We then start widening our capabilities and building our catalogs.

Now we have interesting work on a possible exomoon, a kind of Io (itself an extreme object, as witness the contortions of its surface) that seems to be shedding material at a fantastic rate. Remember, Io has more volcanic activity than any body in the Solar System, and thus an Io analog elsewhere might well do the same. But untangling this spectral signature’s import is no small matter, and the paper’s authors are forthright about sharing the uncertainties. 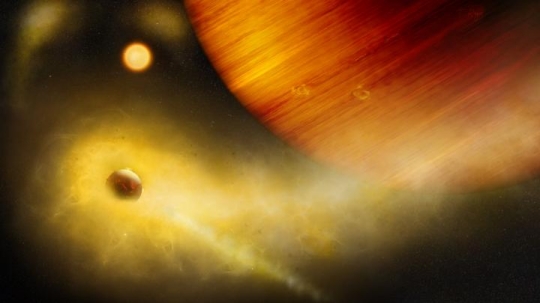 Image: Artist’s composition of a volcanic exo-Io undergoing extreme mass loss. The hidden exomoon is enshrouded in an irradiated gas cloud shining in bright orange-yellow, as would be seen with a sodium filter. Patches of sodium clouds are seen to trail the lunar orbit, possibly driven by the gas giant’s magnetosphere. Credit: © University of Bern, Illustration: Thibaut Roger.

The system in question is WASP-49, a G-class star about 555 light years out in the constellation Lepus near Orion, which is circled by the transiting gas giant planet WASP-49b in an orbit of less than three days at a distance of 0.0379 AU. The prospect of an exo-Io in turn orbiting this world has Apurva Oza, a postdoctoral fellow at the Physics University of Bern and associate of NCCR PlanetS, speaking of the place in apocalyptic, or at least cinematic, terms:

“It would be a dangerous volcanic world with a molten surface of lava, a lunar version of close-in Super Earths like 55 Cancri-e, a place where Jedis go to die, perilously familiar to Anakin Skywalker.”

Oza is lead author of the paper on this work, which is a study of sodium and tides. It’s also a tale of circumstantial evidence, so that we have to keep in mind that we have no discovery of an exomoon here, but rather hints that something unusual is happening in this system that an exomoon could explain. That something would be the effect of enormous tides that, if an exomoon exists around WASP-49b, would heat the moon to stress and reinforce its own volcanic activity, spewing sodium and potassium into space. Both sodium and potassium are useful because they create distinct spectral signatures, and sodium has been detected in the spectra of other exoplanets, but nowhere so far from the planet itself as at WASP-49.

In other words, we could be looking at a geologically active moon interacting with ambient plasma. If sodium is being drawn from an exomoon’s surface, we would expect it to contribute to a plasma torus, according to the authors, because volatiles are being fed into the magnetosphere of the gas giant. The paper uses the Jupiter/Io system as a benchmark to model the sodium torus, noting that about a dozen exoplanet systems show similar detections.

The authors use the term endogenic to describe processes that are intrinsic to the gas giant planet, while processes that are external — i.e., related to a moon or debris ring near the planet — are referred to as exogenic. Distinguishing between these sources is difficult, as the scientists acknowledge, but based on recent observations of sodium at Jupiter, the spectral signature of sodium shows a clear origin at Io. Thus the idea that a similar moon might contribute to the spectral signature at WASP-49b seems reasonable, and here, the sodium is far enough away from the planet to indicate an external source. From the paper:

A unique consequence of exomoons orbiting hot Jupiters is that they would be directly embedded in the hydrodynamically escaping endogenic medium rendering the distinction between the two difficult at present. However, the recent discovery of Na I at a remarkably high altitude RNa ∼ 1.5Rp for WASP 49-b (Wyttenbach et al. 2017) we discuss may be a strong indication of exogenic sodium [i.e., sodium drawn from the surface of a moon], although not unambiguous at present. Further testable predictions as we have described include non-solar Na/K ratios, and spectral shifts due to radiation pressure.

Thus we see sodium from both planet and possible exomoon, but the distance between the sodium signature and the planet gives credence to the idea that the primary source is a moon. The image below shows the concept. 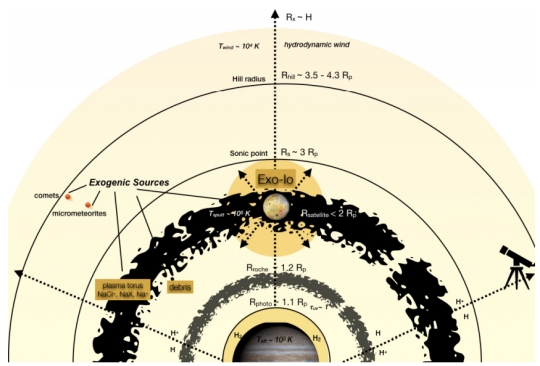 Image: This is Figure 4 from the paper. Partial caption: 2-D “Birds-Eye” Architecture of a Sodium Exosphere at a Close-in Gas Giant Exoplanet System. Endogenic: An extended sodium layer above the hot Jupiter is shown to illustrate a well-mixed Na I component (yellow). Exogenic: An exo-Io sodium cloud (yellow) is shown at ∼ 2Rp. Parameters for an escaping atmosphere are overlayed, inspired by the 1-D hot Jupiter atmosphere by Murray-Clay et al. (2009). Several other desorbing-exogenic sources (comets, micrometeorites, debris) illustrate the possible endogenic-exogenic interaction contributing to the light yellow exosphere. A full Monte Carlo simulation is likely necessary to describe the precise ion-neutral and electron-neutral interactions in detail, yet a upper atmosphere model by Huang et al. (2017) along with high-resolution observations of HD189733b (Wyttenbach et al. (2015)) and WASP 49-b (Wyttenbach et al. (2017)) are suggestive of the parameter space. Credit: Oza et al.

But is it likely that a moon could survive in this configuration, orbiting a hot Jupiter this close to its star? The authors concede the possibility that we are looking at the remnants of a disintegrated moon, but add that we can’t discount a stable orbit here:

Survival of an exo-Io should,,,be considered in tandem with its mass loss, as orbital stability dependent on semimajor axis is a necessary yet insufficient condition. Although the stellar proximity and insolation is threatening for the above systems, we find that, for the majority of systems, the stellar tides not only force the exo-Io to remain in orbit, but also drive significant tidal heating within the satellite, roughly 5 orders of magnitude higher than Io.

Thus if Io’s escaping sodium can dominate Jupiter’s own emission of sodium, the possibility that the WASP-49b detection is the signature of an exomoon cannot be ruled out. The authors make the interesting point that the physical processes they describe in this paper can expand material to the edge of the magnetosphere in a gas giant system, which means that we need to consider exoplanets in a larger context, as part of an exoplanetary system that may include moons. And while we have no clear detection of such a moon here, we have intriguing hints of the possibility, and a research direction that includes the effects of nearby objects in these environments.

Next post: Looking for Lurkers: A New Way to do SETI