Our thinking on how planetary systems form includes the accretion of rocky bodies within a disk surrounding a young star, and we’re examining such disks in numerous systems, such as the well studied Beta Pictoris. But the idea of accretion leaves many issues unsettled, such as what happens when large rocky bodies collide in the violent endgame of system formation. The Earth evidently underwent such a collision, with our own Moon being the tangible result.

Caltech postdoc Simon Lock has been working with Sarah Stewart (UC-Davis) to study how such giant impacts unfold, running simulations of early planetary materials whose collisions can form bodies with masses between 0.9 and 1.1 Earth masses. The energy involved in such impacts is thought to allow, in some cases, the two colliding bodies to form a ‘synestia,’ or a rotating torus of planetary materials that will later cool into one or more spherical planets.

The synestia is, however, but one outcome out of many produced by these simulations. What the researchers found is that when a major collision occurs, the internal pressure of the resulting objects is much lower than we would expect. Lock explains how the computer modeling changes earlier thinking about pressure within a young planet:

“Previous studies have incorrectly assumed that a planet’s internal pressure is simply a function of the mass of the planet, and so it increases continuously as the planet grows. What we’ve shown is that the pressure can temporarily change after a major impact, followed by a longer term increase in pressure as the post-impact body recovers. This finding has major implications for the planet’s chemical structure and subsequent evolution.” 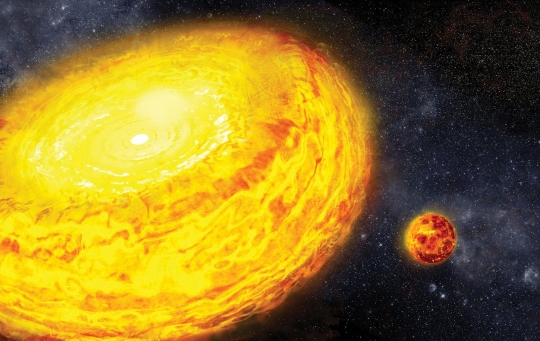 Image: Artist’s depiction of a synestia, a rotating donut of planetary material that can result from the collision of two planetary bodies. In time, the synestia cools back into one or more spherical planetary bodies. Credit: Ron Miller/Scientific American.

Lock and Stewart’s modeling indicates that the lower post-impact pressure is the result of rapid rotation induced by the collision, which could push material away from the object’s spin axis. Moreover, the now partially vaporized object is hot and its density is correspondingly reduced.

Modeling like this is important in the study of early stellar systems because we have no observational data as yet on how Earth-class planets grow, and according to this work, the physical properties of a planet as shaped by collisions are highly variable. Lower internal pressure (and the pressure inside the Earth not long after the impact that formed the Moon was, the researchers believe, half that of present-day Earth) could help us tie together geochemical analysis of the Earth’s mantle with the collision model of planet formation now current.

The paper argues that the internal pressure of a planet like ours helps to determine the chemical composition of the mantle. Objects colliding with the early Earth would have delivered metals into the mantle which, along with other elements already there, would sink to the core. By studying the amount of elements dissolved into the metal, we can determine Earth’s internal pressure at the time. Thus today’s mantle is a window into the mantle pressure at play during the planet’s formation.

The contradiction has been that studies of the metal content of the mantle show the pressure during formation would have been the same as found in the middle of the mantle today. But our models of giant impacts show that most of the mantle should melt, thus producing much higher pressure, equivalent to that found near the core. The researchers resolve the problem by showing that the pressure would be lower after these impacts, rising as the planet recovers. Evidence in the mantle should show how it solidified and how the earliest planetary crust formed. As the paper notes, this is an area that has been little explored before now:

…we show that cooling and tidal evolution of satellites after giant impacts can lead to increases in pressure. Pressure increases in the lower mantle could lead to partial melting. Pressure-induced melting provides a new mechanism for the creation of chemical heterogeneity early in Earth’s history and could explain the existence of seismologically anomalous regions in the present-day lower mantle. Pressure-induced phase transitions during the recovery of a body after a giant impact are a previously unrecognized phenomenon in planet formation.

So we have a new model, one that examines the changing nature of internal pressure in planetary bodies late in the planet-formation process. The lower average pressures that Lock and Stewart find help to explain the concentrations of elements between the core and mantle and reconcile them with the melting expected after giant impacts. The way thus opens to test various Moon formation scenarios using geochemical and geophysical observations of today’s Earth because how the mantle solidifies varies depending on the kind of impact. Adds Lock:

“We have shown that the pressures in planets can increase dramatically as a planet recovers, but what effect does that have on how the mantle solidifies or how Earth’s first crust formed? This is a whole new area that has yet to be explored.”

Next post: A New Explanation for Lakes on Titan