A New Explanation for Lakes on Titan

The vast amount of data returned to Earth from the Cassini mission continues to pay off with new research angles, a process that will continue for years to come. Today we learn of a possible explanation for an odd feature of some methane-filled lakes on Saturn’s moon Titan. As viewed in Cassini radar data, we can see what appear to be sharp ridges, along with cratered edges, raised rims and ramparts. Interestingly, some of the steeper ridges are considerably higher than Titan’s liquid sea level. Winnipeg Lacus, a small lake near Titan’s north pole, is but one example.

The model currently in play about Titan’s lakes is that liquid methane dissolved a bedrock of ice and solid organic compounds — essentially creating the reservoirs which it then fills. The process is similar to karstic lakes found on Earth as the result of bodies of water dissolving surrounding limestone, dolomite or gypsum, with distinctive sinkholes and caves.

But an international team of researchers headed by Giuseppe Mitri of Italy’s d’Annunzio University now offers an alternative. In this scenario, changes in temperature over the aeons on Titan could cause pockets of liquid nitrogen below the surface to become a pressurized, explosive gas, blowing out the craters which later warming events would fill with methane.

This process accounts for features that the karstic lake basin theory fails to address. Jonathan Lunine (Cornell University) is a co-author of the paper on this work:

“You either need gas that ignites explosively or a gas that builds up enough pressure so that it just pops like a cork from a champagne bottle. On Titan, there is nothing that will create a fiery explosion because that moon has no free oxygen,” says Lunine. “Thus, a pressurized explosion model, we argue, is a better model for those kinds of lakes. Craters are created and they fill with liquid methane.” 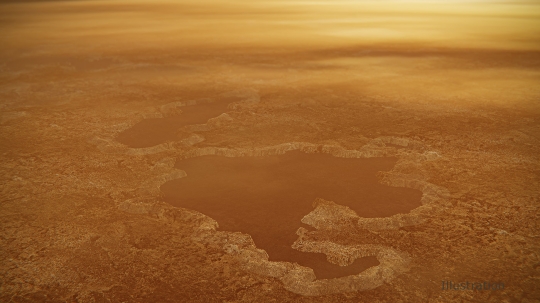 Image: This artist’s concept of a lake at the north pole of Saturn’s moon Titan illustrates raised rims and rampart-like features such as those seen by NASA’s Cassini spacecraft around the moon’s Winnipeg Lacus. New research using Cassini radar data and modeling proposes that lake basins like these are likely explosion craters, which could have formed when liquid molecular nitrogen deposits within the crust warmed and quickly turned to vapor, blowing holes in the moon’s crust. This would have happened during a warming event (or events) that occurred in a colder, nitrogen-dominated period in Titan’s past. The new research may provide evidence of these cold periods in Titan’s past, followed by a relative warming to conditions like those of today. Although Titan is frigid compared to Earth, methane in the atmosphere provides a greenhouse effect that warms the moon’s surface. Credit: NASA/JPL-Caltech.

To make the effect work, we have to consider the interplay between nitrogen and methane, for the geophysical history of Titan, the researchers believe, includes eras when methane is depleted, with nitrogen as the primary constituent of a much colder atmosphere. Cooling nitrogen would produce liquid rain which could collect in pockets beneath the moon’s crust. The catalyst for explosion could well be geologic heating. The craters thus produced would later be filled with methane. Lunine likens the process to what Voyager II saw at Neptune’s large moon Triton.

“We saw these big deposits of nitrogen with streaks of black that looked like cigarette burns on the nitrogen ice. It was dust under the nitrogen being heated by the sun, allowing the nitrogen to explode outward.”

Are we then, seeing a Titan today that is in a much warmer phase than the frigid moon of earlier times in its evolution? Methane has acted as a greenhouse gas on this moon for perhaps as long as a billion years, but the model advocated here is that Titan has gone through cycles of heating and cooling, with methane first depleted and then resupplied. Thus steep edges and raised rims would speak to an epoch when liquid nitrogen was plentiful on the surface.

The key question, then, is how far we can take this hypothesis of climate change on Titan. Here is a snip from the paper addressing the matter:

The photochemical lifetime of methane in Titan’s atmosphere is several tens of million years, and the value of 12C/13C in Titan’s atmosphere indicates that the current atmospheric inventory of methane probably outgassed ~107–108 yr ago. Evolution models suggest that Titan’s crust is composed of water ice and clathrate hydrate, with mostly methane as primary guest species, and that episodic methane outgassing could be a cause for the continued presence of methane in the atmosphere. However, in the absence of continuous or frequent outgassing from the crust or deeper methane sources, Titan’s atmosphere in the past may have been episodically methane depleted [italics mine]. Under such conditions, the greenhouse effect would have been limited to the collision-induced absorption of N2–N2, resulting in a Titan that was colder than at present, with a mean surface temperature lower than 81 K…

The supposition that infrequent methane outgassing events would have allowed intervals between them when the surface was pocked with liquid nitrogen lakes, along with crustal aquifers of nitrogen in the polar regions, is thus key. We would, then, wind up with a stable nitrogen cycle at lower temperatures that parallels the methane cycle we see on Titan today. Small temperature variations could then produce the explosions presumed to create the lake beds that show up in Cassini’s data.

The authors make the case that if the lakes we see today are the result of explosive eruptions, then this itself is evidence of a cold nitrogen-dominated epoch followed by subsequent rewarming. A 2 K increase in Titan’s temperature between 1989 and 1998 along with an increase in atmospheric pressure may have been the result of rising nitrogen levels:

On Triton, the venting of nitrogen and possibly methane and an increase of atmospheric pressure are probably due to warming events that may mirror processes that happened in Titan’s nitrogen-dominated past.