Spreading scientific investigation beyond the research lab and astronomical observatory is what citizen science is all about. As we saw yesterday, projects like ExoClock are enlisting amateur volunteers to time exoplanet transits in support of the upcoming ARIEL mission. Also among such projects discussed at the ongoing EPSC-DPS joint meeting in Geneva is the eVscope digital telescope, a crowd-sourced effort from Unistellar that raised more than $3 million in its development under the direction of co-founder Franck Marchis (SETI Institute).

Here again we have a useful mission tie-in. The eVscope is designed to be a compact digital instrument that can be folded into what will become an extensive network of connected telescopes. The SETI Institute recently signed an agreement with Unistellar, which Marchis now serves as chief scientific officer, to make citizen astronomy a full-fledged effort that can contribute to the Lucy mission, which will launch in 2027 to the Jupiter Trojan asteroids.

One of the six asteroids targeted is Orus, but for each, learning the shape and precise size of the asteroid will increase the science return while helping mission engineers tune the exploration schedule. I mention Orus because we know so little about it — its shape is only vaguely known, and we have no knowledge of possible satellites. Thus it’s exciting news that the eVscope was used this month to observe an occultation of Orus for the first time.

Video: The Orus asteroid occulting a star, in the middle of the screen. Credit: F Marchis/Unistellar/SETI Institute.

The Unistellar team flew to Oman to make the observation, which involved the occultation of a magnitude 11 star. You’ll recall how this works from the extensive campaign to study Ultima Thule through occultations while the New Horizons spacecraft was on its long approach to the Kuiper Belt object. The occultation data proved strikingly accurate, as we would see when New Horizons flew past Ultima Thule, and the Orus occultation likewise generated a light curve that should help scientists refine its position and make a better assessment of its size.

“This is the first time an Orus occultation has been observed,” said Marchis. “We were in the right spot, and everything worked perfectly. One station located near Khalil, Oman detected and recorded this occultation while the other one only 30 km away did not see anything. In the future, it will be as simple as pushing a button on the Unistellar eVscope’s app for users to participate in these campaigns.”

Marchis presented the work at EPSC-DPS 2019 on September 16 in a session on citizen science, describing all the factors that go into making an occultation observation possible. In the case of Orus, the effort involved data from ESA’s Gaia space telescope, along with robotic telescopes on the ground as well as the PanSTARRS facility at Haleakala Observatory, Hawaii. Another occultation of Orus should be visible in Australia in November of this year, one of a series of observations within the next few years that will reveal Orus’ shape and rotation.

To support the Lucy mission, the plan is to utilize more than 2,500 connected eVscope instruments worldwide, telescopes that are shipping right now. Lucy is scheduled for launch in October of 2021 to study the Trojans, which orbit at the L4 and L5 Lagrange points 60° ahead and behind Jupiter. These are primitive objects that should contribute to our understanding of the history and development of the Solar System.

More than 6,000 Trojans have been identified in a mix of types (D-, C- and P-type) that Lucy will study as it moves into both clusters of Trojans. While C-type asteroids are primarily found in the outer regions of the Main Belt, the darker P- and D-type objects have similarities to Kuiper Belt objects beyond the orbit of Neptune. Evidently abundant in dark carbon compounds, all are thought to be rich in volatiles. 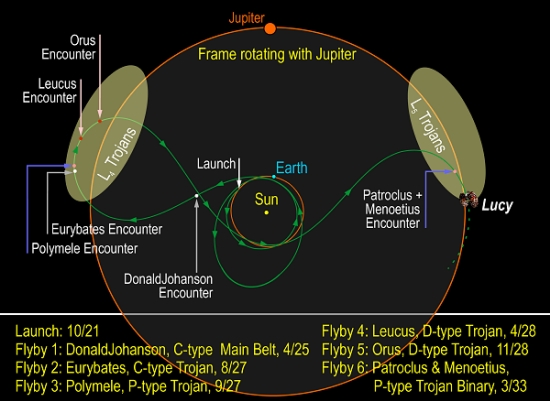 Image: This diagram illustrates Lucy’s orbital path. The spacecraft’s path (green) is shown in a frame of reference where Jupiter remains stationary, giving the trajectory its pretzel-like shape. After launch in October 2021, Lucy has two close Earth flybys before encountering its Trojan targets. In the L4 cloud Lucy will fly by (3548) Eurybates (white), (15094) Polymele (pink), (11351) Leucus (red), and (21900) Orus (red) from 2027-2028. After diving past Earth again Lucy will visit the L5 cloud and encounter the (617) Patroclus-Menoetius binary (pink) in 2033. As a bonus, in 2025 on the way to the L4, Lucy flies by a small Main Belt asteroid, (52246) Donaldjohanson (white), named for the discoverer of the Lucy fossil. After flying by the Patroclus-Menoetius binary in 2033, Lucy will continue cycling between the two Trojan clouds every six years. Credits: Southwest Research Institute.

“Calculations based previous to our observations from Oman give a diameter of about 54.8 kilometres for Orus, which is in line with estimations,” adds Marchis. “We don’t yet know much about Orus, such as its shape and whether it possesses one or several satellites. The observation has proved that our predictions of the orbit of Orus are accurate and we can now plan a campaign to make multiple occultation observations.”

Lucy should reach its first targets, the L4 trojans, in 2025, followed by a return to Earth and gravity assist there to move on to the L5 trojan cluster in 2033. Unlike the Dawn mission to Vesta and Ceres, Lucy will use chemical propulsion with gravitational assists, drawing on solar panels for power. The mission will give us a window to study not just the conditions of the Trojans’ formation but also their dynamical evolution into the orbits we see today.