In his wonderful account of the rocket that never was (Project Orion: The True Story of the Atomic Spaceship, 2002), George Dyson discusses his father’s thoughts on taking the craft to the moons of Saturn. Freeman Dyson and other Orion colleagues wanted to land on a moon to pick up propellant, but thought the moons of Jupiter were trickier than Saturn’s because of the depth of the Jovian gravity well. Anyway, Enceladus was a kind of beacon, and it was there Dyson fixed his attention. George Dyson quotes Freeman on the matter:

“We knew very little about the satellites in those days. Enceladus looked particularly good. It was known to have a density of .618, so it clearly had to be made of ice plus hydrocarbons, really light things; which were what you need both for biology and for propellant, so you could imagine growing your vegetables there. Five-one-thousandths g on Enceladus is a very gentle gravity, just enough so that you won’t jump off.”

As George noted, Enceladus was a long way from La Jolla, CA (where General Atomic had moved in 1958 to a 300-acre facility above the beaches near Torrey Pines), some 9 astronomical units, but the views would be spectacular. Imagine standing on Enceladus, where Saturn would appear vastly larger than Earth’s moon appears to us. Planet and rings would fill the sky, “changing phase from hour to hour, illuminated by the pale light of a distant sun.” 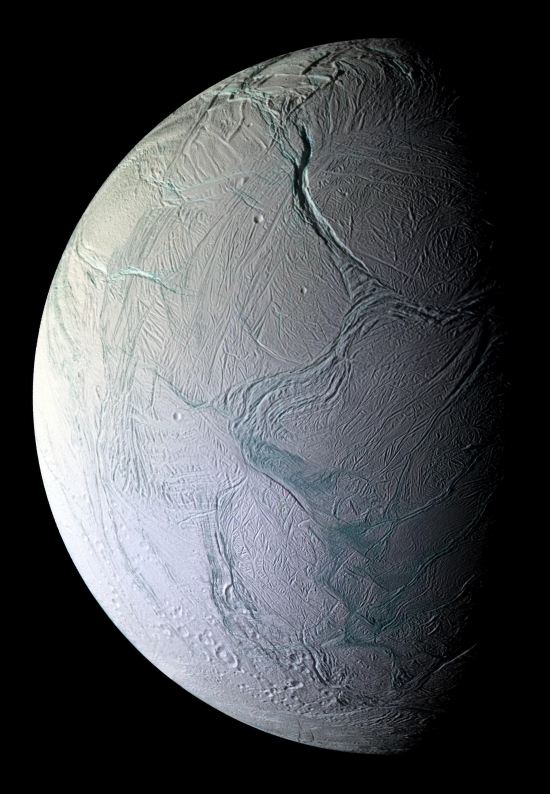 Image: Mosaic of the surface of Enceladus captured by Cassini on 9th October 2008 from an altitude of 25 kilometres. Credit: NASA/JPL/Space Science Institute.

We now know just how prescient Freeman Dyson was about the virtues of Enceladus, armed with Cassini data about geysers and an internal ocean. I always keep an eye on further insights from Cassini about this intriguing moon, and notice that at the EPSC-DPS joint meeting in Geneva this week, a team of researchers under Alice Le Gall (LATMOS-UVSQ, Paris) has analyzed some 60 radar observations of Saturn’s inner moons taken by Cassini. The result: Previous reports from these data underestimated their radar brightness by a factor of two.

All of Saturn’s inner moons show high radar reflectivity, with Enceladus itself being twice as bright as Europa, which is the brightest of Jupiter’s satellites. Significant variation turns up among the moons of Saturn, with Enceladus having the highest radar albedo, Titan the lowest.

Image: This is Figure 1 from the precis of Dr. Le Gall’s presentation. Caption: Averaged 2.2-cm disk-integrated radar albedos of Saturn’s major satellites. The error bars show the dispersion of the dataset for each satellite. Credit: Alice Le Gall.

What we’re witnessing among these inner moons is a fascinating interplay of material being pumped from the internal ocean of Enceladus into nearby space, affecting Tethys and Mimas. These three moons also interact with Saturn’s E-ring, which delivers water ice to their surfaces. The dazzling reflectivity that attracted the Orion team is largely the result of fresh water-ice particles from Enceladus, which acts as what Dr. Le Gall calls a ‘snow-cannon’ to coat all three surfaces. In other words, it snows on these worlds, in the sense that the particles fall back onto Enceladus and precipitate onto the surfaces of the other moons as well. Says Le Gall:

“The super-bright radar signals that we observe require a snow cover that is at least a few tens of centimetres thick. However, the composition alone cannot explain the extremely bright levels recorded. Radar waves can penetrate transparent ice down to [a] few meters and therefore have more opportunities to bounce off buried structures. The sub-surfaces of Saturn’s inner moons must contain highly efficient retro-reflectors that preferentially backscatter radar waves towards their source.”

Just what these ‘structures’ are is not known, though radar observations of Enceladus have shown subsurface features including pinnacles and ice blocks, along with fractured terrain. Le Gall’s team has developed models to test what specific shapes can act as effective reflectors, also testing whether enhanced reflection is a matter of random scattering events. This is a work in progress:

“So far, we don’t have a definitive answer,” adds Le Gall. “However, understanding these radar measurements better will give us a clearer picture of the evolution of these moons and their interaction with Saturn’s unique ring environment. This work could also be useful for future missions to land on the moons.”