An Unusual Gas Giant in a Red Dwarf System

The gas giant GJ 3512 b does not particularly stand out at first glance. About 30 light years from the Sun, it orbits its host star in 204 days, discovered by radial velocity methods by the CARMENES collaboration, which is all about finding planets around small stars. But look more deeply and you discover what makes this find provocative. GJ 3512 b turns out to be a gas giant with about half the mass of Jupiter, and small red dwarfs like this one aren’t supposed to host such worlds.

In fact, GJ 3512 b is at least an order of magnitude more massive than what we would expect from current theoretical models, making it an interesting test case for planet formation. Core accretion models assume the gradual agglomeration of material in a circumstellar disk, with small bodies banging into each other and growing over time until their gravity is sufficient to draw in an atmosphere from the surrounding gas. This gas giant defies the model, evidently having formed directly from the disk through gravitational collapse. 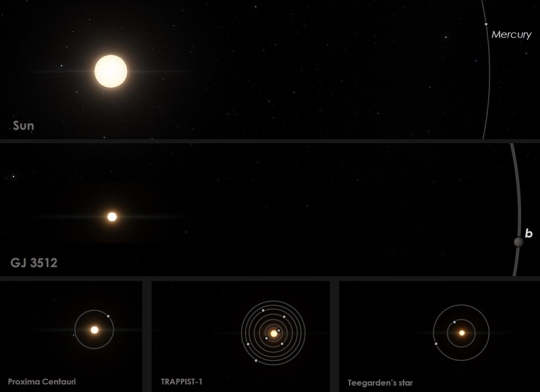 Image: Comparison of GJ 3512 to the Solar System and other nearby red-dwarf planetary systems. Planets around solar-mass stars can grow until they start accreting gas and become giant planets such as Jupiter, in a few millions of years. However, up to now astronomers suspected that, except for some rare exceptions like GJ 876, small stars such as Proxima, TRAPPIST-1, Teegardern’s star, and GJ 3512 were not able to form Jupiter mass planets. Credit: Guillem Anglada-Escude – IEEC/Science Wave, using SpaceEngine.org (Creative Commons Attribution 4.0 International; CC BY 4.0).

As for the host star, GJ 3512 has about 12 percent the mass of the Sun. The disks of gas and dust that surround such low mass stars are assumed to contain insufficient material to form planets like this. Consider: The Sun is 1050 times heavier than Jupiter, while the mass ratio between GJ 3512 and GJ 3512 b is 270. A much more massive debris disk would be needed to build this planet the conventional way, but if a disk of more than a tenth of the stellar mass is present, the star’s gravity cannot keep the disk stable. Gravitational collapse can then occur, as in star formation, but no disks this massive have been found around young red dwarf stars. Is this new exoplanet evidence that such disks can indeed form and be productive?

Things get even trickier when we consider other planets in the same system. At least one other planet is thought to exist, and the elliptical orbit of GJ 3512 b offers evidence for the gravitational effect of a possible third planet just as massive, one that may have been ejected. So now we have a small red star that would have needed to produce multiple massive planets, taking us well beyond current models. In a paper on this work from researchers at the Max Planck Institute for Astronomy, the University of Lund in Sweden and the University of Bern, the authors argue for gravitational disk collapse as the only viable method of formation.

“Until now, the only planets whose formation was compatible with disk instabilities were a handful of young, hot and very massive planets far away from their host stars,” says Hubert Klahr, who heads a working group on the theory of planet formation at the MPIA. “With GJ 3512 b, we now have an extraordinary candidate for a planet that could have emerged from the instability of a disk around a star with very little mass. This find prompts us to review our models.” 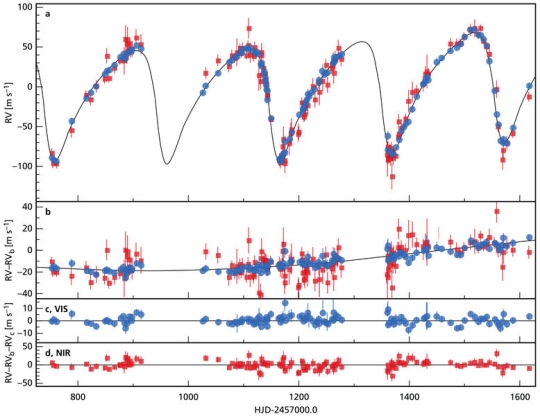 Image: Visualisation of the radial velocity (RV) measurement time-series and residuals obtained with CARMENES. Panel a illustrates how the RV of GJ 3512 (vertical axis) changes with time indicated in days since 8 December 2014, 12:00 p.m. UT (Universal Time, horizontal axis). HJD stands for Heliocentric Julian Day. Both the visual (blue symbols) and the infrared (red symbols) channels agree well. The black solid curve is the best orbital fit to the data. After subtracting the contribution of GJ 3512 b, panel b shows the residual, which indicates the presence of a long-term period hinting to a second planet. Panels c and d depict the residuals of the best overall orbital fit for the two CARMENES channels. Credit: Morales et al. (2019)/MPIA.

The estimated masses of the fragments formed are less than that of Jupiter, consistent with the mass of GJ 3512 b. Except for unrealistically low values of a [disk viscosity], fragmentation of the disk occurs at radii of ≳10 au, so the planets must have migrated a substantial distance from their formation locations to their present positions. This is possible given the large mass of the disk with respect to the planet, and is often seen in numerical simulations of disk fragmentation. For realistic viscosity a > 0.01, disk fragmentation typically occurs at radii of a few tens of au, and the total disk mass within this radius is ~30 MJ. Disks cannot extend too far beyond this fragmentation radius, because the total disk mass would become extremely large (up to 1 M⊙ within 100 au). Thus, the planetary system around GJ 3512 favors the gravitational instability scenario as the formation channel for giant planets around very-low-mass stars.

If you’re looking for a comparison, consider TRAPPIST-1, a star with many of the characteristics of GJ 3512. Here we have seven planets with masses equal to or less than the mass of the Earth, and the ‘bottom up’ accretion model fits with observation. But GJ 3512 b all but forces us to look at models where the planet forms directly from gravitational collapse in the disk. We’d still like to know why GJ 3512 b hasn’t migrated closer to its star, an indication that the mysteries of this system may prove fodder for a great deal of future analysis.

Next post: Alan Boss: The Gas Giants We Have Yet to Find