Alan Boss: The Gas Giants We Have Yet to Find

The news of a gas giant of half Jupiter’s mass around a small red dwarf, GJ 3512 b, continues to resonate. It goes to what has become a well enshrined controversy among those who follow planet formation models. While core accretion is widely accepted as a way of building planets, gravitational instability has remained an option. We are not talking about replacing one model with another, but rather saying that there may be various roads to planet formation among the gas giants. In any case, GJ 3512 b makes a strong case that we have much to learn.

When I think about gravitational instability, I go back to the work of Alan Boss (Carnegie Institution for Science), as he has long investigated the concept. I learned about it from his papers and his subsequent book The Crowded Universe (Basic Books, 2009). Here’s how Boss describes it there:

Proponents of the top-down mechanism… envision clumps of gas and dust forming directly out of the planet-forming disk as a result of the self-gravity of the disk gas. The clumps would result from the intersections of random waves sloshing around the disk, waves that look much like the arms in spiral galaxies such as the Milky Way. When two spiral arms pass through each other, they momentarily merge to form a wave with their combined heights, just as waves do on the surface of an ocean. Such a rogue wave might rapidly lead to the formation of a clump massive enough to be self-gravitating, and so hold itself together against the forces trying to pull it apart. Once such a self-gravitating clump forms, the dust grains within the clumps settle down to the center of the protoplanet and form a core…

What emerges, then, is a solid core with gaseous envelope. In other words, this ‘disk instability’ model produces a planet that has the same structure as one derived from core accretion. What makes GJ 3512 b so interesting is that its position around a star as small as its host is hard to explain without a truly massive disk, and if that disk were to form, it would be unstable, and the gravitational instability model could come into play. The creator of this model, by the way, is Alastair Cameron (Harvard University), who spawned the notion in 1972. Other key players were Gerard Kuiper and Soviet scientist Victor Safronov, though it was Boss who revived the idea in 1997 and began developing computer models showing how it could occur. 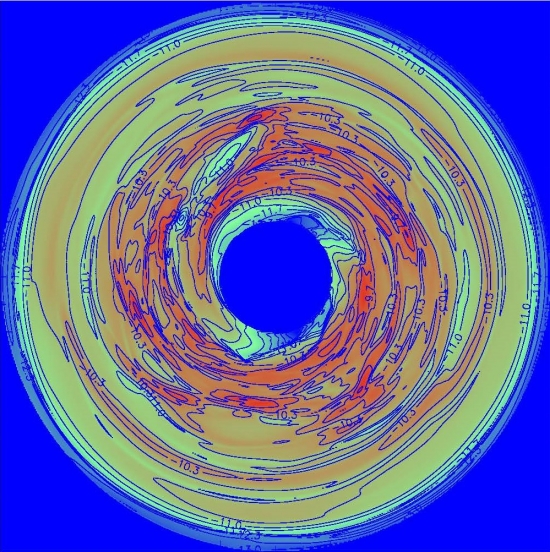 Image: Simulation of the disk of gas and dust surrounding a young star. Credit: Alan Boss.

So what does Boss think of GJ 3512 b? As you might guess, he’s energized by the result:

My new models show that disk instability can form dense clumps at distances similar to those of the Solar System’s giant planets. The exoplanet census is still very much underway, and this work suggests that there are many more gas giants out there waiting to be counted.”

The work he is referring to is a new paper in press at The Astrophysical Journal that suggests there is a likelihood that gas giants in Jupiter-like orbits may be plentiful, with the inherent biases built into our observational techniques making them hard to find. As for how many of these may be formed from disk instability, Boss is computing various protoplanetary disk models to continue the investigation. As he notes in the new paper:

These models are intended to be first steps toward creating a hybrid model for exoplanet population synthesis, where a combination of core accretion and disk instability works in tandem to try to reproduce the exoplanet demographics emerging from numerous large surveys using ground-based Doppler spectroscopy and gravitational microlensing or space-based transit photometry (e.g., Kepler, TESS). 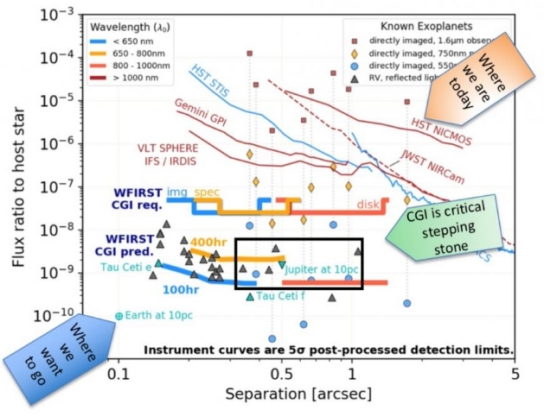 Image: The black box encapsulating Jupiter denotes the approximate region of exoplanet discovery space where Alan Boss’ new models of gas giant planet formation suggest significant numbers of exoplanets remain to be found by direct imaging surveys of nearby stars. NASA’s WFIRST mission, slated for launch in 2025, will test the technology for a coronagraph (CGI) that would be capable of detecting these putative exoplanets. Top Right: This simulation of the disk of gas and dust surrounding a young star shows dense clumps forming in the material. According to the proposed disk instability method of planet formation, they will contract and coalesce into a baby gas giant planet. Credit: Alan Boss.

We’re slowly eking out planets in wider orbits that are tricky for radial velocity, where their signals are more difficult to tease out than large planets close to their star, and also for transit work, because the transits would occur over an orbital period of five years or more. Boss continues to champion the concept that one size may not fit all when it comes to planet formation, with GJ 3512 b a striking case in point. Given a sufficiently massive protoplanetary disk, giant planets form in his models within 20 AU. Another targeted investigation for WFIRST will come out of all this when the mission launches some time in the next decade.

The paper is Boss, “The Effect of the Approach to Gas Disk Gravitational Instability on the Rapid Formation of Gas Giant Planets,” in press at The Astrophysical Journal (preprint).