While I’m working on the project I discussed the other day, I’m trying to keep my hand in with the occasional article here, looking forward to when I can get back to a more regular schedule. Things are going to remain sporadic for a bit longer this month, and then again in mid-November, but I’ll do my best to follow events and report in when I can. I did want to take the opportunity to use an all too brief break to get to the Enceladus news, which has been receiving attention from the space media and, to an extent, the more general outlets.

We always track Enceladus news with interest given those remarkable geysers associated with its south pole, and now we return to the Cassini data pool, which should be producing robust research papers for many years. In this case, Nozair Khawaja (University of Berlin) and colleagues have tapped data from the spacecraft’s Cosmic Dust Analyzer (CDA) to study the ice grains Enceladus emits into Saturn’s E ring, finding nitrogen- and oxygen-bearing compounds. These are similar to compounds found on Earth that can produce amino acids. Says Khawaja:

“If the conditions are right, these molecules coming from the deep ocean of Enceladus could be on the same reaction pathway as we see here on Earth. We don’t yet know if amino acids are needed for life beyond Earth, but finding the molecules that form amino acids is an important piece of the puzzle.” 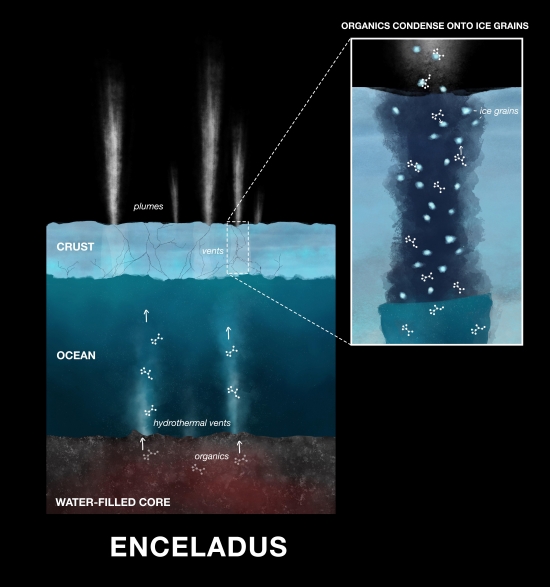 Image: This illustration shows how newly discovered organic compounds — the ingredients of amino acids — were detected by NASA’s Cassini spacecraft in the ice grains emitted from Saturn’s moon Enceladus. Powerful hydrothermal vents eject material from Enceladus’ core into the moon’s massive subsurface ocean. After mixing with the water, the material is released into space as water vapor and ice grains. Condensed onto the ice grains are nitrogen- and oxygen-bearing organic compounds. Credit: NASA/JPL-Caltech.

So let’s clarify the process. What the Cosmic Dust Analyzer is looking at appears to be organics that would have been dissolved in the ocean beneath Enceladus’ surface. These would have evaporated from the ocean and then condensed, freezing on ice grains inside fractures in the crust. Rising plumes would have accounted for these materials being blown into space.

We begin to get a window into what might be produced within the ocean, though the view is preliminary. In the excerpt below, note that the scientists classify various types of ice grains on Enceladus according to a taxonomy: Type 1 represents grains of almost pure water ice, Type 2 shows features consistent with grains containing significant amounts of organic material, and Type 3 is indicative of salt-rich water ice grains. The study homes in on Type 2:

It is highly likely that there are many more dissolved organic compounds in the Enceladean ocean than reported here… In this investigation of Type 2 grains, the initial constraints, in particular the choice of salt-poor spectra, favoured the identification of compounds with high vapour pressures. Despite the expected solubility of potential synthesized intermediate- or high-mass compounds, their low vapour pressures mean that they will not efficiently evaporate at the water surface and thus remain undetectable not only in the vapour, but also those Type 2 grains forming from it. Potential soluble biosignatures with higher masses might therefore be found in spectra from Type 3 grains, which are thought to form from oceanic spray (Postberg et al. 2009a, 2011). Finding and identifying such biosignatures will be the main goal of future work. 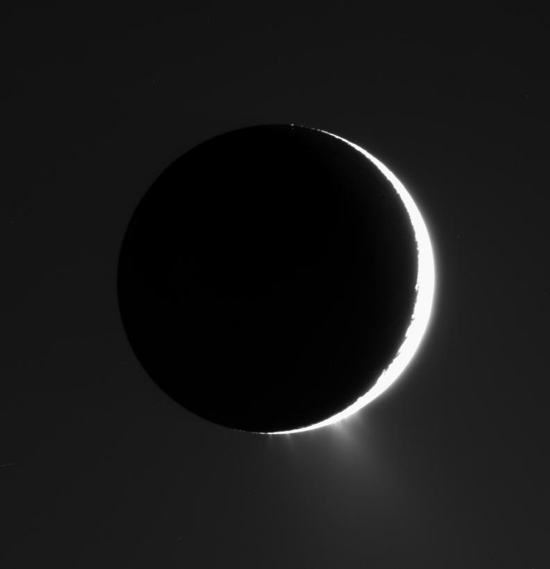 Image: With Enceladus nearly in front of the Sun from Cassini’s viewpoint, its icy jets become clearly visible against the background. The view here is roughly perpendicular to the direction of the linear “tiger stripe” fractures, or sulci, from which the jets emanate. The jets here provide the extra glow at the bottom of the moon. The general brightness of the sky around the moon is the diffuse glow of Saturn’s E ring, which is an end product of the jets’ material being spread into a torus, or doughnut shape, around Saturn. North on Enceladus (505 kilometers, or 314 miles across) is up and rotated 20 degrees to the left. Credit: NASA/JPL/Space Science Institute.

The researchers believe that similarities between the hydrothermal environment found on Enceladus and what we see on Earth prioritizes the exploration of the Saturnian moon for life. After all, we know of many places on our planet where life develops without sunlight, with the vents supplying the energy that fuels reactions leading to the production of amino acids. Despite the remarkable strides made by Cassini, its Cosmic Dust Analyzer was not, the authors say, designed for deep probing of this question. That makes high-resolution mass spectrometers a key component of any dedicated mission designed to explore the organic chemistry beneath the ice.

Next post: Voyager: Pressure at the Edge of the System

Previous post: Alan Boss: The Gas Giants We Have Yet to Find