Voyager: Pressure at the Edge of the System

One of these days we’ll have a spacecraft on a dedicated mission into the interstellar medium, carrying an instrument package explicitly designed to study what lies beyond the heliosphere. For now, of course, we rely on the Voyagers, both of which move through this realm, with Voyager 1 having exited the heliosphere in August of 2012 and Voyager 2, on a much different trajectory, making the crossing in late 2018. Data from both spacecraft are filling in our knowledge of the heliosheath, where the solar wind is roiled by the interstellar medium.

A new study of this transitional region has just appeared, led by Jamie Rankin (Princeton University), using comparative data from the time when Voyager 2 was still in the heliosheath and Voyager 1 had already moved into interstellar space. Leaving the heliosheath, the pressure of the Sun’s solar wind is affected by particles from other stars, and the magnetic influence of our star effectively ends. What the scientists found is that the combined pressure of plasma, magnetic fields, ions, electrons and cosmic rays is greater than expected at the boundary.

“In adding up the pieces known from previous studies, we found our new value is still larger than what’s been measured so far,” said Rankin. “It says that there are some other parts to the pressure that aren’t being considered right now that could contribute.” 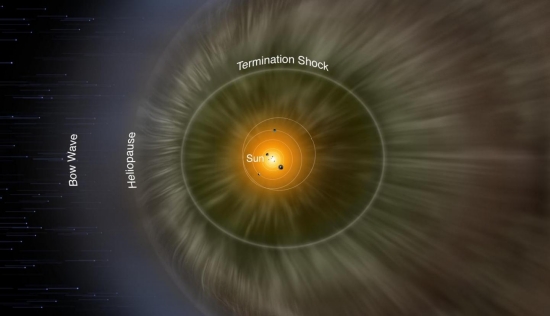 Image: This is an illustration depicting the layers of the heliosphere. Credit: NASA/IBEX/Adler Planetarium.

Thus the Voyager data continue to be robust, giving us a look into a dynamic and turbulent region through which future missions will have to pass. The particular area that the study’s authors focused on is called a global merged interaction region, a wave of outrushing plasma produced by bursts of particles from the Sun in events like coronal mass ejections. Such an event is visible in Voyager 2 data from 2012, causing a decrease in the number of galactic cosmic rays, one that Voyager 1 would go on to detect four months later.

Traveling at nearly the speed of light, galactic cosmic rays are atomic nuclei from which all of the surrounding electrons have been stripped away. The difference between how this change in their numbers was detected by the two spacecraft is instructive. Still within the heliosheath at the time, Voyager 2 saw a decrease of galactic cosmic rays in all directions around the spacecraft, whereas at Voyager 1’s vantage beyond the heliosphere, only those galactic cosmic rays traveling perpendicular to the magnetic fields in the region decreased.

This intriguing asymmetry flags the crossing of the heliosheath, though the study’s authors are quick to point out that why this directional change in cosmic rays occurs remains unknown. They are able to calculate the larger than expected total pressure in the heliosheath, and discover that the speed of sound in the heliosheath is roughly 300 kilometers per second (remember that the speed of sound in any medium is simply the speed at which disturbances in pressure propagate, in this case the result of interactions in the solar wind). 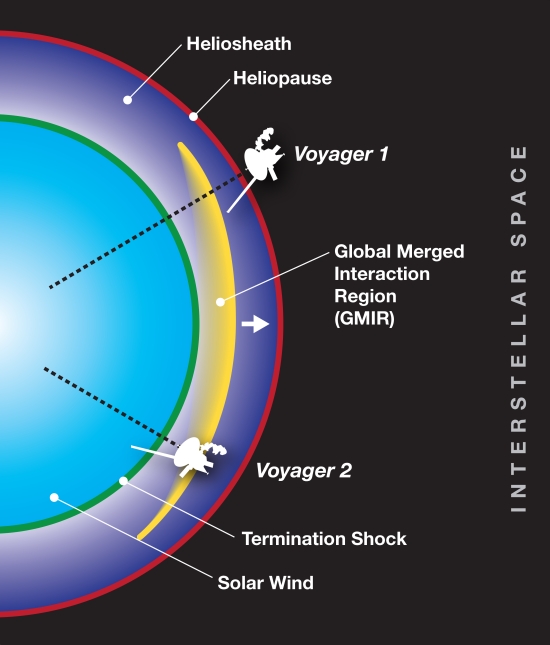 Image: The Voyager spacecraft, one in the heliosheath and the other just beyond in interstellar space, took measurements as a solar event known as a global merged interaction region passed by each spacecraft four months apart. These measurements allowed scientists to calculate the total pressure in the heliosheath, as well as the speed of sound in the region. Credit: NASA’s Goddard Space Flight Center/Mary Pat Hrybyk-Keith.

“There was really unique timing for this event because we saw it right after Voyager 1 crossed into the local interstellar space,” Rankin said. “And while this is the first event that Voyager saw, there are more in the data that we can continue to look at to see how things in the heliosheath and interstellar space are changing over time.”