The Russian space agency Roscosmos, as most of you know, has announced the death of cosmonaut Alexei Leonov, who died last Friday at Moscow’s Burdenko Hospital following a long illness. He was 85.

If handling stress under extreme conditions is a prerequisite for someone who is going to the Moon, Leonov had already proven his mettle when the Soviet Union chose him as the man to pilot its lunar lander to the surface. The failure of the N-1 rocket put an end to that plan, but Leonov will always be associated with the 1965 mission aboard Voskhod 2 shared with Pavel Belyayev. This was the spacewalk mission, conducted successfully before NASA could manage the feat 10 weeks later. 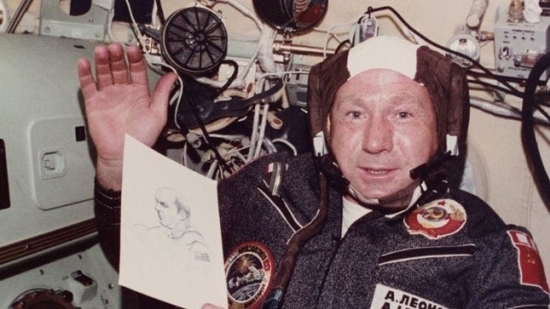 Image: A man and his art. Alexei Leonov was as attracted to drawing and painting as he was to flying, creating some work while in orbit. Credit: Roscosmos.

The problems Leonov had with his bulky spacesuit as it ballooned out of shape are widely known, making his re-entry into the capsule a dicey affair, though one he managed with skilful use of a bleed valve in the suit’s lining. But consider everything else that went wrong: The charge fired to remove the airlock caused Voskhod 2 to tumble, while oxygen levels in the cabin began to rise and took several hours to correct.

Add to this the failure of the automated re-entry system, and the tangled separation of the orbital module from the landing capsule, caused by a communications cable that had failed to separate. It was the heat of re-entry itself that finally burned through the cable and allowed the landing module to bring both cosmonauts home. Then they landed so far downrange from their intended target that two days passed before they could be reached in a taiga forest in the Ural Mountains. 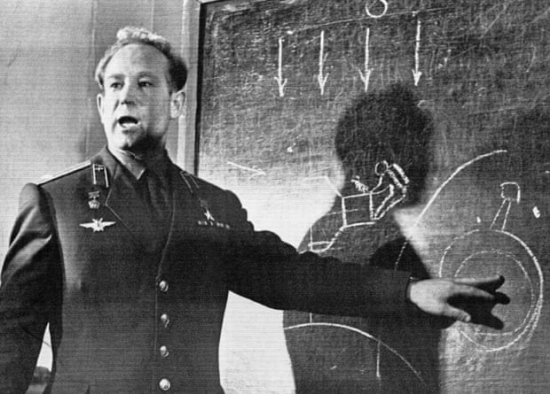 This was indeed the kind of man the Soviet Union would have liked to place on the Moon ahead of the Apollo astronauts, but it was not to be. Leonov, who went on to be given the title of Chief Cosmonaut, is also remembered for the Soyuz he piloted and docked with an Apollo capsule in 1975 in the Apollo Soyuz Test Project, which was the first mission conducted jointly between the US and the Soviet Union. A self-taught artist, Leonov created what as far as I know is humanity’s first artwork in space when he did a colored pencil drawing of a sunrise as seen from Voskhod 2.

Stanley Kubrick’s 1968 film 2001: A Space Odyssey included recordings of Leonov’s breathing in space, a great move by a great director, but the later 2010 (directed not by Kubrick but Peter Hyams) would provoke an official response. Twice made Hero of the Soviet Union, but later suspected of disloyalty to the government, Leonov had been brought before the Central Committee of the Communist Party to explain the fact that the spaceship named ‘Leonov’ in the film (nice touch by Clarke) had been filled with Soviet dissidents. Leonov is said to have responded that the committee “was not worth the nail on Arthur C. Clarke’s little finger.”

A quote from Leonov’s Two Sides of the Moon: Our Story of the Cold War Space Race (Thomas Dunne Books, 2004), written with NASA astronaut David Scott, may be the best way to end as we consider how close this man came to being first on the Moon. The time is early 1966, and Soviet Luna probes had completed a series of missions in lunar orbit. Leonov recalls:

I was undergoing intensive training for a lunar mission by this time. In order to focus attention and resources our cosmonaut corps had been divided into two groups. One group, which included Yuri Gagarin and Vladimir Komarov, was training to fly our latest spacecraft — Soyuz — in Earth orbit…

The second group, of which I was commander, was training for circumlunar missions in a modified version of Soyuz known as the L-1, or Zond, and also for lunar-landing missions in another modified Soyuz known as the L-3. Vasily Mishin’s cautious plan called for three circumlunar missions to be carried out with three different two-man crews, one of which would then be chosen to make the first lunar landing.

The initial plan was for me to command the first circumlunar mission, together with Oleg Makarov, in June or July 1967. We then expected to be able to accomplish the first Moon landing — ahead of the Americans — in September 1968.

Alternate histories are fascinating to consider. But no matter which timeline we dwell in, Alexei Leonov was a courageous, generous man who carried the spirit of that insanely adventurous era. It’s a spirit we can strive to recover.

Previous post: Voyager: Pressure at the Edge of the System