NASA collaborates with the German Aerospace Center (DLR) on one of our more interesting observatories. SOFIA, the Stratospheric Observatory for Infrared Astronomy, is a Boeing 747 aircraft that flies an infrared telescope with a 2.7 m diameter mirror. Located on the port side of the fuselage near the tail, the telescope houses a number of instruments for infrared astronomy at wavelengths from 1–655 micrometers (μm). One of these is FORCAST (Faint Object Infrared Camera for the SOFIA Telescope), which has now spotted an intriguing phenomenon, one that may be flagging a collision of two exoplanets.

The stars in question form a double system called BD +20 307, some 300 light years from Earth. Note the age of this system, about one billion years, an important consideration in what follows. About ten years ago, observations from the Spitzer instrument as well as ground observatories produced evidence of warm debris here, whereas from age alone, we would have expected warm circumstellar dust to have disappeared, just as it has in our own system.

What SOFIA brings to the table is a new set of measurements that shows the infrared brightness from the debris at BD +20 307 has increased by more than 10 percent in a time period of 10 years. We don’t usually find this kind of rapid fluctuation when studying what ought to be the gradual evolution of a planetary system, especially not in one as mature as this. There should be little dust here to begin with, much less warm dust, and while there are other possible mechanisms in play (see below), the rapid pace implies a collision.

“This is a rare opportunity to study catastrophic collisions occurring late in a planetary system’s history,” said Alycia Weinberger, staff scientist at the Carnegie Institution for Science’s Department of Terrestrial Magnetism in Washington, and lead investigator on the project. “The SOFIA observations show changes in the dusty disk on a timescale of only a few years.” 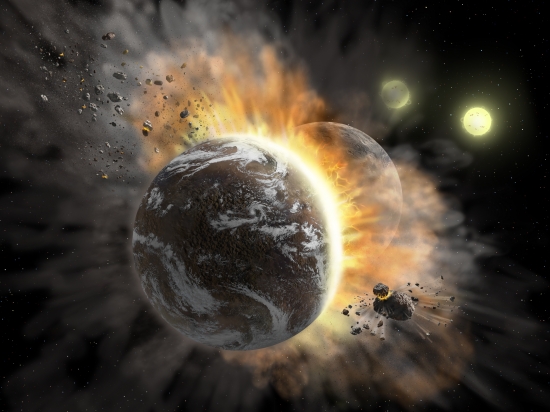 Image: Artist’s concept illustrating a catastrophic collision between two rocky exoplanets in the planetary system BD +20 307, turning both into dusty debris. Ten years ago, scientists speculated that the warm dust in this system was a result of a planet-to-planet collision. Now, SOFIA found even more warm dust, further supporting that two rocky exoplanets collided. This helps build a more complete picture of our own Solar System’s history. Such a collision could be similar to the type of catastrophic event that ultimately created our Moon. Credit: NASA/SOFIA/Lynette Cook.

We investigated several mechanisms that could cause the observed changes in the disk flux, including making the dust grains hotter, either through an increase in stellar luminosity or moving the dust grains closer to the stars, or increasing the number of dust grains in the system. If the origin of the copious amount of warm dust orbiting BD +20 307 is an extreme collision between planetary-sized bodies, then this system may help unlock clues into planetary systems around binary stars, along with providing a glimpse into catastrophic collisions occurring late in a planetary system’s history.

It’s also true that gaining a stronger understanding of dusty debris disks should give us insights into how binary systems evolve, useful as we investigate such interesting places as the Alpha Centauri triple system. If we are indeed looking at the result of a major collision at BD +20 307, further work should illuminate the kind of catastrophes we find evidence for in the Solar System, from our Moon’s formation (likely through an impact with a Mars-sized object) to the huge axial tilt of Uranus, which is probably the result of multiple impacts. The authors argue that new SOFIA observations at a wider wavelength range out to 20 µm will allow us to draw more definitive conclusions.