Benefits of a ‘Snow Line’ Neptune

The formation of planets like Neptune under the core accretion model involves a protoplanetary core that reaches around 10 Earth masses before beginning to pull in surrounding gas, the latter being a runaway process that quickly builds the atmosphere around the object. Core accretion is most efficient at doing this just outside the snow line, but if we want to understand and test the theory, we need to know a lot more about how planets are distributed in this region.

And that’s a problem, because recent microlensing surveys have found that planets like Neptune are most abundant much more distant from their host stars. Outward migration can account for such worlds, but we know little about exoplanets that form at the snow line, which is where the condensation of ices can factor into the emergence of a new world.

Is this just an artifact of our still evolving microlensing detection techniques? Perhaps, and exceptions to the rule can therefore be helpful. Recent work that began with a discovery by a Japanese amateur astronomer has now blossomed into a full-scale study of a snow line Neptune around a star that, unlike most viewed by microlensing, is actually fairly close. The amateur, Tadashi Kojima in Gunma Prefecture, Japan, found the object in Taurus, the beginning of observations from numerous observatories that uncovered the microlensing behind the discovery.

The planet Kojima-1Lb orbits a star 1600 light years away, while the star it passed in front of is some 2600 light years out. Remember that the curvature of spacetime in the presence of massive objects accounts for this phenomenon, as warped space around the nearby star acts as a lens that focuses the light from the background star. Within this brightening, a transient but useful phenomenon, changes in intensity can reveal a planet orbiting the foreground star, as happened here. This discovery is unusual because most microlensed planets have been observed toward galactic center, which makes sense given the sheer abundance of stars there. This one is found close and toward the galactic anticenter. 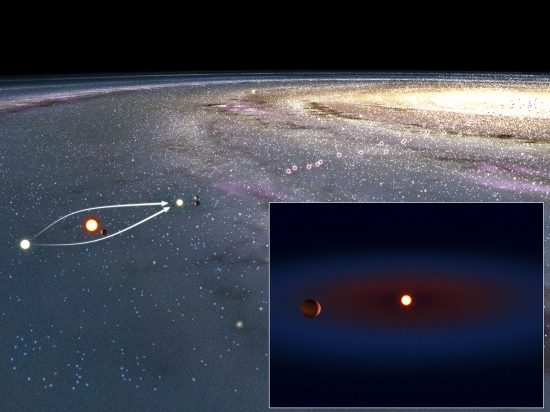 76 days of observation by a team led by Akihiko Fukui at the University of Tokyo took advantage of 13 telescopes around the world, including two at the National Astronomical Observatory of Japan’s Okayama Astrophysical Observatory. The work, as revealed in a paper just published in the Astronomical Journal, show a Neptune-class planet orbiting a star on the border line between K and M-class dwarf status. The planet is about 20 Earth masses and orbits at 1.08 AU, snow line distance for this system.

So we’ve got a helpful Neptune at the snow line. The paper draws an interesting but highly tentative conclusion from this detection:

The orbit of Kojima-1Lb is a few times closer to the host star than the other microlensing planets around the same type of star and is likely comparable to the snow-line distance at its youth. We have estimated that the detection efficiency of this planet in this event is ∼35%, which may imply that Neptunes are common around the snow line.

In other words, Fukui and colleagues calculate the a priori detection probability of this kind of planet at 35 percent, making this chance detection a possible indication of an abundance of such worlds around the snow line of other stars. The paper goes on to point out that the host star here is the brightest among all those studied in microlensed systems, offering the opportunity to do follow-up spectroscopic analysis to characterize the host star and to refine both mass and orbit of the planet through radial velocity studies.

Next post: Gas Giants on Eccentric Orbits: ‘Wrecking Balls’ for the Inner System?