We often think of Jupiter as a mitigating influence on asteroid or comet strikes in the inner system, its gravity changing the trajectories of potential impactors. That would make gas giants a powerful determinant of the survivability of Earth analogues, at least in terms of habitability. While we continue to investigate the question, it’s interesting to consider the damage a gas giant on an elliptical orbit might do to habitable zone planets. Stephen Kane (UC-Riverside), working with Caltech astronomer Sarah Blunt, decided to find out what would happen if, in their modeling, they introduced an elliptical gas giant into the system of an Earth twin.

You may remember Kane’s work earlier this year combining radial velocity with direct imaging methods to find three gas giants that had been previously unobserved (citation below). The monitoring of ten target stars continues even as this new work is published. We’re beginning to find more planets at ever larger distances from their stars as radial velocity and direct imaging methods improve, allowing us to better understand how the architecture of our own Solar System measures up to systems around other stars. Kane and Blunt’s paper implies that a gas giant on an elliptical orbit does not necessarily preclude a habitable planet’s survival.

The planetary system at HR 5183 is a little over 100 light years away in Virgo, home to an eccentric gas giant in a 75 year orbit that the researchers used in their modeling. The primary here is a G-class star. Its planet has one of the longest orbital periods currently known among exoplanets. The eccentricity of this world is e = 0.84, where e = 0 would be perfectly circular, and e = 1 would be a line segment. To find out whether such a world really would be a ‘wrecking ball’ for its neighbors, the researchers introduced a habitable zone terrestrial world as a test case to study extreme system architectures and their effects on habitability. 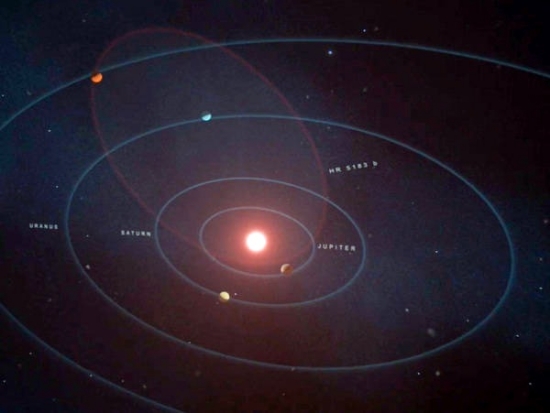 Image: Comparison of HR 5183b’s eccentric orbit to the more circular orbits of the planets in our own solar system. Credit: W. M. Keck Observatory/Adam Makarenko.

The dynamical simulations here involved the exploration of 200 evenly spaced semi-major axes between 1.0 and 3.0 AU, intended to encompass the range of the optimistic habitable zone around such a star. Kane and Blunt then placed an Earth-mass planet at randomized starting positions and propagated the effects of the eccentric gas giant over time. Says Kane:

“In these simulations, the giant planet often had a catastrophic effect on the Earth twin, in many cases throwing it out of the solar system entirely. But in certain parts of the planetary system, the gravitational effect of the giant planet is remarkably small enough to allow the Earth-like planet to remain in a stable orbit.”

This being the case, we’re called upon to imagine the view from the surface of a habitable zone planet in this system. The gas giant is on a 75 year orbit, something akin to Halley’s Comet in our own system. Kane says that when the gas giant makes its closest approach to the terrestrial planet during that orbit, it would appear 15 times brighter than Venus, a spectacular object that would dominate the night sky before receding once again into the outer reaches.

Here’s a clip from the paper talking about the significance of these findings. Note that the Milankovitch cycles discussed below are cyclical movements — eccentricity, axial tilt, and precession — related to a planet’s orbit around a star. From the paper:

The importance of such systems from a planetary habitability perspective arises from a thorough investigation of the dynamical stability of terrestrial planetary orbits, such as the one presented here. The careful analysis of the dynamical integrations demonstrates that planets can survive within a narrow range of locations in the HZ of such systems, even in the presence of a wrecking ball whose orbital origin is likely a chaotic event involving vast exchanges of angular momentum.

So we have planetary survival in certain locations, but habitability is severely challenged:

…the case of the HR 5183 system also shows that the presence of an eccentric planet will often have a profound effect on the Milankovitch cycles of the HZ terrestrial planetary orbits, causing significant orbital oscillatory behavior. The implications for the climate effects on such worlds may rule out temperate surface conditions, although the stabilizing effects of surface liquid water oceans can also potentially prevent a climate catastrophe.

In other words, our terrestrial world in its habitable zone orbit in a system with a highly eccentric gas giant is in a dangerous position indeed, though not one that completely rules out life. This seems to represent a slight widening of habitable zone possibilities as we examine exoplanetary systems, though the ‘wrecking ball’ hypothesis still seems the most likely outcome.

The paper is Kane & Blunt, “In the Presence of a Wrecking Ball: Orbital Stability in the HR 5183 System,” Astronomical Journal Vol. 158, No. 5 (31 October 2019). Abstract / Preprint. The paper on gas giant detection is Kane et al., “Detection of Planetary and Stellar Companions to Neighboring Stars via a Combination of Radial Velocity and Direct Imaging Techniques,” accepted at the Astronomical Journal. Preprint.