It’s heartening to consider that the two Voyager spacecraft, though built for a 4 ½ year mission, have continued to function ten times longer than that. This fact, and data from other missions, will help us get a handle on longevity in spacecraft systems as we contemplate pushing out beyond the heliosphere with a spacecraft specifically designed for the job. Mission longevity is mysterious for it often seems to surprise even the designers, who would like to have a more concrete sense of how to ensure operations continue for decades.

Voyager 2 broke Pioneer 6’s record of 12,758 days of operation way back in 2012, but we can also consider spacecraft like Landsat 5, launched in 1984 and carrying two instruments, the Multispectral Scanner System (MSS) and the Thematic Mapper (TM). Managed by the U.S. Geological Survey (USGS), Landsat 5 completed over 150,000 Earth orbits and sent back more than 2.5 million images of Earth’s surface, with operations lasting almost three decades. Design life for Landsat 5 was estimated at three years, but it became, as Guinness World Records labels it, the ‘longest-operating Earth observation satellite.’

While the Landsat accomplishment is significant, the two Voyagers have actually taken us into a new realm, with Voyager 2 joining Voyager 1 beyond the heliosphere on November 5, 2018. Outside the protective ‘bubble’ blown by the stream of particles and magnetic fields from the Sun known as the solar wind, these craft are now the subject of five new research papers in Nature Astronomy describing the data Voyager 2 has returned since the crossing. Have a look at the relative position of the two spacecraft. 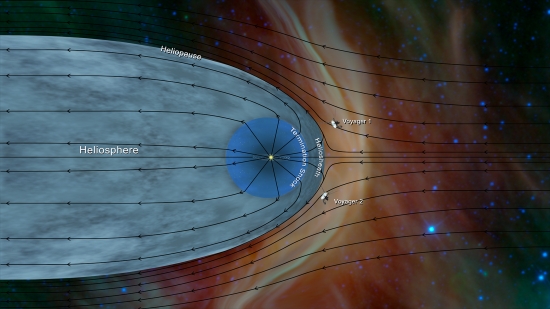 Note the plasma flow lines both inside and outside the heliopause. Plasma is a gas composed of charged particles, a ‘wind’ that differs in direction depending on whether its source is the Sun or the interstellar medium itself. The Voyagers have two instruments returning data on plasma at the borderline between the Sun’s domain and interstellar space. The data show hot and sparse plasma inside the heliosphere, while interstellar plasma is colder and denser. We learned from Voyager 1 that the heliosphere protects the Solar System from about 70 percent of the incoming cosmic ray radiation, which is made up of particles accelerated by exploding stars.

While Voyager 1 showed higher than expected plasma density just outside the heliosphere (an indication, researchers say, of compression), Voyager 2’s findings demonstrated slightly warmer plasma than expected, while confirming the compression at the edge of the heliosphere. Meanwhile, the spacecraft’s particle instruments (two of the five still operating instruments can detect particles in different energy ranges) showed some particles slipping across the boundary into interstellar space, indicating a more porous boundary in Voyager 2’s location outside the ‘flank’ of the heliosphere, as opposed to Voyager 1’s exit at its front.

“The Voyager probes are showing us how our Sun interacts with the stuff that fills most of the space between stars in the Milky Way galaxy. Without this new data from Voyager 2, we wouldn’t know if what we were seeing with Voyager 1 was characteristic of the entire heliosphere or specific just to the location and time when it crossed.”

Having two spacecraft leaving the heliosphere has been a tremendous boon for science. Voyager 1 and Voyager 2 exited the heliosphere at different locations as well as at different times in the 11-year solar cycle. The latter keeps the solar wind mutable and frothing, something to be borne in mind when we consider spacecraft designs that could ‘sail’ on this wind, and affects the shape of the heliosphere itself, whose boundaries vary with solar changes. We learn from the new papers that neither Voyager is in undisturbed interstellar space, but rather in a churning transitional region, outside the heliosphere but still affected by its presence.