The question of habitability on planets around M-dwarfs is compelling, and has been a preoccupation of mine ever since I began working on Centauri Dreams. After all, these dim red stars make up perhaps 75 percent of the stars in the galaxy (percentages vary, but the preponderance of M-dwarfs is clear). The problems of tidal lock, keeping one side of a planet always facing its star, and the potentially extreme radiation environment around young, flaring M-dwarfs have fueled an active debate about whether life could ever emerge here.

At Northwestern University, a team led by Howard Chen, in collaboration with researchers at the University of Colorado Boulder, NASA’s Virtual Planet Laboratory and the Massachusetts Institute of Technology, is tackling the problem by combining 3D climate modeling with atmospheric chemistry. The paper on this work, in press at the Astrophysical Journal, examines how general circulation models (GCM) have been able to simulate the large-scale circulation and climate system feedbacks on planets around red dwarfs, but these models have not accounted for atmospheric chemistry-driven interactions that the authors believe are critical for habitability. Thus so-called coupled chemistry-climate models (CCM) are needed to factor in how an atmosphere responds to the star’s radiation.

The study takes both ultraviolet radiation (UV) from the star and the rotation of the planet into consideration, noting how UV affects gases like water vapor and ozone. Says Chen:

“3D photochemistry plays a huge role because it provides heating or cooling, which can affect the thermodynamics and perhaps the atmospheric composition of a planetary system. These kinds of models have not really been used at all in the exoplanet literature studying rocky planets because they are so computationally expensive. Other photochemical models studying much larger planets, such as gas giants and hot Jupiters, already show that one cannot neglect chemistry when investigating climate.” 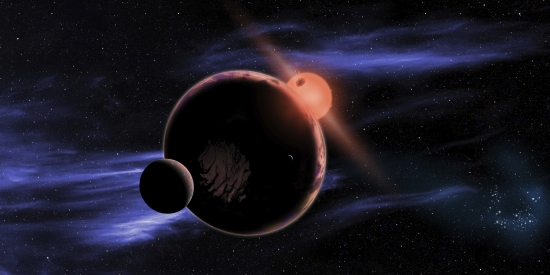 The researchers simulate the atmospheres of synchronously-rotating planets (i.e., with one side always facing the star) at the inner edge of the habitable zones of both K- and M-class stars. using numerical simulations of climate coupled with photochemistry and atmospheric chemistry through their 3D CCM. They find that the thin ozone layers produced on planets around active stars can render an otherwise habitable planet (in terms of surface temperatures) hazardous for complex life, as there is insufficient ozone to block UV radiation from reaching the surface.

Active photochemistry is a crucial issue, for according to Chen and team, planets can also lose significant amounts of water due to vaporization. Added to the ozone issue, we find boundaries beyond which a planet habitable in terms of liquid water on the surface is rendered lifeless. Understanding stellar activity becomes a predictive tool for gauging which M-dwarfs are most likely to merit precious telescope time for future missions looking for biosignatures. More active M-dwarfs appear far less likely to host life-bearing planets. From the paper:

…we find that only climates around active M-dwarfs enter the classical moist greenhouse regime, wherein hydrogen mixing ratios are sufficiently high such that water loss could evaporate the surface ocean within 5 Gyrs. For those around quiescent M-dwarfs, hydrogen mixing ratios do not exceed that of water vapor. As a consequence, we find that planets orbiting quiescent stars have much longer ocean survival timescales than those around active M-dwarfs. Thus, our results suggest that improved constraints on the UV activity of low-mass stars will be critical in understanding the long-term habitability of future discovered exoplanets (e.g., in the TESS sample…)

The effects of stellar UV radiation become a useful predictive tool as we narrow the target list. Vertical and horizontal winds in the upper atmosphere are strengthened as UV flux goes up. Moreover, the global distribution of ozone and hydrogen depends upon all these processes, which can affect the contrast between the dayside and nightside conditions under varying UV flux. The authors believe that only by bringing atmospheric chemistry into the picture of 3D modeling can we gauge whether a planet can attain true habitability and maintain it. Usefully, using their results, they show that both water vapor and ozone features could be detectable by instruments aboard the James Webb Space Telescope if we choose our targets carefully.

The paper is Chen et al., “Habitability and Spectroscopic Observability of Warm M-dwarf Exoplanets Evaluated with a 3D Chemistry-Climate Model,” in press at the Astrophysical JournaL (preprint).