While the majority of exoplanet-hosting stars discovered so far are single, we do have multiple star systems in various configurations with planetary companions. This is fertile ground for study, and not just because the nearest stellar system, Alpha Centauri, contains a tight binary pair that is being closely investigated for planets. The third star here is, of course, Proxima Centauri, around which we already know of the existence of a planet in the habitable zone. The much broader question is, how likely are multiple star systems to host planets?

Tackling this question in a new study is Markus Mugrauer (Friedrich Schiller University, Jena), who has been investigating how the existence of multiple stars in a system affects the formation and development of planets. Mugrauer has been working with the second data release from the European Space Agency’s Gaia mission (made available in April of last year). This release contains data collected by Gaia during the first 22 months of its mission. Mugrauer’s survey searched for stellar companions of 1367 exoplanet host stars within about 500 parsecs of the Sun, or roughly 1600 light years, as listed in the Extrasolar Planets Encyclopedia. 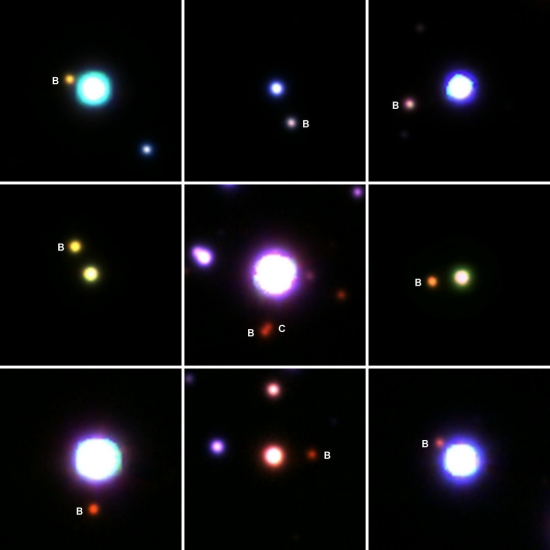 Image: These images show some of the exoplanet host stars with companion stars (B, C) that were found during the project. The images are RGB composite images taken with the Panoramic Survey Telescope and Rapid Response System (PanSTARRS) in the y- (960 nm), i- (760 nm), and g-band (480 nm). The image in the middle shows a hierarchical triple star system. Credit: Markus Mugrauer, PanSTARRS.

207 companion stars turn up in this work, varying strongly in mass, temperature and stage of stellar evolution. Of these, 176 are found to be binaries, 27 triple star systems, and one is a quadruple star system, which produces a multiplicity rate of about 15 percent. In each case, Mugrauer uses the Gaia data to demonstrate that the host stars are equidistant and share a common proper motion.

The heaviest of the companion stars weighs 1.4 solar masses; the lightest is a scant 8 percent of the Sun’s mass. As might be expected from their ubiquity, most companion stars turn out to be low-mass, cool red dwarf stars, although it’s interesting to note that eight white dwarfs are also found among the faint stellar companions. The projected separation between these exoplanet hosting systems ranges from 20 AU to 9100 AU, with the highest frequency being within 1000 AU (by comparison, the mean separation of Centauri A and B is 23 AU). 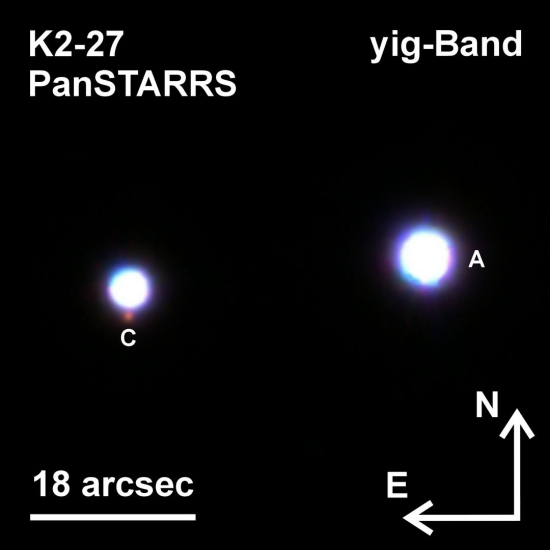 Image; A triple star system approx. 800 light years from the Earth in the Leo constellation with the planetary host star K2-27 (bright star on the left). The image is an RGB composite image taken with PanSTARRS in the y- (960 nm), i- (760 nm), and g-band (480 nm). To the right of it, the first companion star (A) can be clearly distinguished. Just below K2-27 is the second companion star (C) that glows faintly red. Credit: Markus Mugrauer, PanSTARRS.

The results point to what is likely the disruptive influence of several stars in a system where planets are forming, for Mugrauer’s 15 percent incidence of multiple star systems contrasts with the frequency of multiple systems in general. From the paper;

In order to compare the companion star fraction found in this study among exoplanet host stars to that of the solar like stars in general one has to consider only the range of projected separation of the companions detected here, i.e. 19 up to the applied search radius of 10 000 au. This requires the determination of the orbital periods of the detected companions, following the procedure, as described by Raghavan et al. (2010) for wide companions…

Working these calculations, Mugrauer comes up with the following:

The range of separation 19 up to 10 000 au corresponds to orbital periods log(P[d]) = 4.59–8.67. According to the period distribution of companions of solar like stars for this range of period one expect[s] a companion star fraction of 30 ± 2  per cent, which is about twice as large as the fraction found in the study, presented here, among exoplanet host stars.

In other words, the frequency of exoplanet-hosting multiple star systems is about half what we would expect for solar-like stars in general, and the distances between companion and primary star in exoplanet systems are roughly five times greater than in ordinary systems. We may be looking at the gravitational influence of the companion on the gas and dust disk out of which planets emerge. Says Mugrauer: “These two factors taken together could indicate that the influence of several stars in a star system disrupts the process of planet formation as well as the further development of their orbits.”

Mugrauer’s work is continuing via an international observing campaign being conducted at the Paranal Observatory of the European Southern Observatory in Chile, which will apply data from Gaia to more precisely characterize newly discovered planetary host stars and their companions.

Image: HIP116454 is a planetary host star in the Pisces constellation and it is approx. 200 light years from the Earth. The star is accompanied by a significantly fainter white dwarf (B). The image is an RGB composite image composed of images taken in the i- (760 nm), r- (620 nm), and g-band (480 nm) as part of the Sloan Digital Sky Survey (SDSS). Credit: Markus Mugrauer, SDSS.