Axial Tilt, Habitability, and Centauri B

Our fascination with Alpha Centauri doubtless propels at least some of the recent interest in binary star systems, as we ponder the chances for habitable worlds around the nearest stars. But given that the population of binary or multiple star systems in our galaxy is as high as it is (multiple systems are common, and about 50 percent of stars have binary companions), determining the factors that influence habitability in this environment has much broader significance. A new study out of the Georgia Institute of Technology has been looking at the issue by modeling an Earth twin in various binary scenarios.

So how does Alpha Centauri fare? We can find habitable zones in the Centauri A/B system, and into these the researchers introduced a simulated Earth around Centauri B to examine its axis dynamics. They also investigate the dynamical evolution of planets within the habitable zone of either star, generalizing from these results to the larger binary star population. The issue to be addressed: Does the axial tilt, or obliquity, of our planet, apparently a key feature in maintaining a habitable climate, survive the transition into a binary system with the features of Alpha Centauri? The answer is not encouraging for life, at least not around Centauri B. 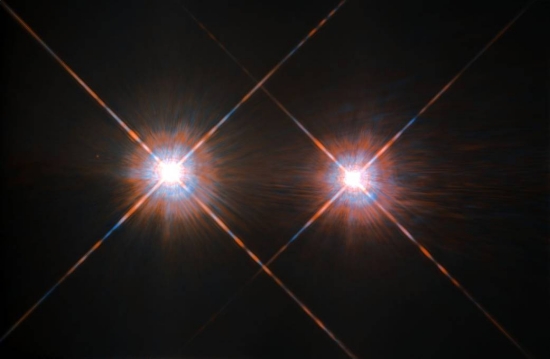 Image: The Alpha Centauri group is the closest star system outside of our own at a distance of 4.3 lightyears; it can be found in the night sky in the constellation Centaurus. The stars Alpha Centauri A and Alpha Centauri B comprise a binary system, in which the two stars orbit one another, and close by is an additional faint red dwarf, Alpha Centauri C, also called Proxima Centauri. Some astronomers have hoped to someday find an exoplanet capable of harboring advanced life in the system, but a new study lowers those expectations while raising them for the rest of the universe. Credit: NASA/ESA Hubble Space Telescope.

Remember that Centauri B, a K-class dwarf, and the G-class Centauri A orbit each other tightly, with an orbital period of 79.91 years. We’re dealing with an elliptical orbit that varies the distance between the two stars anywhere from 35 AU to 11 AU, the latter being not much further than Saturn is from the Sun in our own system. From the perspective of a planet orbiting Centauri B, Centauri A swings relatively close and then backs away during the 80-year period, causing the simulated Earth to vary considerably in terms of obliquity. The Moon is often cited as a help in stabilizing Earth’s axial tilt, but that doesn’t help here, says lead author Billy Quarles. 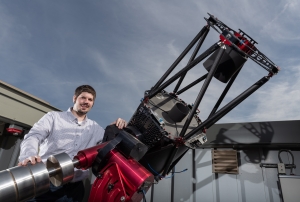 …the added spin precession from a Luna-like moon increases the obliquity variation of an Earth-like planet orbiting α Cen B, but a different type of moon, in terms of its mass or semimajor axis, may have a negligible or more beneficial effect.

And without a moon? Quarles again:

“The biggest effect you would see is differences in the climate cycles related to how elongated the orbit is. Instead of having ice ages every 100,000 years like on Earth, they may come every 1 million years, be worse, and last much longer.”

The separation of the two stars is the key here. According to this work, Centauri A and B are simply too close for comfort, but a wider separation, which holds in most binary systems, would allow the second star’s effects to be less disruptive to the simulated Earth. I was curious about the effects of a moon, though, and went further into the paper, which notes that the disruptive effects of a moon on a simulated Earth around Centauri B are:

…in contrast to our own Earth-based expectations, where our moon does the opposite (Laskar et al. 1993b). The amount of spin precession from a moon depends on the moon’s mass and semimajor axis, where a Pluto-mass moon at a Luna-like semimajor axis aluna would have a negligible effect. A smaller semimajor axis (0.2 aluna) would allow a Pluto-mass moon to increase the spin precession and allow for larger obliquity variations. The degree to which a moon can increase the overall spin precession depends on many factors, where they are neither needed nor necessarily even desirable to obtain relatively low obliquity variations. 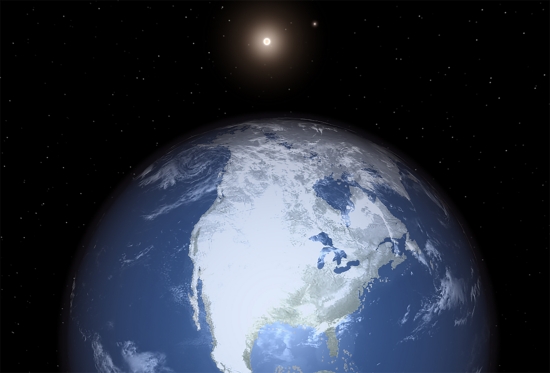 Image: Modeled into an orbit in the habitable zone around Alpha Centauri B, in this artist’s rendering by an author of a new study, our planet appears rather icy and inhospitable to advanced life. Credit: Georgia Tech / Billy Quarles.

Quarles points to Mars as an example of obliquity extremes influencing climate. The axial tilt of Mars varies between 10 and 60 degrees every 2 million years, as opposed to Earth’s axial tilt (between 22.1 and 24.5 degrees over a course of 41,000 years). Earth’s Moon stabilizes our planet’s obliquity, which would otherwise be affected by gravitational influences from the inner planets as well as Mars and Jupiter.

If the precession of Mars’ axis seems to have helped deplete its atmosphere, imagine an Earth precessing the same 60 degrees, which is the figure Quarles deduces for an Earth without its Moon. Clearly, the presence of a moon can have widely varying effects depending on the stellar masses and orbital parameters involved. We learn that the presence of a single large moon is just one factor in questions of habitability, and its effects are not always benign.

But the broader outlook for habitable zone planets in binary star systems seems encouraging. According to the study, a high percentage of such systems can support exo-Earths with axial tilts similarly steady to Earth’s, thus ensuring climate stability. Back to the paper:

All told, those aren’t bad numbers given the number of multiple star systems throughout the Milky Way. The paper shows us that the evolution in axial tilt for a single Earth-like planet in the habitable zone of a binary system depends on the orbital precession induced by the companion star, while also being influenced by orbital distance, nearby terrestrial planets and moons. It’s interesting, too, to see that many disks are misaligned by around 10 percent from the binary plane, which would produce a typical obliquity variation in the neighborhood of 20%. Clearly, orbiting nearly planar with the binary would be the most desirable place to be.

It’s worth noting that the Transiting Exoplanet Survey Satellite (TESS) is expected to uncover ∼500,000 eclipsing binary systems. We’ll have no shortage of candidates for further study. Both TESS and Gaia observations, the authors say, would allow a more robust statistical approach to emerge as we examine the obliquity of planets around Sun-like stellar binaries.

Next post: A Closer Look at an Interstellar Comet